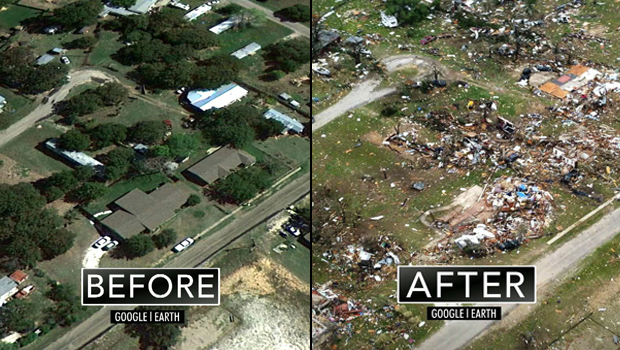 The National Weather Service estimates there to have been at least 10 twisters in all, reports CBS Dallas station KTVT.

The worst-hit city was Granbury, where authorities say a deadly tornado tore through two neighborhoods at about 8 p.m. Forecasters say the tornado is believed to have had winds up to 200 mph.

"The wind speed itself won't kill you, it's what's blowing around in the wind," National Weather Service meteorologist Kurt Vanspeybroeck told CBS Radio. "If you have a baseball coming at you at 200 miles an hour, it's going to kill you."

"Some were found in houses. Some were found around houses," Deeds said, adding that the death toll may climb. Seven people remained unaccounted as of Thursday morning.

Jamie Dugger and Manuel of Cleburne, Texas, said she knew something was wrong when she looked out to her porch. "I've seen a lot of green skies ... never a neon sky," Jamie told CBS News correspondent Manuel Bojorquez.

Resident Elizabeth Tovar (it is unclear if she is related to the deceased) described the fist-sized hail that heralded the tornado's arrival, prompting her and her family to hide in their bathroom.

"We were all, like, hugging in the bathtub and that's when it started happening. I heard glass shattering and I knew my house was going," Tovar said, shaking her head. "We looked up and . . . the whole ceiling was gone."

The powerful storm crushed buildings as it tore through the area, leaving some as just piles of planks and rubble. Trees and debris were scattered across yards, fences flattened.

Behind one house, a detached garage was stripped of most of its aluminum siding, the door caved in and the roof torn off. A tree behind the house was stripped of its branches and a vacant doublewide mobile home on an adjoining lot was torn apart.

Daniel and Amanda Layne initially thought they were safe sheltering under their carport. But then "it started getting worse and worse," and the couple took shelter in their bathroom, Daniel Layne said.

"The windows and the cars are gone. Both our cars are messed up. I had a big shop. Ain't a piece of it left now," Layne said with a shrug.

One woman, a mother of five, told KTVT she lost everything in an instant. "There's nothing left," she said. "I mean, our neighborhood is gone, it's just gone."

Hardest hit were two neighborhoods, Rancho Brazos Estates and DeCordova Ranch, in the southern end of the town of about 8,000 residents about 65 miles southwest of Dallas.

Ambulances from as far away as Fort Worth were being called to Granbury, said Tye Bell, Richland Hills police spokesman who was heading to Granbury on Wednesday night. On Thursday some residents were being kept from their houses because propane tanks could be leaking, CBS News correspondent Anna Werner reports.

Rancho Brazos Estates resident Elizabeth Tovar said she rode out the tornado with her husband and sister as she clutched her 9-month-old daughter.

"We heard the winds whipping and glass smashing everywhere," said Tovar, 25. "I felt like a long time and when things died down I looked up and saw that the roof was gone."

Another resident of that neighborhood, Allacia Jenny, said she witnessed devastation in her neighborhood.

"The house across from mine looked like it was destroyed," said Jenny, 22.

Toppled large trees littered her yard, and "I saw power lines all over the place," she said.

At Stumpy's Lakeside Grill in Lake Granbury, the storm took diners and workers by surprise. Some people rushed inside from the patio and ducked under tables as the wind gusts and hail started, but nobody was injured, said Eric Martinez, a cook. Then they looked across the lake and saw several homeowners' boat docks "just get torn apart," he said.

"The boat docks just flew off, and they're actually gone," Martinez said, adding that the boards and other debris landed in some yards.

The same storm spawned another tornado that storm spotters told the National Weather Service was a mile wide. That twister tore through the southwestern quadrant of Cleburne, a courthouse city of about 30,000 about 25 miles southeast of Granbury.

Mayor Scott Cain told CBS News that up to two dozen homes in Cleburne were "obliterated," and more than 100 homes sustained some damage in his city.

"It looks pretty much like a war zone," he said.

Cain credited effective storm warnings -- and residents taking heed of them -- for the fact that no one in his community died, which he called miraculous.

"Our citizens are now regrouping, looking after one another and making certain we've all got shelter and we're all taken care of," he said.

Another tornado hit the small town of Millsap, about 40 miles west of Fort Worth. Parker County Judge Mark Kelley said roof damage was reported to several houses and a barn was destroyed, but no injuries were reported.

Hail as large as grapefruit also pelted the area around Mineral Wells on Wednesday evening. A police dispatcher reported only minor damage.