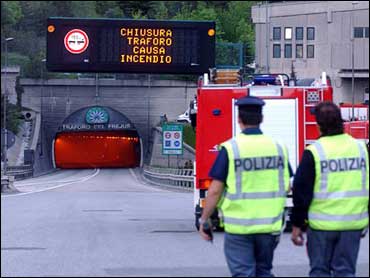 An eight-mile Alpine tunnel linking France and Italy will remain shut indefinitely so workers can clear out debris and check for structural damage, officials said Sunday, a day after trucks caught fire inside, killing two drivers.

The Frejus tunnel is a major thoroughfare linking the French city of Lyon with Turin, Italy, accounting for four-fifths of commercial roadway traffic between the countries.

Most of the truck traffic — about 3,800 trucks per day on average — likely would be rerouted through the Mont Blanc tunnel, requiring a 124-mile detour.

Coordination between the Italian and French firefighters was "great," Italian Transport Minister Pietro Lunardi said after meeting at the scene with his French counterpart, Dominique Perben.

"This accident will help to improve the level of security," Lunardi told Sky TG24 news.

He added that security was boosted in the tunnel after a 1999 Mont Blanc tunnel fire, but "it can be increased" further.

Lunardi said a French magistrate would lead a technical probe into the cause of the blaze, which burned six vehicles — the tire truck, a truck transporting glue, two other tractor-trailers and two fire vehicles.

French authorities said it was too early to tell whether the tunnel would remain shut during February's Winter Olympics in Turin, but Lunardi was hopeful it would reopen soon.

"From what they've told me, the damage isn't as serious as had been thought at first," Lunardi said, according to the ANSA news agency.

"This accident will help to improve the level of security," Lunardi told Sky TG24 news. He said security had been increased in the Frejus tunnel after the Mont Blanc tunnel fire, but "it can be increased" further.

Lunardi said the Frejus tunnel would be reopened as soon as possible.

"We are waiting to verify the stability of the tunnel," he said. "I think we will all work to open it as soon as possible."

Temperatures inside the Frejus tunnel reached up to 1,650 degrees, said Lt. Col. Michel Decker of the Savoie region fire brigade, adding that the glue contained polymer resins that grow toxic when heated.

Traffic through the eight-mile-long tunnel was halted as firefighters rushed into the passage, the national highway information center said. Authorities said the tunnel was fully evacuated, with only firefighters inside putting out the remnants of the blaze.

An investigation of the fire's cause was under way.

The tire truck was losing fuel before the fire broke out, said an official of Sitaf, the company that runs the Italian side of the tunnel, citing video from a closed-circuit camera inside.

"You can see the diesel that is leaking," the Italian news agency ANSA quoted Sitaf official Ugo Jallasse as saying. "The fuel ends up on the engine and goes on fire. In a moment, the vehicle is engulfed by fire."

The flames spread to two other vehicles within seconds, he said.

"All of a sudden, I saw smoke pour into the right side of my truck," Dalibor Biksanovic, a 23-year-old Serb, told ANSA. The agency identified him as the driver of the tire truck.

The blaze revived memories of the 1999 fire in the nearby Mont Blanc tunnel that killed 39 people. That fire burned for two days while firefighters tried to reach the trapped cars.

The Frejus tunnel has safety zones every 300 yards, and its fire alarm systems were renovated after the Mont Blanc tunnel fire.