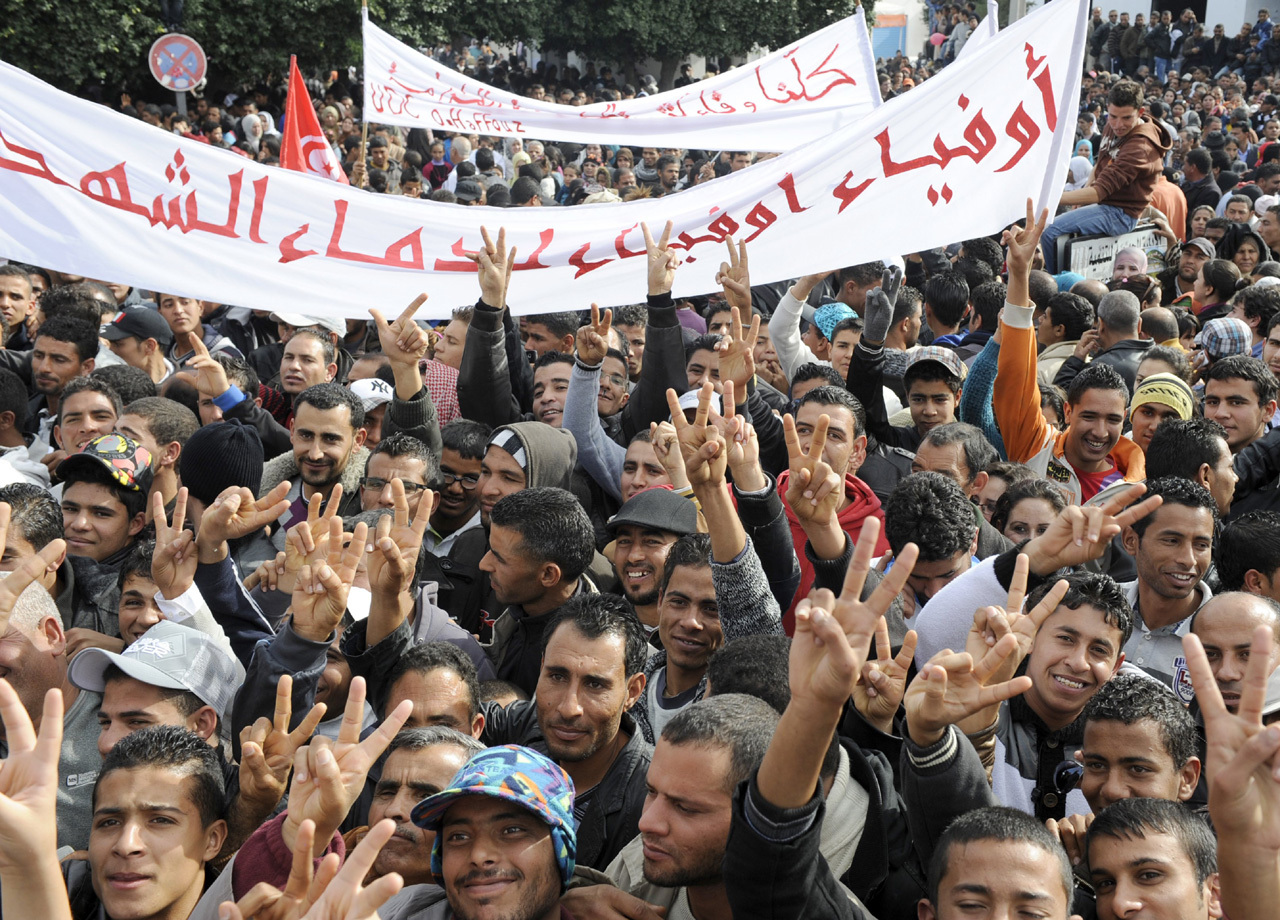 SIDI BOUZID, Tunisia - It was in this hardscrabble town in Tunisia's arid interior that exactly one year ago the death knell sounded for the decades-old system of dictatorships across the Arab world.

With a desperate act of self-immolation, a 26-year-old fruit-seller in Sidi Bouzid unwittingly unleashed a year of turmoil that toppled at least three autocrats in a region once thought to be immune to democracy.

Tunisia's new leaders are part of a festival for the revolution in Sidi Bouzid starting Saturday, to honor the vendor and the protesters whose indignance snowballed into a nationwide and then region-wide phenomenon.

The changes in the Arab world over the past 12 months cannot be overstated. A region synonymous with stagnant authoritarian republics and monarchies is suddenly rife with change — for better or worse.

The biggest winners so far appear to be the long-repressed Islamist parties, which didn't always lead the revolts but in the subsequent elections in Egypt, Tunisia and Morocco were the best organized and least tainted by the old regimes.

As the country that started the Arab Spring, Tunisia appears to be the farthest along in its transformation, having held its freest elections ever that brought to power a moderate Islamist party that most had thought had been oppressed out of existence.

European tourists knew Tunisia under former President Zine El Abidine Ben Ali for its sandy beaches and cosmopolitan ways, but for many of its people it was 23 years of suffocating iron-fisted rule.

Now a human rights activist is president and an Islamist politician who was jailed by Ben Ali for 15 years is the prime minister at the head of a coalition of left, liberal and religious parties.

The new president even announced on Friday that he was going to sell off his predecessor's many palaces to fund employment programs.

It was one year ago that Mohammed Bouazizi set himself on fire in front of the Sidi Bouzid town hall after he was publicly slapped and humiliated by a policewoman reprimanding him for selling his vegetables without a license. He suffered full-body burns, and died soon afterward.

Until then, he had spent his days pushing around a cart to sell his vegetables, but when his wares were confiscated and his pleas for restitution ignored by town officials, something snapped and a young man who had never left Tunisia transformed the Middle East.

His act struck a chord in the impoverished interior of the country, where unemployment is still estimated at 28 percent.

The demonstrations began in Sidi Bouzid but soon spread to the nearby city of Kasserine and surrounding small towns.

At first it was just local unrest, until clandestinely shot videos started popping up on Facebook and other social networking sites, inspiring youths across the country.

The focus of the protests soon moved to the capital Tunis as tens of thousands braved tear gas and battled police along the elegant, tree-lined boulevards. An estimated 265 Tunisians died in that month of protests that slowly drew the world's attention.

And then abruptly it was over. After Ben Ali's army refused to shoot the protesters and his security forces wavered, Ben Ali fled and flew to Saudi Arabia with his family on Jan. 14.

Experts were quick to explain how Tunisia was unique and the Jasmine Revolution was an isolated event — until 11 days later tens of thousands occupied Cairo's Tahrir Square and began chanting the same slogan heard in Tunisia: "The people want the fall of the regime."

Not even three weeks later, Egypt's army too turned on its commander in chief and 82-year-old Hosni Mubarak, who had ruled Egypt for almost three decades as the quintessential symbol of Middle East status quo, suddenly resigned.

Four days later, protesters hit the streets in Libya's second largest city of Benghazi, while Yemen began experiencing demonstrations of its own.

Morocco as well sprouted a pro-democracy movement that forced the king to scrabble to make reforms, and eventually even Syria — a nation famous for its repression — was awash in protests.

Bouazizi's plight was familiar across the region where growth had not provided jobs, education was poor and widespread restrictions on freedoms left a sense of hopeless frustration.

One year later, many countries are freer but the economic situation remains grim.

Tourists have been frightened away by the unrest, an economic crisis in Europe has damaged traditional export markets and the messy business of democracy has been slow to produce new governments.

Six weeks after its elections, Tunisia is forming its new government, but for the people of Sidi Bouzid, it feels like nothing has changed.

Even during October's elections, when much of the country was euphoric, the young men of Sidi Bouzid sat sullenly in their cafes and complained that they had been forgotten.

Now the focus has returned to this small town surrounded by olive orchards and tall groves of cactus, and a festival for the revolution will be held over the weekend.

There will be parades, poems and speeches by Tunisia's newly elected leaders while balloons the color of the red flag will be released into the air.

Tunisia's leaders have promised that the interior will no longer be neglected and say they have drawn up plans to rebalance investment away from the coast.

If they can succeed, even as the other countries in the region struggle with the complicated aftermaths of their own pro-democracy movements, Tunisia could once more inspire the Arab world.