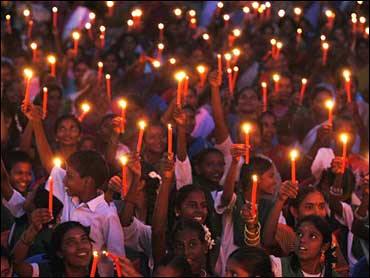 Marking the day six months ago that an earthquake and tsunami killed 178,000 people and left another 50,000 missing, volunteers in this Sri Lankan hamlet collected anything left from the rubble for an exhibition meant to help survivors mourn.

School bags, shoes, tea cups, television parts were all brought to a school in Vakarai, about 37 miles northeast of Batticaloa.

"This pair of shoes, my daughter liked most" read an inscription near a shoe.

Elsewhere across Asia, some places held ceremonies Sunday to mourn those lost and mark the day that devastated so many lives.

In India's worst affected area of Nagapattinam, a fisherman burned incense sticks before a coconut sapling planted by the shore. The plant, named after the fisherman Ravi Shankar's niece Nandini K., is among 207 saplings planted in the memory of children who died at the spot.

More than 11,000 people died in India, and fears of another tsunami linger, said Namaswaya, the head of a local fishermen cooperative in Nagapattinam.

"The water is very rough, so people don't want to go. There was also a rumor that there could be another tsunami at 6 a.m. today," he said.

In Indonesia, where people had gathered a day earlier to commemorate the 131,000 killed there, signs of hope mingled with new life as families filled the grounds of the Baiturrahman Grand Mosque in the heart of hardest-hit Banda Aceh and wedding parties were held throughout the provincial capital.

Clad in green and gold silk, with an elaborate headdress, Wanti Maulidar was nervously awaiting her groom for the traditional marriage ceremony.

"I realize today is the six-month anniversary of the tsunami, so there is a sad memory. But this is also a happy day for us and a way we can encourage others to look to a better future," she said.

Maulidar, 28, said she had already postponed her wedding earlier and did not want to wait longer to be married. But as an acknowledgment of the recent disaster, the couple decided to hold a modest party at home.

Still, things have improved since the day the huge lawn in front of the mosque flooded with debris-filled blackened water and piles of bodies. The lawn was green again with replanted grass, and wooden scaffolding surrounded the damaged minarets.

In Sri Lanka, where a deal with Tamil Tigers to distribute tsunami aid in rebel-held areas was signed only this week, the scale of the tragedy continues to haunt survivors, many of whom have yet to rebuild their homes and lives.

There were no memorials Sunday in a sprawling relocation village in eastern Sri Lanka, with survivors saying they want to leave the bitter memories behind and look to the future.

Some were busy laying foundations for new homes being built by a private relief group, while others mixed concrete or worked in vegetable gardens or small shops.

"I heard on the radio that today is the six-month anniversary," said 60-year-old Vairamuttu Kandasamy, who lost his wife to the waves on his 35th wedding anniversary.

He also lost a daughter and three grandchildren and now lives alone in a hut, one of dozens of temporary tin-roofed and thatched sheds that dot a vast stretch of sandy land. He survived the waves by climbing a coconut tree with one of his granddaughters.

Kandasamy's entire fishing village was relocated to Pattiadichchenai, several hundred yards from the sea, because of a government ban on reconstruction within 200 yards of the shore.

"The dead are gone now and the lost belongings are lost. Now we have to look after the survivors," said Kandasamy, who heads a group of 40 families in the village.

Thailand's once crowded tourist beaches were eerily quiet Sunday, with luggage still buried in the sand by the giant waves and posters for missing victims still hanging on palm trees as grim reminders of what happened.

In Thailand's hardest-hit Khao Lak resort area, some hotels are slowly being rebuilt, but others on Sunday appeared vacant or heaped in debris, with traces of the foreign tourists who once flocked to the area — partly buried bags, clothes wrapped around driftwood — littering the beach.

More than 5,300 people died and 2,900 went missing when the waves pummeled Thailand's southwestern coastline. Many of the victims were foreign travelers vacationing at beach resorts in Phang Nga province's Khao Lak district.

Hundreds of others died on the resort island of Phuket — the country's top tourist destination where hotel vacancies soared after the catastrophe.

At Phuket's most popular beach, Patong, a trickle of visitors played pool and drank beer early Sunday, while vendors sold souvenirs and snacks on nearby roads where some businesses were washed away.