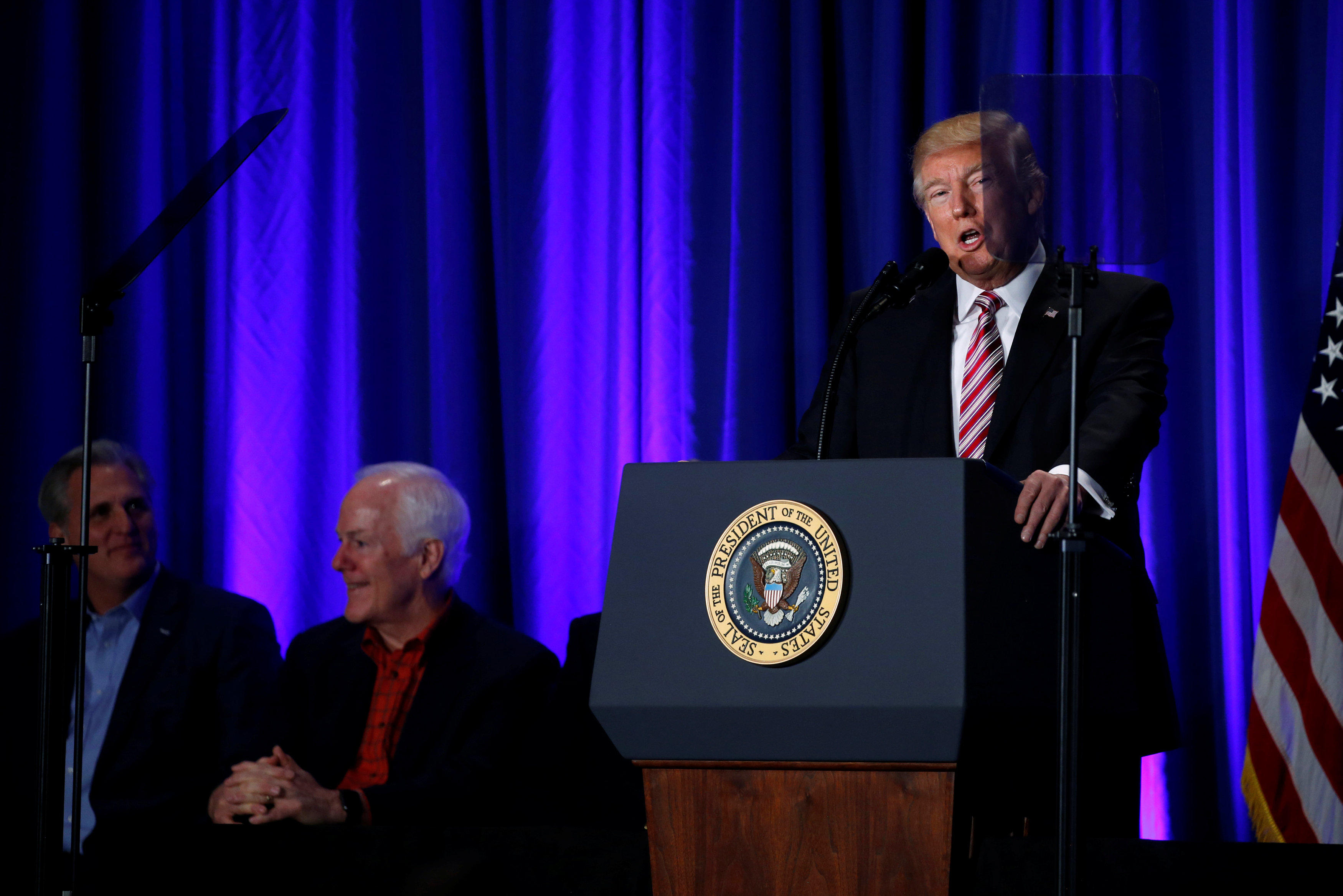 He began by ribbing Senate Majority Leader Mitch McConnell and House Speaker Paul Ryan about the party’s past two presidential losses before discussing his executive orders and his legislative agenda for the future.

“Nice to win. Do we agree?” Mr. Trump said at the beginning of his remarks. “It’s been awhile.”

But following his off-the-cuff comments at the start of his appearance, the president largely stuck with prepared remarks, reading off a teleprompter for the majority of the speech.

Here are the important points Mr. Trump touched on:

The president promised to “protect the integrity of the ballot box,” just as his White House announced Thursday that he would sign an executive action on voter fraud.

In the past, Mr. Trump has claimed without any evidence that millions of voters cast their ballots illegally and cost him the popular vote.

Of Philadelphia, the president said “the murder rate has been steadily -- I mean, just terribly increasing.” But according to local statistics from Philadelphia police, serious crime in the city fell to record levels last year.

According to the Philadelphia Inquirer, the statistics -- part of year-end uniformed crime reporting data provided by the Philadelphia Police Department -- showed that fewer violent crimes occurred in 2016 than in any other year since 1979.

On Chicago, where he vowed Tuesday night to “send in the Feds” because of its murder rate, Mr. Trump asked, “what the hell is going on?”

The president’s pledge comes just days after Kellyanne Conway, a senior adviser to Mr. Trump, pledged that no one would lose their health insurance during the transition from the ACA to any potential GOP replacement plan.

“For the 20 million who rely upon the Affordable Care Act in some form, they will not be without coverage during his transition time,” Conway told CBS’ “Face the Nation.”

Mr. Trump made further promises on building up the nation’s infrastructure

“The thing I do best in life is build,” he said.

The president added, however that roads and bridges need to get fixed before he would build new ones.

The president briefly made a comment about Friday’s conservative March for Life scheduled in the nation’s capital, less than a week after the more progressive Women’s March on Washington.

He complained that the media would not treat the anti-abortion march fairly, compared to how reporters covered the women’s marches protesting his presidency around the world just a day following his inauguration.

Discussing his recent executive action on building a border wall, the president assured the American people that they “will not pay for the wall.”

And he said he’s working on a tax reform bill that would include making Mexico foot the bill for the wall “if we decide to go that route.”

Mr. Trump also commented on the executive order he signed on immigration Wednesday, saying that it means the “immediate removal of criminal aliens” and “cracking down on sanctuary cities.”

Shortly before the president arrived at the retreat, Mexican President Enrique Peña Nieto tweeted that he had informed the White House he was calling off his trip to Washington, following Mr. Trump’s remarks on the border wall. At the retreat, President Trump told Repubicans, “The president of Mexico and myself have agreed to cancel the planned meeting” because such a gathering “would be fruitless and I want to go a different route.”

The president previewed how he would renegotiate trade deals, saying that any agreements signed with countries will be “one-on-one.”

“They won’t be a whole big mashpot,” Mr. Trump said.

He chastised Democrats for their inaction on confirming his commerce secretary pick, Wilbur Ross.

Mr. Trump discussed the executive actions he’s put into place in the first few days of his presidency, including orders on the Keystone XL and Dakota Access Pipelines.

He added: “If people want to build pipelines on our land, we want to make the pipe manufactured here.”