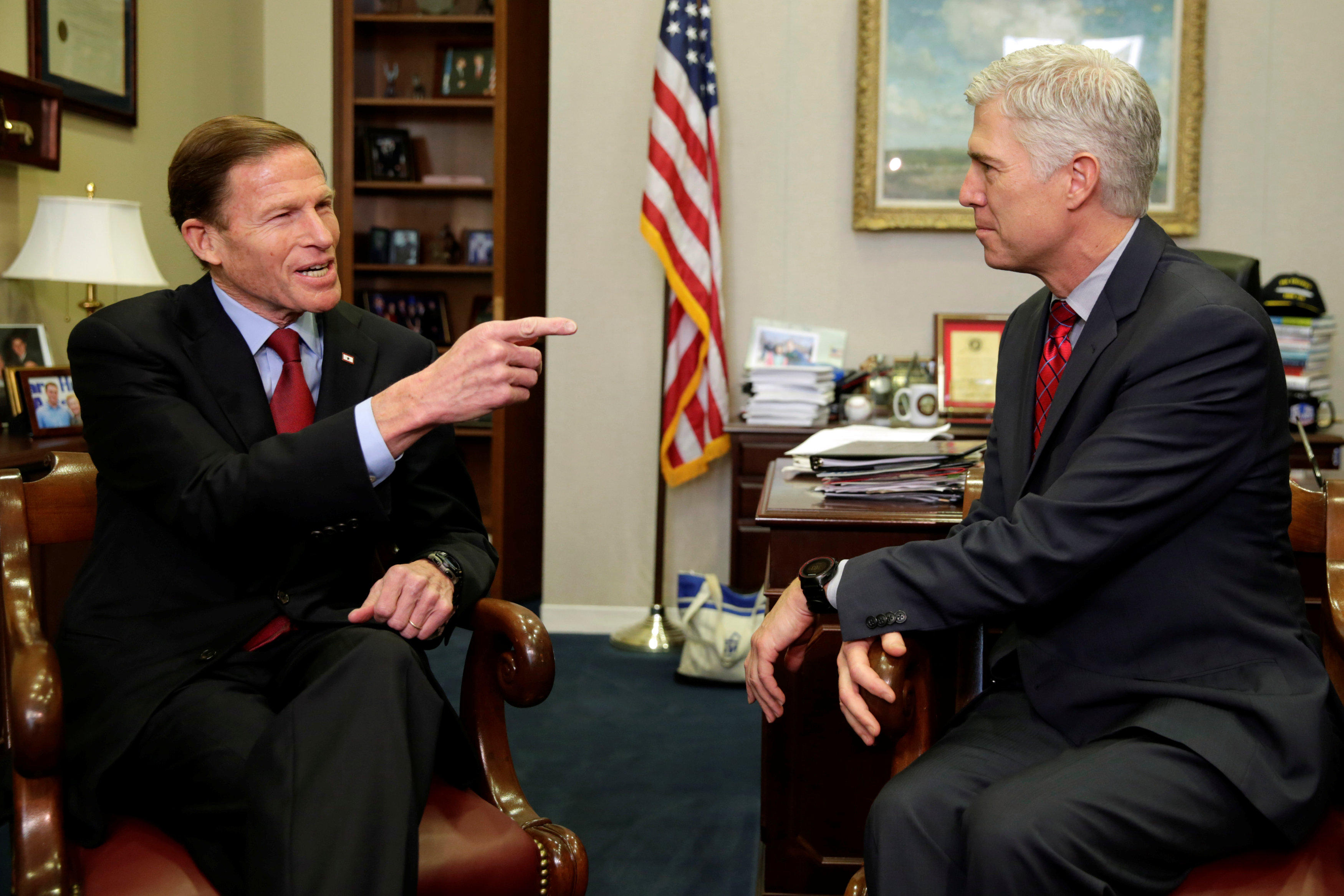 About one hour later, the president followed that up with a swipe at CNN’s Chris Cuomo, who he suggested was a “FAKE NEWS” journalist for failing to question Blumenthal on his military record:

Cuomo was quick to fact-check the president, however.

The CNN journalist responded with a tweet of his own Thursday, saying that “it was my first point to the senator - about his having misrepresented military career.”

Late Wednesday night, Blumenthal told CNN that the conservative judge, nominated to the Supreme Court bench by Mr. Trump last month, had said in a meeting that he found the president’s public admonishments of the courts to be disheartening and “demoralizing.” In a separate interview with MSNBC on Thursday, Blumenthal said Gorsuch had specifically told him to “feel free” to mention such remarks. (CBS News’ Margaret Brennan also confirmed from a source on the Supreme Court nomination team that Gorsuch had agreed with the senator that the remarks were disheartening. According to Brennan, the judge also added that Mr. Trump’s words were “demoralizing.”)

Sen. Ben Sasse, R-Nebraska, also seemed to back up Blumenthal’s characterization of his conversation with Gorsuch in an interview wtih MSNBC early Thursday. The Nebraska Republican said that in his own talk with the conservative judge, Gorsuch had said that any attack on any “brothers or sisters of the robe” is an attack on all judges.

Sen. Claire McCaskill, D-Missouri, also told reporters that Gorsuch seemed to believe it was “inappropriate” to question the political motives of the courts.

“I’m not going to go into details about what he said,” she said Thursday, “but there was no question he felt very strongly that it was inappropriate for people to question the independence and integrity of the judiciary.”

The first statements by Blumenthal, who sits on the Senate Judiciary Committee, came less than a day after the president slammed the courts as too “political” during an address to sheriffs and police chiefs in Washington, D.C.

“I never want to call a court biased, so I won’t call it biased,” Mr. Trump had told the room of law enforcement officials, following a series of legal challenges posed to his travel ban. But he added, that “courts seem to be so political, and it would be so great for our justice system if they would be able to read a statement and do what’s right.”

Over the last week, the president has also repeatedly berated a federal judge for his decision to suspend Mr. Trump’s immigration executive order, which halts the U.S. refugee program and prohibits citizens of seven Muslim-majority nations from entering the country.

After U.S. District Judge James Robart declared a nationwide stay on the ban, the president tweeted about the “so-called judge” and even suggested that a future terrorist attack on the country could be blamed on Robart and the court system.

As for Blumenthal’s military service, Mr. Trump -- who himself received five draft deferments during the Vietnam War (four times because he was in college and once because of bone spurs in his feet) -- is correct that the former senator did not fight in that conflict. Blumenthal -- who also obtained at least five draft deferments, according to a New York Times report -- joined the Marine Corps Reserves in 1970 and served for six years in the U.S.

Blumenthal has apologized for his exaggerations of his military service, according to a Washington Post report.

“On a few occasions I have misspoken about my service, and I regret that and I take full responsibility,” Blumenthal said at a news conference in Connecticut in 2010. “But I will not allow anyone to take a few misplaced words and impugn my record of service to our country.”