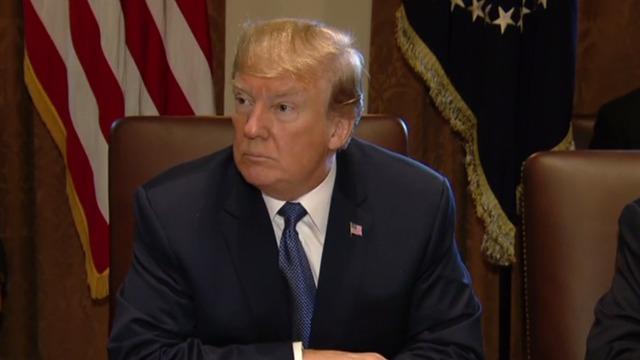 President Trump promised he would fill the military prison at Guantanamo Bay with "bad dudes" and slammed the Obama administration for prosecuting terrorists in U.S. courts. But so far, Trump has treated terror suspects just as President Barack Obama did, passing on Guantanamo in favor of having his own Justice Department lawyers try them in federal court.

The strongest sign yet that he is retreating from his earlier promise came Thursday, when Mr. Trump conceded that the civilian courts offer a swifter way to bring terror suspects to justice in the communities they attacked.

A day after he assailed the U.S. criminal justice system as a "joke" and a "laughingstock," Mr. Trump backed off his threat to send the suspect in Tuesday's New York bike path rampage to the troubled military commission system at Guantanamo.

"Statistically that process takes much longer than going through the federal system," Mr. Trump said in an early morning tweet, adding that there is "also something appropriate" about keeping him "in the home of the horrible crime he committed."

It was legally questionable whether the Trump administration could have sent 29-year-old Sayfullo Saipov to Guantanamo, in part because the courts have not ruled whether the 2001 Authorization for Use of Military Force — which permits the government to detain enemy combatants for the duration of a military conflict — applies to the Islamic State and its followers. And no one held within the U.S. has been sent to Guantanamo since the detention center opened in January 2002 to hold suspected members of al-Qaida and the Taliban.

Mr. Trump has passed on other chances to send suspects there, including earlier this week, when the Justice Department said a militant captured in Libya and accused of playing an instrumental role in the 2012 Benghazi attacks would be prosecuted in federal court in Washington, where a trial for the alleged mastermind is already under way.

On Wednesday, the U.S. announced that a man arrested in Bosnia had been brought to New York to face charges that he abandoned the United States in 2013 to join the Islamic State group. And the administration this summer sent an al-Qaida suspect linked to a plot to kill a Swedish cartoonist from Spain to Philadelphia to face terrorism charges in federal court, another break from Trump's tough-on-terror talk.

Attorney General Jeff Sessions, who has long argued that terror suspects should be prosecuted at the military prison, expressed confidence Thursday that the U.S. justice system can handle terror suspects like Saipov, an immigrant from Uzbekistan who authorities say was inspired by the Islamic State.

Sessions said the administration would "use all lawful tools at our disposal" in the fight against terror, leaving open the possibility of sending suspects to Guantanamo, but touting for the first time the hundreds of terrorism-related convictions the Justice Department has secured since the Sept. 11, 2001, attacks.

Mr. Trump's early record is a far cry from the rhetoric of his fellow Republicans who for years demanded terror suspects be held as enemy combatants.

Republican Sen. Lindsey Graham of South Carolina said Thursday he was "dumbfounded as to why the Trump administration still follows the Obama playbook when it comes to dealing with terror suspects." Republican Sen. John McCain of Arizona made a similar call for Saipov to be interrogated as an enemy combatant, without some of the protections afforded under the American legal system.

Mr. Trump's argument that Saipov should be tried in the same place where he committed his attack closely resembles the one Obama and former Attorney General Eric Holder made in trying to move the five men accused in the Sept. 11 attacks from Guantanamo to New York for trial in a civilian court. That effort that was derailed by political opposition. The men remain at Guantanamo and have yet to be tried. Their cases are likely years from resolution.

Holder expressed vindication after Trump changed course Thursday, writing on Twitter: "Those who criticized my decision to try 9/11 plotters in federal system take note. I was right. 16 years-no justice. Use courts-not Gitmo."

Just seven men have been convicted at Guantanamo either by trial before military commission or through plea bargains, including four whose convictions were later overturned on appeal or invalidated.

Mary McCord, who oversaw the Justice Department's National Security Division before her departure in April, said she hoped Trump and Sessions were beginning to recognize the long and successful track record of federal terrorism prosecutors.

"It's a good sign that the president and the attorney general are listening to the advice of counterterrorism prosecutors, career professionals who have a lot to offer" when it comes making decisions about where to try such suspects.

But the Justice Department said only that such decisions are made on a case-by-case basis and wouldn't say whether the recent cases are a sign of any formal policy. It remains to be seen how the administration will handle a U.S. citizen picked up on the Syrian battlefield in September for allegedly fighting with Islamic State militants.

In at least a physical sense, there are no practical reasons why the U.S. couldn't hold someone at Guantanamo. The detention center, which reached a maximum population of about 680 in the summer of 2003, is now down to just 41.