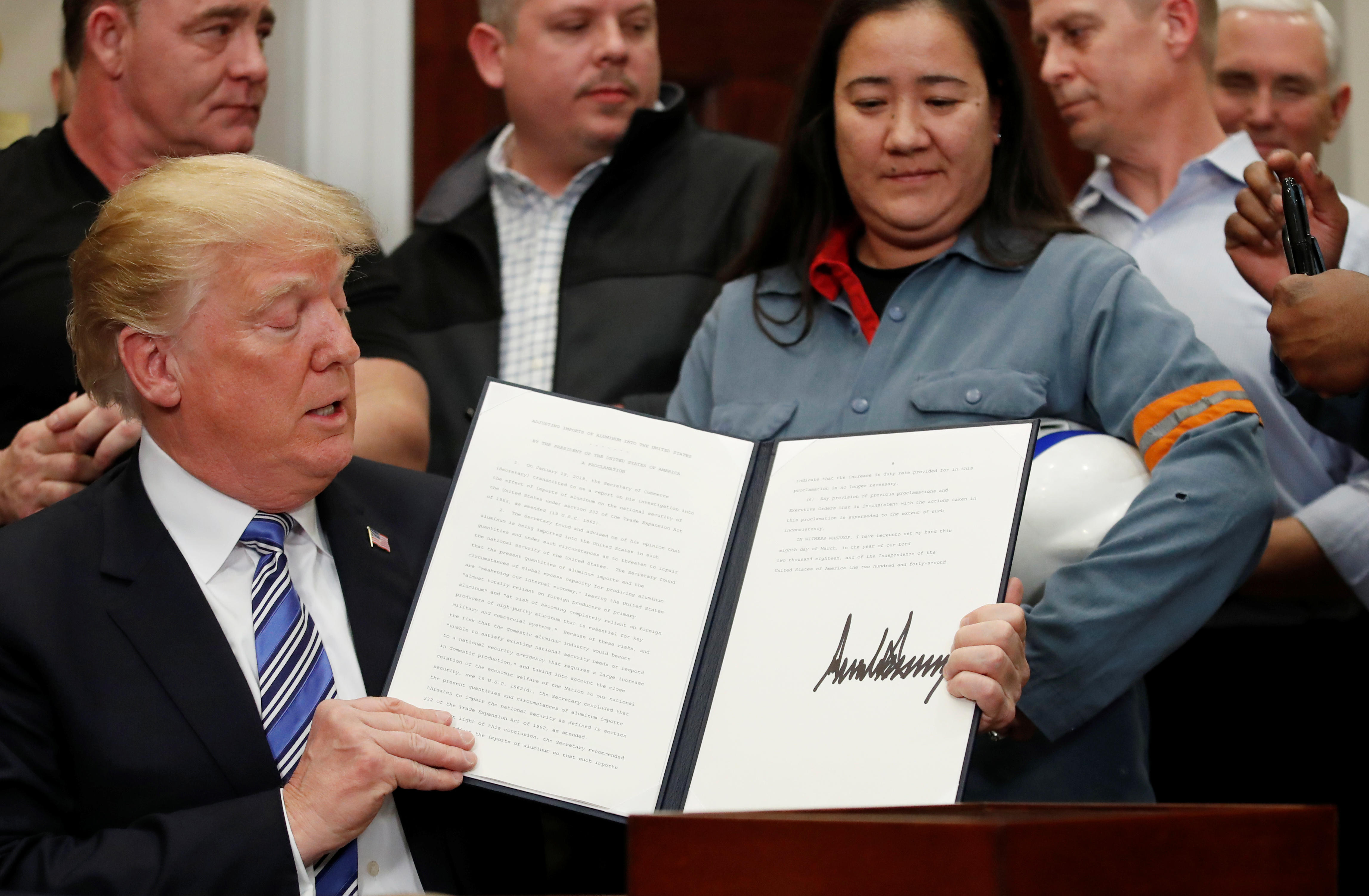 President Trump signed proclamations for new steel and aluminum tariffs at the White House Thursday afternoon, despite intense opposition from his own party. The tariffs -- 25 percent on steel imports and 10 percent on aluminum imports -- will go into effect 15 days from now. All countries with a security relationship with the U.S. will be invited to attempt to negotiate individual exclusions from the tariffs.

"It's really an assault on our country. It's been an assault," Mr. Trump said of what he deems steel dumping on American soil, as he stood surrounded by aluminum and steel workers in the White House's Roosevelt Room.

In a meeting with his Cabinet earlier Thursday, the president said he reserves the right to change the figures and add and drop countries at will.

Mr. Trump also suggested he wants to push "reciprocal" taxes with other nations.

"We're going to be doing a reciprocal tax program at some point," Mr. Trump said, mentioning India and China. "... It's a mirror tax. They charge us 50, we charge them 50."

The president said he wants to see a lot of steel coming into the country, but it needs to be "fair." The signing ceremony had some lighter moments. Mr. Trump told one worker present that his father was looking down on him proudly.

"Then he's even more proud of you," Mr. Trump rejoined.

The president has long called for fairer trade deals, and argues that the tariffs are necessary to safeguard the nation's struggling steel and aluminum against less expensive foreign imports. But the president's own party isn't on board. Republicans made a full-court press over the past 24 hours to try to change the president's mind on this issue, CBS News' Nancy Cordes reports.

On Thursday, Sen. Jeff Flake, R-Arizona, said he will introduce legislation to nullify anything the president issues on tariffs.

Sen. Orrin Hatch, R-Utah, who chairs the Senate Finance Committee, spoke to Mr. Trump. So did House Ways and Means Chairman Kevin Brady, R-Texas, who has been the GOP's point person on this issue in the House. Brady was trying to come up with an alternative plan the president could support; clearly, he was unsuccessful.

On Wednesday, more than 100 Republicans signed a letter to Mr. Trump, imploring him to hold off on the tariffs. Republicans are concerned the imports could offset the benefits of the tax overhaul they worked to hard to pass last year. The president's top economic adviser, Gary Cohn, announced his impending resignation shortly after Mr. Trump announced the tariffs.

The fact that the White House did agree to exempt Canada and Mexico from these tariffs – at least temporarily -- is not all that comforting to Republicans. They still worry about how other major U.S. allies all around the world will react.

Republicans are especially frustrated because the White House has continued to keep them completely in the dark. In fact, as recently as 1 p.m. Thursday, trade staffers in key congressional offices still had not been briefed on the White House tariff plan.