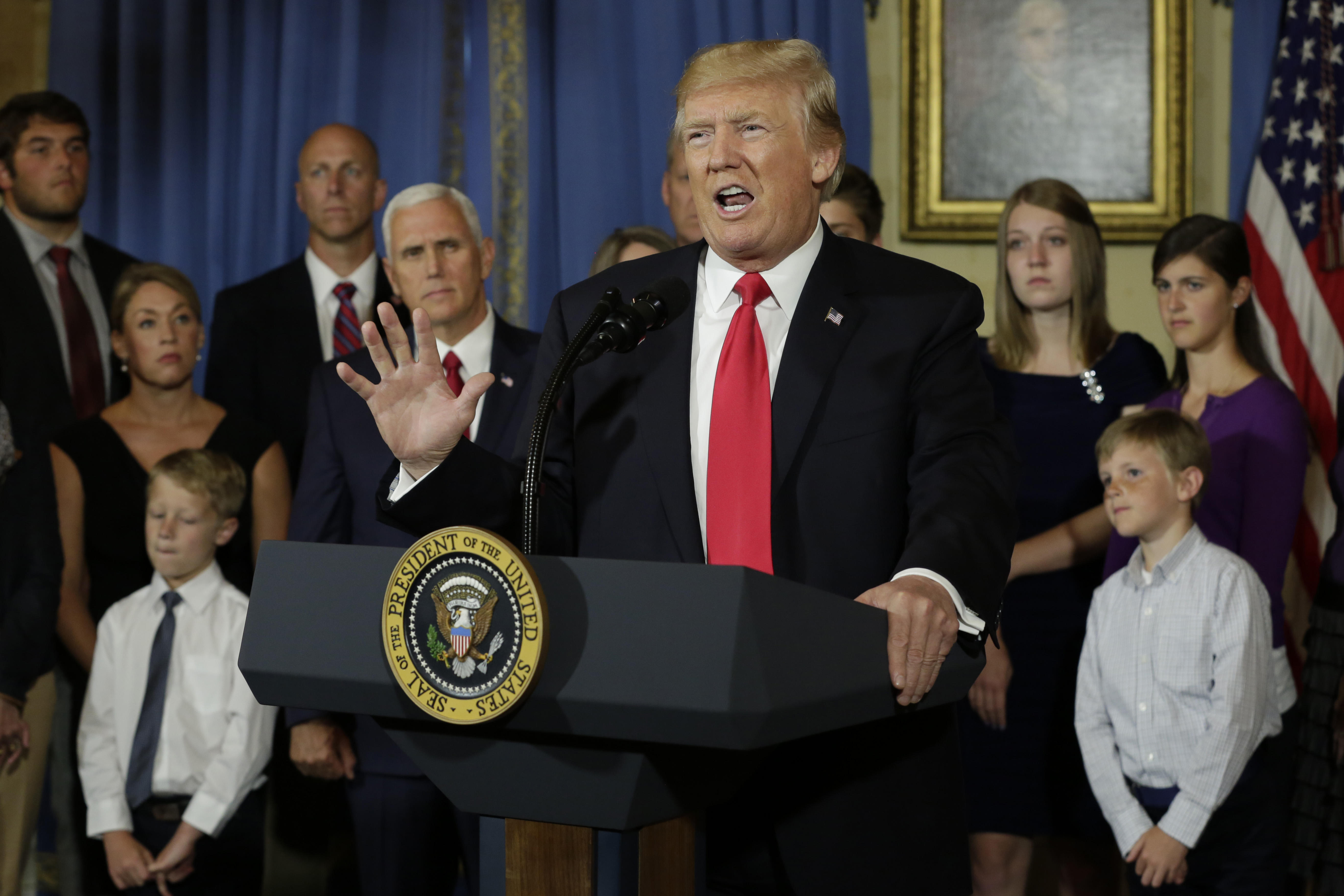 President Trump again admonished Republican senators before their Tuesday vote to repeal the Affordable Care Act. "now is the time to keep your promise."

"For last seven years Republicans have been united in standing up for Obamacare's victims. They kept saying it over and over again, every Republican running for office promised immediate relief," said Mr. Trump in his White House remarks on Monday.

"So far, Senate Republicans have not done their job in ending the Obamacare nightmare."

He added, "We, as a party, must fulfill that promise to repeal and replace, what they've been saying for the past 7 years."

Mr. Trump's comments in the White House Blue Room, surrounded by families who described themselves as "victims of Obamacare," echoed his Monday morning tweets, threatening members of his own party with "repercussions" that would be "far greater than any of them understand," should they fail to act to repeal Obamacare.

In his last-ditch effort to deliver on health care reform, Mr. Trump continued to place blame on Senate Democrats for being "obstructionists" adding that they have been "no help" to the health care debate.

"For Democrats, this vote is a chance to make up for their terrible harm they've inflicted on Americans," Mr. Trump added.

Though Senate Majority Leader Mitch McConnell has pushed for a motion to proceed on the Senate bill, Republicans have not given a clear indication of what exactly they'll be voting on.

The vote also appears likely to proceed without one of the Senate's key Republicans, Sen. John McCain of Arizona, who is currently recuperating after surgery for an aggressive form of brain cancer.

Live blog from event is below:

Trump to GOP: There's "still time to do the right thing"

"The American people have waited long enough, there's been enough talk and no action, now is the time for action," he added.

"The question for every senator now is whether they will side with Obamacare's architects, or with its forgotten victims," Mr. Trump said.

Mr. Trump warned that "any Senator who votes against starting debate on health care" is saying "that you are fine with the Obamacare nightmare."

He added, "for Democrats this vote is a chance to make up for "their terrible harm they've inflicted on Americans."

"For last seven years Republicans have been united in standing up for Obamacare's victims. They kept saying it over and over again, every Republican running for office promised immediate relief," says Mr. Trump. He adds, "We, as a party, must fulfill that promise to repeal and replace, what they've been saying for the past 7 years."

"So far Senate Republicans have not done their job in ending the Obama nightmare," Mr. Trump warned. He adds that there has also been "no help" from Democrats and instead are being "obstructionists."

Trump says "Obamacare's lies" have caused "nothing but pain"

Democrats want to "ignore the pain, suffering and tremendous amounts of money these lies have caused," the president said.

"Thanks to leadership of President Trump help is on the way," said Vice President Mike Pence.

He added, "Tomorrow the Senate will have the opportunity to begin debate on bill to repeal and replace Obamacare and as the president said this morning, after years of talking and campaigning on it, now is time for Republicans to act."

"America is counting on the Senate to act," he notes.

Families file in for Trump remarks

Health and Human Services Secretary Tom Price along with CMS Director Seema Verma joined families and patients who have been impacted by the ACA.

"We're committed to delivering a health care plan that works for them," Price said.

President Trump and Vice President Mike Pence are expected to arrive shortly as Mr. Trump is set to give remarks regarding Senate Republicans' health care plan. Earlier, Mr. Trump greeted supporters at the White House who described themselves as "victims" of the Affordable Care Act.

When taking a photo with a group of White House interns, Mr. Trump shot down reporter's questions regarding health care reform by saying, "Be quiet."

"They're not supposed to do that, but they do it," Mr. Trump quipped to a group of laughing interns.