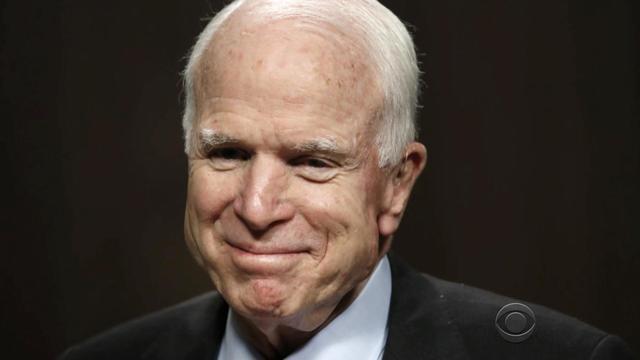 Sen. John McCain's daughter Meghan tweeted an update on her father's battle with brain cancer as the two enjoyed a hike while in Arizona on Saturday.

"Amazing hike with Dad this morning. Thank you all for your best wishes!" tweeted McCain, along with a photo of the two dressed in hiking gear, overlooking a lush landscape with a furry friend.

McCain stunned the political world last week when he was diagnosed with brain cancer while recovering from surgery to remove a blood clot above his eye. The next step in treatment is likely chemotherapy and radiation, the senator's doctor said.

McCain's diagnosis comes as the Senate is fighting over the future of health care legislation, with President Trump pushing the Senate to pass a bill before leaving for August recess. Senate Majority Leader Mitch McConnell on Wednesday said the Senate will vote on a motion to proceed with health care legislation next week. Sen. Lindsey Graham (R-South Carolina), one of McCain's good friends in the Senate, was uncertain whether McCain would return before August recess.

McCain vowed on Twitter Thursday that he would "be back soon."