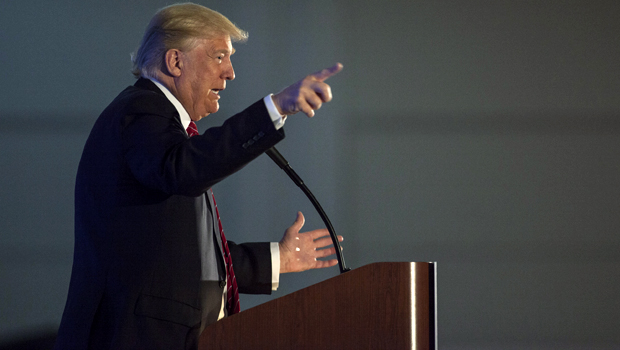 In the latest unsubstantiated claim from GOP front-runner Donald Trump, the business mogul is suggesting that Rafael Cruz, the father of Ted Cruz, was involved with Kennedy assassin Lee Harvey Oswald.

"You know, his father was with Lee Harvey Oswald prior to Oswald's being -- you know, shot," Trump told "Fox and Friends" Tuesday. "I mean, the whole thing is ridiculous. What is this?"

Trump continued: "Right prior to his being shot and nobody even brings it up. I mean, they don't even talk about that. That was reported and nobody talks about it."

The National Enquirer, a pro-Trump tabloid, said last week that it had conclusive evidence that Rafael Cruz is a man photographed next to Oswald in 1963, months before the assassination of President John F. Kennedy.

No other source corroborates the Enquirer's claim, but it uses a testimonial from the CEO of a digitizing photo service, Mitch Gladstone, who says the man in the photo has "more similarity than dissimilarity" to Cruz and that "...it looks to be the same person and I can say as much with a high degree of confidence."

The tabloid uses this photo from the Warren Commission, in which Oswald is shown passing out pamphlets in New Orleans with men who were not identified by the commission:

It wasn't clear whose death Trump was referring to -- Kennedy's or Oswald's. However, the photo in question in the Enquirer refers to Oswald months before the assassination.

"Trump is detached from reality, and his false, cheap, meaningless comments every day indicate his desperation to get attention and willingness to say anything to do so," said campaign spokesperson Catherine Frazier. "We are campaigning on jobs freedom and security while Trump campaigns on false tabloid garbage. And the media is willfully enabling him to cheapen the value of our democratic process."

Trump also blasted Rafael Cruz for invoking the "body of Christ" to convince pastors in Indiana to vote for his son.

But it's Trump who has said numerous times on the campaign trail and in interviews that churches should not lose their tax-exempt status for political participation.

"I know people who want to endorse me, but they're afraid to endorse anybody because they don't want to get political," Trump said in a February interview with the Christian Broadcast Network. "So essentially, they've taken a lot of the power away from the church."

"I see churches where they're afraid to be outspoken because they don't want to lose their tax-exempt status, and I realize that is one of the problems. I want to give power back to the church because the church has to have more power. Christianity is really being chopped; little by little it's being taken away."