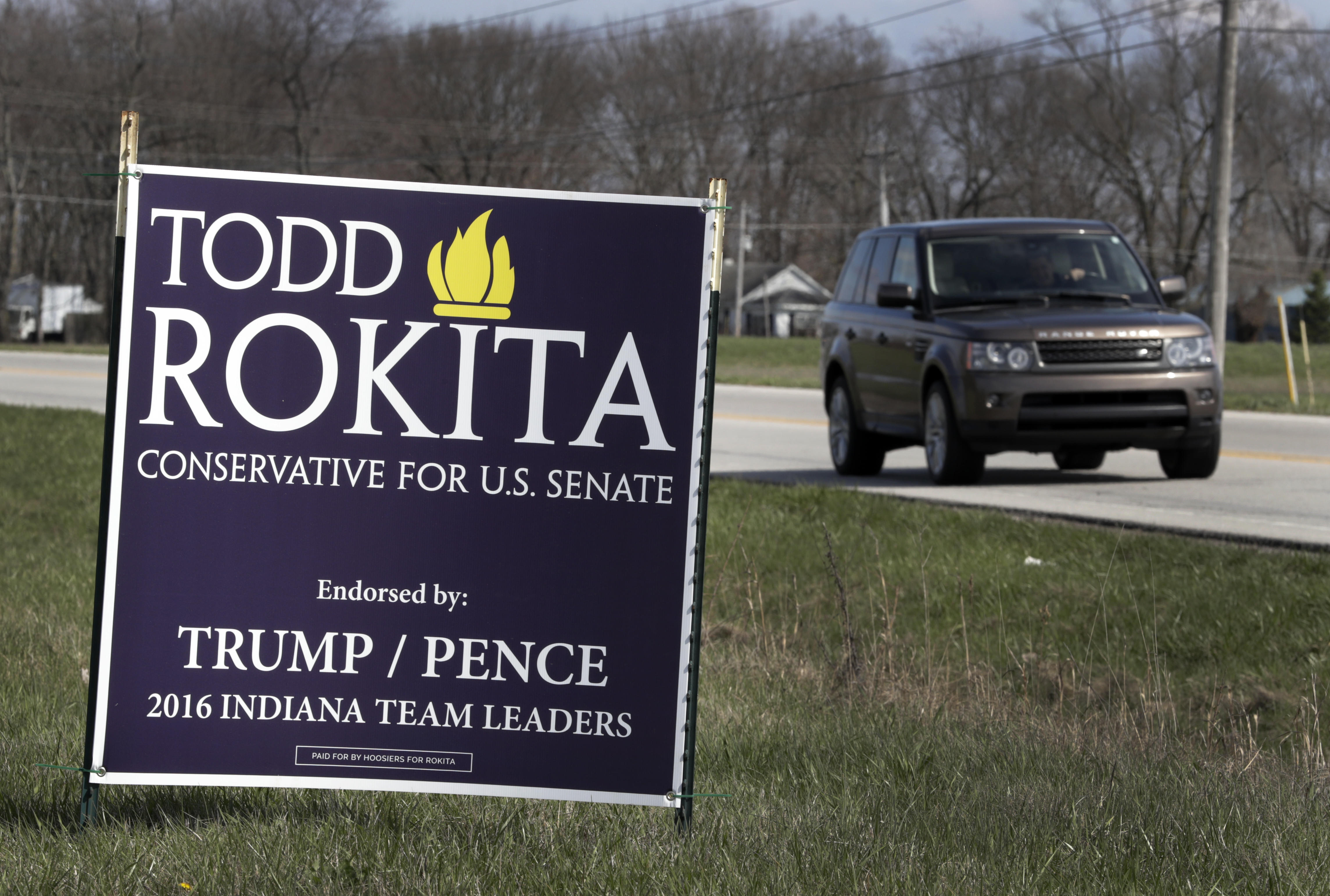 Donald Trump's re-election campaign has demanded that Rep. Todd Rokita take down yard signs it says give the false impression the president endorsed the Indiana Republican's Senate bid, two people with direct knowledge of the matter told The Associated Press.

The Rokita signs, which have gone up since that event, proclaim in large white letters "Endorsed by Trump/Pence," with smaller letters below adding "2016 Indiana Team Leaders."

Rokita spokesman Nathan Brand refused to say if the campaign will comply with the Trump campaign's request.

"We do not comment on yard sign strategy," Brand said in a statement that reiterated the endorsement by the two volunteers.

Tony Samuel, one of the volunteers who endorsed Rokita, told the AP that the Trump campaign texted him Monday night to voice displeasure over the signage.

Mr. Trump's re-election campaign is concerned the signs imply an endorsement that has not been made, a campaign official told the AP. The campaign also asked that Rokita's campaign certify in writing once the signs have been taken down, the other person with direct knowledge of the matter said.

Both spoke on condition of anonymity because they are not authorized to publicly discuss the matter.

John Pence, the vice president's nephew and deputy executive director of the Trump re-election campaign, declined to comment on the campaign's demand for Rokita to remove the signs.

The rebuke is a harsh blow for Rokita, who carries a cardboard cutout of Mr. Trump to campaign rallies, dons a "Make America Great Again" hat in TV ads and has ridiculed one opponent, fellow Rep. Luke Messer, for being a "Never Trumper."

Rokita and Messer are locked in a tight three-way race with former state Rep. Mike Braun that will determine who faces Sen. Joe Donnelly in November's general election.

The signage flap comes in the homestretch of a bitter GOP primary contest in which all three candidates have fallen over each other to portray themselves as Trump's staunchest supporter in Indiana, which holds its primary May 8.

The leaders of Mr. Trump's 2016 Indiana campaign, Samuel and Rex Early, noted when they endorsed Rokita that they were doing it as individuals.

"We are not speaking for the president or the White House," said Samuel, a veteran political operative and longtime Rokita friend.

But since then, Rokita has aggressively touted the endorsement at campaign appearances, during a recent debate and in his latest TV add titled simply "TRUMP."

Rokita, a lawyer who has been in elected office for 15 years, jumped into the race in August. He has sought to portray himself as a political outsider and the one true embodiment of the president's populist appeal. In separate TV ads, he calls for English to be made the official language of the U.S., drinks beer and fires a rifle that appears to be an AR-15.

But the AP reported earlier this month that he had harsh words for Mr. Trump in February 2016, when he called the eventual president "vulgar, if not profane" during a little-noticed interview with Indianapolis-based WXIN TV.

Rokita, at the time was a supporter of Sen. Marco Rubio in the Republican presidential primary.

"When you see Marco contrasted with Donald Trump — I mean someone who is vulgar, if not profane," Rokita said. "At some point you have to be presidential. People expect that and you see that in Marco Rubio."