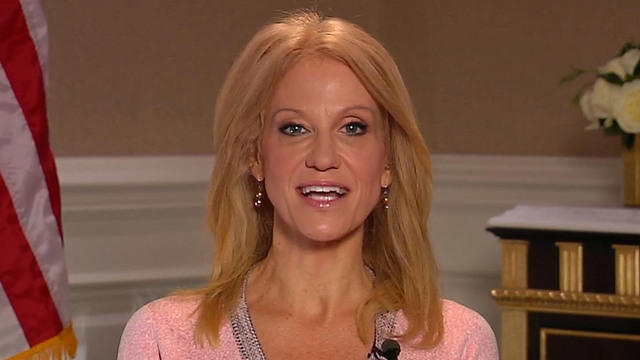 “I thought he acted like a bully,” Conway said in a “CBS This Morning” interview, adding that it “was very disappointing to hear the vice president of the United States suggest violence the old-fashioned way.”

“I think if Donald Trump said anything even remotely close to that we would’ve had our hair on fire for three days,” Conway added. “We would’ve had high school psychologists coming in and talking on air, we would have been talking about bullying and violence.

Last week, Biden reacted to Trump’s widely publicized 2005 “Access Hollywood” tape, where the GOP nominee could be heard making crude remarks about women and boasting about his aggressive and unwanted sexual advances.

“The press always ask me don’t I wish I were debating him?” Biden said. “No, I wish we were in high school. I could take him behind the gym — that’s what I wish.”

Trump himself, however, seemed to take up Biden’s challenge during a rally in Tallahassee, Florida Tuesday evening, saying he’d relish the opportunity to fight the vice president.

Conway added on Wednesday: “If I were Joe Biden, I wouldn’t.”

Conway, speaking from Trump’s Washington, D.C. hotel, also weighed in on questions about the campaign’s early ground game and defended its decision to attend the ribbon-cutting ceremony at the new Trump property.

When asked why the campaign was in D.C. instead of out on the trail in crucial battleground states, Conway said the hotel’s grand opening was just “a quick pit stop.”

“Mr. Trump has been in Florida for the last two and a half days with 12 different stops all across that state,” she said. “I won’t go through the whole schedule for you but obviously, the one thing nobody can say about Donald Trump is that he hasn’t been out there every single day talking to the voters directly.”

Conway also hit the current administration for rising health insurance premiums, a hot-button issue that the campaign has tried to tie to their opponent Hillary Clinton.

“We always want to take our message to women. You know, women are being told one thing on the air as to what this election is about and then they’re opening up their mailboxes and they’re getting whacked with these Obamacare premiums increasing,” she said. “These are the things that people are taking to the polls with them in Florida, in North Carolina, in other states.”

Discussing the early voting returns in Florida -- which show that of the ballots that have been turned in, 56 percent of them were by women, a demographic with whom Trump has had trouble historically -- Conway said the campaign wasn’t too worried.

“Actually the early voting returns that we get from the [Republican National Committee] overall in terms of the absentee ballot requests and the returns look very promising in a couple of these early states,” she said.

“The path will be much harder without Florida,” Conway admitted, before adding, “that’s why you’re going to see him, but we’re going to win Florida. So it’s not even part of the calculation.”

Asked whether the campaign was losing the early ground game, Conway said: “No, not everywhere.”

Conway went on to suggest Florida could turn out like North Carolina in 2012, when early voting returns weren’t strong for Mitt Romney, though the state ended up carrying the GOP nominee.

“There are 13 days left, most Americans are going to cast their votes on Election Day, and we know we’re going to win this election because enthusiasm, momentum, the movement in the polls,” she said.