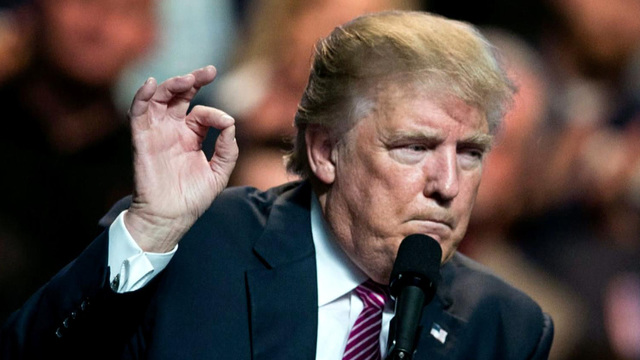 LOUISVILLE -- The message from the National Rifle Association was unmistakable: Putting Democratic frontrunner Hillary Clinton in the White House would be unacceptable to the group.

And with that, the NRA on Friday threw its weight behind the presumptive GOP nominee, Donald Trump, a one-time advocate for gun control who now wants to get rid of gun-free zones.

CEO Wayne LaPierre punctuated the endorsement with a dire warning, that if Clinton was elected, "you can kiss your guns goodbye!"

LaPierre's speech at the NRA convention here in Kentucky focused more on repudiating Clinton than it did touting Trump's conservative bonafides -- a message echoed by a statement from the chairman of the NRA's political arm, Chris Cox.

"If Hillary Clinton gets the opportunity to replace Antonin Scalia with an anti-gun Supreme Court justice, we will lose the individual right to keep a gun in the home for self-defense," Cox said in a statement. "Mrs. Clinton has said that the Supreme Court got it wrong on the Second Amendment. So the choice for gun owners in this election is clear. And that choice is Donald Trump."

For his part, Trump took the stage primed and ready to attack Clinton for her views on gun control, claiming she wanted to "abolish" the Second Amendment.

"Crooked Hillary Clinton is the most anti-gun, anti-Second Amendment candidate ever to run for office," Trump said.

Trump called for Clinton to mirror his actions and release her own list of prospective Supreme Court nominees.

"Let her put together a list," he said, "because I'd like to see what that lists consists of. And you will see, it's day and night, okay. Day and night. And it will not be good for the people in this room and it won't be good, by the way, for the people of our country, most importantly."

Trump has gone out of his way since launching his to take the mantle of being a protector of gun rights. Last summer, Trump released a position paper called "Second Amendment Rights" - his second of the campaign after immigration.

Trump's position on gun control, as detailed by the paper, was, in essence, that there shouldn't be any. The paper called for a national right to carry and said, "The government has no business dictating what types of firearms good, honest people are allowed to own."

As with many of Trump's positions, his thoughts of guns have evolved over time. In 2000, Trump bashed the NRA in his book, "The America We Deserve", and came out in support of a ban on assault weapons.

But the crowd at the NRA convention didn't seem to mind - interrupting his speech numerous times with standing ovations. Trump touted his sons' memberships in the NRA, saying to laughter, "They have so many rifles and so many guns. Sometimes I even get a little bit concerned. I say that's a lot."

As if heeding the NRA's endorsement message, Trump told the crowd, "The Second Amendment is on the ballot in November. The only way to save our Second Amendment is to vote for a person that you all know named Donald Trump. Okay? I will tell you. I will never let you down."