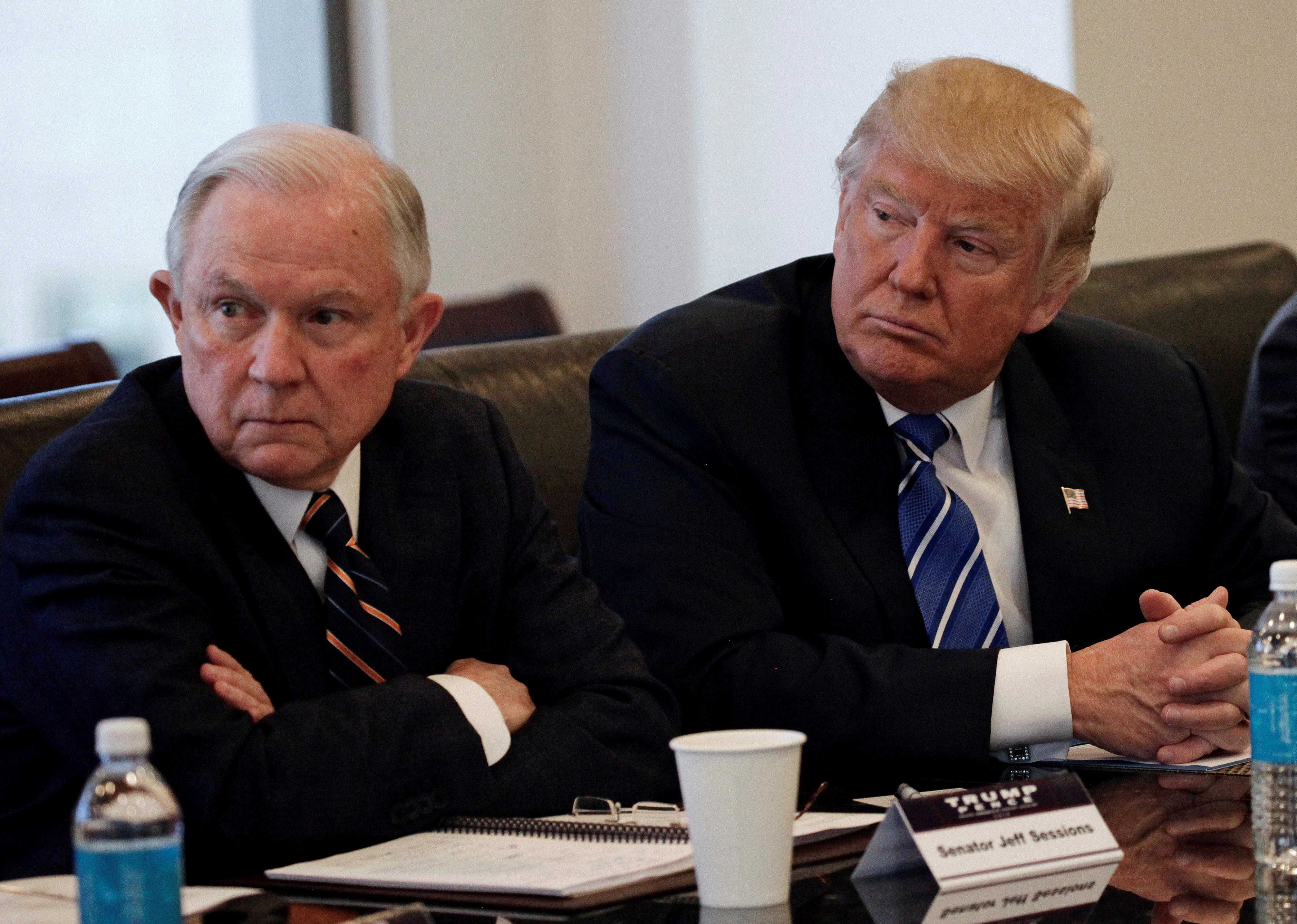 With President-elect Donald Trump’s inauguration just 11 days away, a spate of his top Cabinet nominees are about to undergo their confirmation hearings in the Senate this week.

Congress can’t officially confirm Mr. Trump’s nominees until after he’s sworn in, but they can hold hearings to help expedite the process and get nominations ready for Inauguration Day -- which is why this coming week has such a packed schedule of hearings.

Each nominee will first have a hearing with the Senate committee that has oversight responsibilities for his or her department. Once the committee holds a vote and approves the nominee, that candidate will be voted on by the full Senate.

Mr. Trump’s team has been criticized for the fact that five hearings are scheduled for Wednesday, the same day Mr. Trump is slated to hold his first news conference since his election. However, transition officials and congressional GOP leaders have said the packed schedule is the only way Mr. Trump will have Cabinet secretaries ready to go on day one of his administration.

The hearings will also begin amid concerns from Democrats that several of Mr. Trump’s nominees have not been fully vetted or have not completed their requisite paperwork. On Friday, the Office of Government Ethics expressed concern about the confirmation timeline in a letter to Democratic senators, saying that several of Mr. Trump’s nominees still have not been fully vetted. Democrats have called for more disclosure from the nominees, including tax returns.

Senate GOP leaders say the hearings will proceed as planned, and that all the nominees will receive the appropriate vetting in time for their hearings. Senate Majority Leader Mitch McConnell, for example, told CBS’ “Face the Nation” Sunday that Republicans’ goal is to have at least seven Cabinet picks confirmed on  the day Mr. Trump is sworn in -- the same number that President Obama had in 2009.

Here’s a cheat sheet from CBS News for when these confirmation hearings will take place and what to expect:

Sessions, a senator from Alabama, is the first of Mr. Trump’s nominees to get a hearing. He’ll go before the Senate Judiciary Committee at 9:30 a.m. on Tuesday and continue on Wednesday morning.

As the potential top law enforcement official in the country, he will be responsible for helping implement Mr. Trump’s immigration policy. Sessions is an immigration hard-liner, who subscribes to the same sort of “build a wall” philosophy that Mr. Trump does.

Sessions’ selection is not without controversy: when he was nominated for a federal judgeship in 1986, the GOP-controlled Senate rejected him amid allegations that he had made racist comments while serving as a U.S. attorney. A black assistant U.S. attorney accused Sessions of having addressed him as “boy,” and that he condemned the NAACP as “un-American” and “communist-inspired.” At the time, the late Sen. Edward Kennedy (D-Massachusetts) said of Sessions: It is inconceivable to me that a person of this attitude is qualified to be a U.S. attorney, let alone a U.S. federal judge.”

Kelly, a 46-year veteran of the U.S. Marines, is the second Cabinet pick who will get a hearing on Tuesday -- part of the Trump transition team’s stated goal of getting his core national security team in place by Inauguration Day.

Until earlier this year, Kelly served as the commander of U.S. Southern Command, which oversees American military operations in South America and Central America. He has commanded U.S. forces in Iraq as well as served as an aide to defense secretaries Leon Panetta and Robert Gates.

Kelly, who will go before the Senate Armed Services Committee, will likely get questions about his planned approach to combating ISIS and preventing terror attacks both at home and abroad.

On Wednesday, Tillerson will face questions from the Senate Foreign Relations Committee, which must approve his nomination before he receives a vote in the full Senate.

Tillerson, the CEO of ExxonMobil, has been Mr. Trump’s most controversial nominee thus far: his close dealings with Russia and Russian President Vladimir Putin have Democrats and Republicans alike asking whether he has any conflicts of interest in becoming the nation’s top diplomat. Tillerson and Putin met in the 1990s when Tillerson worked for Exxon in Russia; at Putin’s behest, the Kremlin conferred on Tillerson Russia’s Order of Friendship in 2013.

Two prominent Republican members of the Foreign Relations Committee -- Sen. Marco Rubio (R-Florida) and Rand Paul (R-Kentucky) -- have indicated that they find Tillerson’s ties to Russia concerning, though it’s unclear whether either would actually vote against Tillerson.

Democrats on the committee, too, are raising the Russia issue this week: Cory Booker (D-New Jersey) told CBS’ “Face the Nation” on Sunday that he wants to ensure Tillerson is able to truly represent the best interests of the U.S. in its dealings with Russia.

“This is an adversary that we want to know that he’s going to be able to represent the United States of America and our interests and not be compromised by his relationship,” Booker said.

Pompeo, first elected to the House in 2010, will appear in the front of the Senate Select Committee on Intelligence on Wednesday.

After graduating first in his class from West Point, Pompeo served in the U.S. Army for five years, studied at Harvard Law School and founded an aerospace company.

Pompeo does not have experience in espionage, but serves on the House Intelligence Committee and was also a member of the Select Committee on Benghazi. He was a harsh critic of former Secretary of State Hillary Clinton’s during the hearings on the deadly 2012 attacks in Benghazi, Libya.

Betsy DeVos, a prominent charter school advocate from Michigan, will appear before the Senate Health, Education, Labor and Pensions (HELP) Committee on Wednesday.

DeVos, currently the chairwoman of the American Federation for Children, a school choice advocacy group. Her critics have said her stated positions pose a threat to the country’s public school system.

She and her husband also head up the Dick and Betsy DeVos Family Foundation, which has supported projects like the West Michigan Aviation Academy, a public charter school in Grand Rapids and the Compass Film Academy, a Christian film school in Michigan. The billionaire DeVos family also owns the NBA team, the Orlando Magic. Dick DeVos’ father founded Amway.

Chao, who served as labor secretary under President George W. Bush, will answer questions from members of the Senate Committee on Commerce, Science and Transportation on Wednesday.

She is both the first Asian-American woman to ever hold a Cabinet-level position and the only member of Bush’s Cabinet to serve through his entire eight years in the White House (2001-09).

Before serving as labor secretary, Chao ran the United Way of America, was director of the Peace Corps and served as deputy treasury secretary under President George H.W. Bush. And she is also married to Senate Majority Leader Mitch McConnell (R-Kentucky).

Puzder is the CEO of CKE Restaurants, which owns fast food restaurants Carl’s Jr. and Hardee’s.

Among the topics likely to come up during his hearing is the question of the minimum wage: Puzder, who opposes dramatically raising the minimum wage, has argued that a higher minimum wage cuts profitability and forces businesses to shed jobs.

In addition, Puzder has publicly opposed several Labor Department regulations including the overtime rule, which requires employers to pay overtime for employees making less than a certain annual income.

A vocal critic of the Iran nuclear deal, Mattis’s views are aligned with those of Mr. Trump, who has suggested on the campaign trail that he will tear up the Iran deal.

However, Mattis takes a harder line on Russia than the president he would serve, having said that he considers Russia a major threat to the U.S., and he has said Russia wants to “break NATO apart.” Mattis also opposes waterboarding, a practice Mr. Trump has said he wants to bring back under his administration.

There’s a potential legal obstacle to Mattis’ confirmation: U.S. law prohibits members of the military from serving as defense secretary “within seven years after relief from active duty as a commissioned officer of a regular component of an armed force.” Mattis, who retired in 2013, is three years short -- so the Trump administration must seek a congressional waiver in order to get him confirmed.

Ross, 79, is the billionaire chairman of WL Ross & Co., an investment firm that specializes in corporate restructurings. He was supportive of Mr. Trump’s campaign and often appeared on business news shows to explain Mr. Trump’s positions.

Worth an estimated $2.9 billion, Ross built his fortune by buying and restructuring distressed industrial businesses, such as steelmaker LTV. Ross might be best known to voters as the owner of Sago Mine, a West Virginia coal mine where a dozen miners lost their lives in a 2006 explosion.

Ross will certainly get questions about his position on trade deals, since the Trump transition team has indicated that Mr. Trump will put Ross in charge of trade policy. Like Mr. Trump (and unlike most of the Republican Party), Ross favors withdrawing from or renegotiating free trade agreements.

Carson, who has never held elected office, is a former 2016 hopeful who dropped out of the race last March and endorsed Mr. Trump shortly thereafter. He’ll appear at a hearing in front of the Senate Committee on Banking, Housing and Urban Affairs.

The 65-year-old neurosurgeon, who has no previous policy experience in the field of urban development, speculated to Fox News before Thanksgiving that his upbringing was the reason Mr. Trump was interested in nominating him to the position.

“I grew up in the inner city and have spent a lot of time there, and have dealt with a lot of patients from that area and recognize that we cannot have a strong nation if we have weak inner cities,” he said.