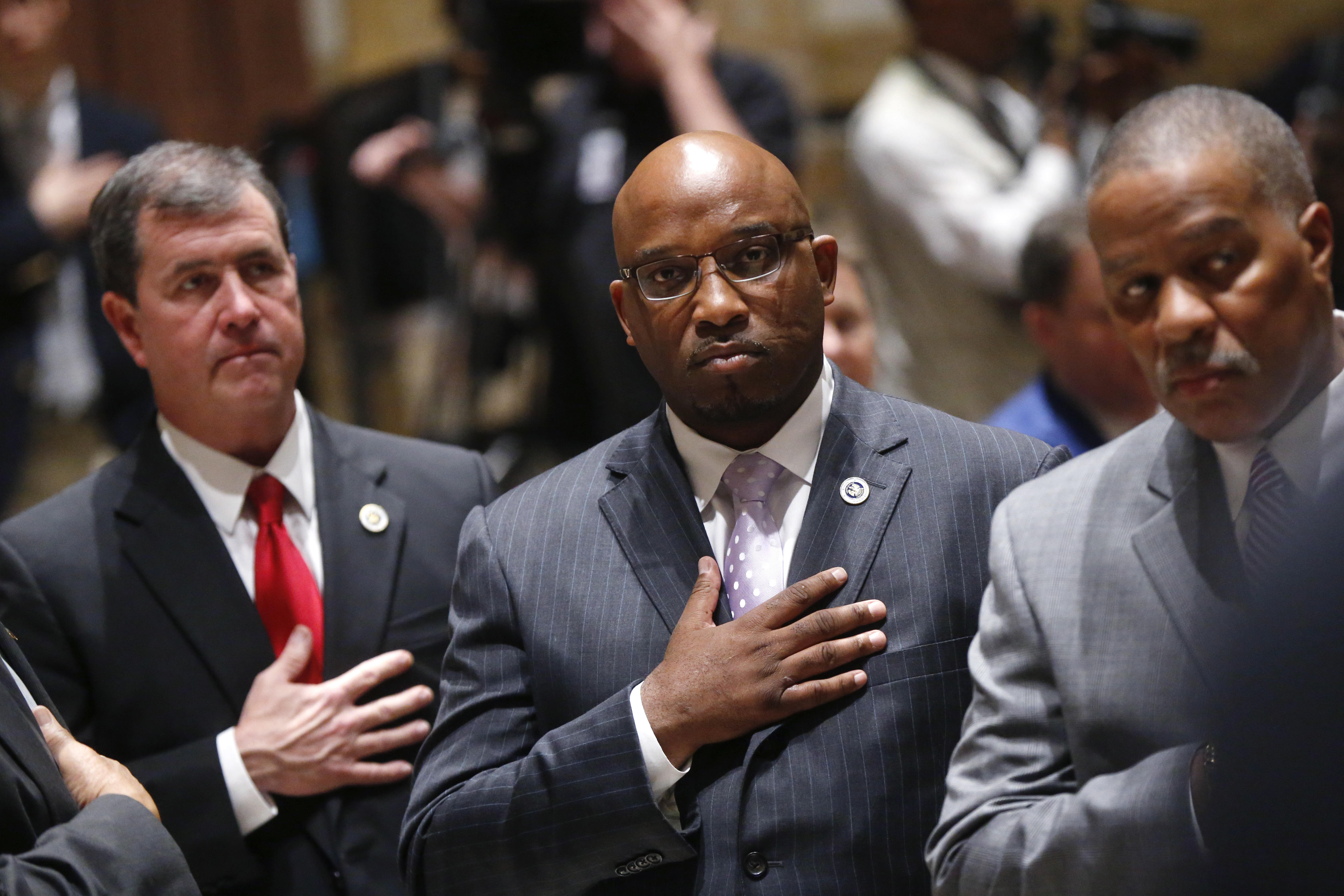 BATON ROUGE, La. -- A Louisiana state senator asked a court Wednesday to stall Senate efforts to remove him from office, even as his colleagues charged ahead with historic expulsion proceedings that stem from multiple domestic violence incidents.

Senators seeking to oust him say that conduct makes him unfit to be a senator, but Brown’s lawyer Jill Craft argues that he’s being denied the opportunity to properly defend himself and that senators’ disciplinary efforts go too far for misdemeanor crimes.

“It’s not a question of a misdemeanor. It is a question of beating women multiple times,” said Sen. Dan Claitor, R-Baton Rouge, sponsor of the expulsion effort.

Craft replied that no matter how “horrible” Brown’s conduct, “he like every other person in this state or this country has a right to due process.” She described the legislative proceedings as a “charade” and a “dog and pony show.”

Brown sought intervention from the district court in Baton Rouge, claiming in his petition that he hasn’t been given a “reasonable opportunity” to formulate his defense, review any evidence against him or prepare to call witnesses on his behalf.

Judge William Morvant denied Brown’s request for a temporary restraining order to block the Senate from moving ahead with expulsion proceedings. The judge scheduled a Feb. 23 hearing for Brown’s court petition, which also seeks a permanent injunction.

That will fall days after a Senate hearing on the expulsion legislation, set for Monday.

The Senate, gathering as a Committee on Discipline and Expulsion, held an initial hearing Wednesday, refusing nearly all requests for documents and subpoenas that Craft requested. Brown watched the hearing in the front of the chamber.

Craft sought emails and text messages in which senators That will fall days after a Senate hearing on the expulsion legislation, set for Monday.

The Senate, gathering as a Committee on Discipline and Expulsion, held an initial hearing Wednesday, refusing nearly all requests for documents and subpoenas that Craft requested. Brown watched the hearing in the front of the chamber.

Craft sought emails and text messages in which senators discussed Brown, including any polling done about a possible disciplinary vote. She asked for criminal records - anything from a misdemeanor traffic violation to a felony - for current and prior members of the Legislature for the last 10 years. She wanted the evidence and a list of witnesses planned for Monday’s hearing.

The requests were overwhelmingly voted down. Senators said Craft sought irrelevant documents. They said she was treating the proceedings like a civil trial, instead of a legislative hearing in which anyone can show up to testify and present information.

A key difficulty for Brown and his lawyer is that the senators are treating this as a hearing, not a court trial, CBS affiliate WAFB reports. “You all have absolutely no standards, there’s nothing in writing. There is nothing that says this is the minimum standard of conduct,” Craft said.

“The standard is what we determine as a body is what is unbecoming of a senator,” said Sen. JP Morrell, D-New Orleans.

The Senate is operating under disciplinary rules used once before, for the 1981 expulsion of then-Sen. Gaston Gerald, the only other time Senate leaders say they know of a senator being ousted. Gerald was convicted in federal court of extortion and was unable to attend legislative meetings because he was in a Texas prison.

Gerald was convicted of a felony charge. In his petition Wednesday, Brown says other state lawmakers have been convicted or pleaded guilty to misdemeanors but haven’t been subjected to possible punishment or expulsion.

“If they want to take domestic violence seriously, then make it a damn felony,” Craft said.

He has apologized and said he’s undergone anger management counseling.