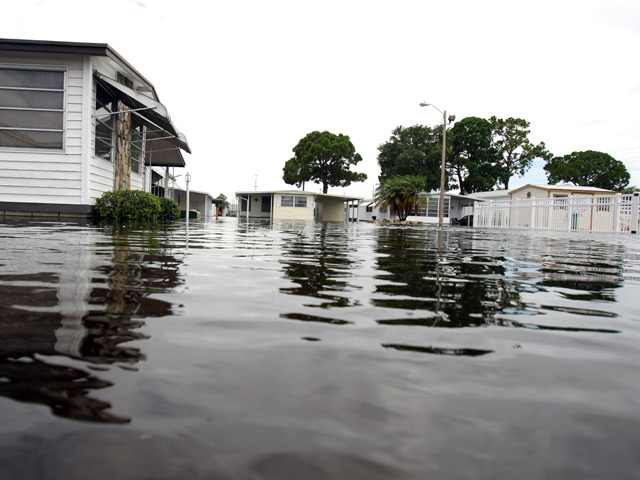 (CBS/AP) ST. GEORGE ISLAND, Fla. - Debby, the guest that wouldn't leave, is ruining things for a lot of other visitors.

Vacationers were wearing ponchos instead of swimsuits at the peak of the summer season because of the tropical storm, which has drenched Florida for at least four days straight like a giant shower head set up over the state's Gulf Coast. Debby has dumped as much as 26 inches of rain in some spots.

Disney World wasn't as crowded as usual, and one of its water parks closed because of the soggy, windy weather. Also, Sea World closed early on Monday.

Along the Florida Panhandle, where Debby sat offshore nearly motionless for days, the parking lot at the 100-room Buccaneer Inn was empty because of a power outage ahead of the usually big pre-July Fourth weekend.

"We've had bad luck on this island," said the inn's vice president, JoAnn Shiver. "We've had Dennis. We've had Katrina. We had the oil spill."

In a state where the biggest attractions are the sand and the sun, Debby forced many to make other plans.

Douglas and Carolyn Green of Nashville, Tenn., were supposed to spend a week on St. George Island with three generations of family, but arrived to find the electricity was out and the bridge closed to non-residents for fear of looters. They spent Monday night in nearby Apalachicola, and then all nine relatives headed to Fort Walton Beach.

"We never saw the island," said Douglas Green. "We're moving on. Plan B, I guess you'd call it."

Debby finally blew ashore Tuesday afternoon near Steinhatchee in the Big Bend area, the crook of Florida's elbow. It had sustained winds near 40 mph, barely a tropical storm. It is expected to cross the state and head into the Atlantic on Wednesday afternoon.

Several areas in northern Florida have received more than 10 inches of rain, and forecasters said southeastern Georgia could expect the same. Wakulla, an area in northwestern Florida known for camping and canoeing, has gotten more than 26 inches.

Earlier, without even making landfall, the system triggered at least 20 reports of tornadoes.

"All of a sudden, it gets very quiet, and I thought, 'Oh, the storm is over. ... Then I heard this explosion, and I heard this pow!" Cleo Robertson told "CBS This Morning."

The 73 year old watched anxiously as a possible twister closed in on her home in hard-hit Pasagrill Sunday.

It tore through her neighbor's home before jumping to hers - one of the oldest houses in the community.

"All the people ... came out of (an) apartment, six of them, scared to death. They had to be evacuated, because their roof was gone," Robertson said.

A woman was killed in a tornado spun off from the storm, and a man disappeared in the rough surf over the weekend in Alabama. In addition to knocking out power to about 35,000 customers, Debby has caused mostly scattered flooding, but forecasters warned it could get worse.

"Even though the winds are coming down, the rain threat continues," said James Franklin at the National Hurricane Center. "We expect another 4 to 8 inches, in some of these areas up in north Florida, in particular."

President Barack Obama called Florida Gov. Rick Scott and promised the state will have "no unmet needs" as it deals with the flooding, White House spokesman Jay Carney said.

In New Port Richey, a suburb about 30 miles north of Tampa, most of the 170-plus elevated homes at the Suncoast Gateway park for retirees had water underneath them. Several dozen homeowners decided to stay, despite having no electricity or tap water.

Some of those who left returned by kayak to collect their belongings.

Luisa Santoro decided to flee on Tuesday. Wearing rubber boots, she returned briefly to get her cat.

"My cat is atop the furniture," she said in Spanish, adding that her home was dry but that she feared a swollen retention pond nearby would rise further.

Portions of Interstate 10, the main east-west highway across northern Florida, were shut down because of flooding.

In Apalachicola, the hugely popular Boss Oyster restaurant was closed for the third day in a row after the rain overwhelmed the sewers and knocked out drinking water.

"We've taken a hit," said manager Matthew Bouzemann, adding that normally up to 800 customers a day would be coming in for the oysters.

In the Panama City Beach area, there was no exodus of tourists, said Jennifer Jenkins, executive director for the Gulf County tourism council. But it wasn't business as usual.

"I think most people went to the grocery store, maybe bought some board games and just decided to hang out till it's over," she said.

Florida Gov. Rick Scott declared a statewide emergency, allowing authorities to put laws against price-gouging into effect and override bureaucratic hurdles to deal with the storm.

A tropical storm warning remained in effect Tuesday morning for about 450 miles of coastline, from Mexico Beach in the Panhandle to Englewood, south of Sarasota.

Forecasters cautioned that Debby is a large tropical cyclone spreading strong winds and heavy rains at great distances from its center.

People in several sparsely populated counties near the crook of Florida's elbow were urged to leave low-lying neighborhoods because of the danger of flooding.

Residents waded in knee-deep water Monday as sinkholes popped up in other neighborhoods, a truck teetering over one gaping hole.

By the end of the week, Debby could dump more than two feet of rain on some coastal communities.

While the storm has helped ease Florida's drought conditions, most of those affected are ready to see Debby move on.

Some 30,000 customers had lost power due to Debby, and officials said they expect many more outages as Debby makes landfall.