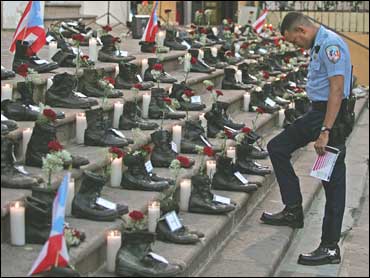 A call by Puerto Rico's governor for a U.S. withdrawal from Iraq earned a standing ovation from a conference of more than 4,000 National Guardsmen.

Gov. Anibal Acevedo Vila said Saturday that the U.S. administration has "no new strategy and no signs of success" and that prolonging the war would needlessly put guardsmen in harm's way.

"The war in Iraq has fractured the political will of the United States and the world," he said at the opening of the 129th National Guard Association general conference. "Clearly, a new war strategy is required and urgently."

Acevedo said sending more troops to Iraq would be a costly blunder.

"By increasing the number of National Guard and reserve troops, we put our soldiers in danger for the umpteenth time since the beginning of the global war on terrorism," said the governor, adding U.S. territories and states need Guard reserves in the event of natural disasters and domestic disturbances.

Acevedo, a Democrat, has called on Washington to withdraw troops from Iraq in the past, but has not been a vocal critic of the war.

"Maybe the (officers) were not expecting those kinds of comments, but having a dialogue is the point of conferences like these," Carrion said by phone.

About 1,800 Puerto Rican guardsmen are stationed overseas. It was not immediately clear how many were deployed in Iraq.

"The daily death toll of Americans and their allies has caused irreparable anguish here in Puerto Rico, and throughout the country. The same could be said for the people of Iraq," Acevedo said.