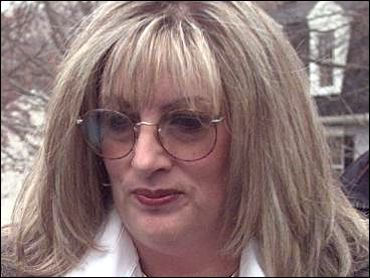 Linda Tripp will get more than $595,000 from the Defense Department to settle a lawsuit over the release of confidential personal information about her to a magazine, her lawyers said Monday.

Based on information supplied by Pentagon officials in 1998, The New Yorker reported Tripp did not admit an arrest on her security application for her job at the Defense Department. She had been arrested for grand larceny when she was a teenager.

Tripp, whose secret tapes of conversations with Monica Lewinsky helped lead to President Clinton's impeachment trial, sued the Defense Department two years ago, alleging violations of the Privacy Act. She had worked for the department as a public affairs specialist.

Tripp claimed administration officials retaliated for her role in triggering the impeachment proceedings. Tripp provided Independent Counsel Ken Starr with tape-recorded conversations in which Lewinsky confided an intimate relationship with the president.

"This government should never be permitted to use Privacy Act- protected information to discredit a political opponent," Tripp said in a statement.

The Justice and Defense departments declined to comment, and her lawyers did not disclose the total value of the agreement.

Stephen Kohn, one of Tripp's lawyers, declined to say whether Tripp is currently working, but said that under the settlement, she can reapply to any government branch.

Tripp lost her job at the Pentagon in January 2001 after she refused to resign like other political appointees on the last day of Clinton's term.

She earned nearly $100,000 a year when she was a public affairs specialist for the Defense Department. She held a civil service job in the White House under former President Bush before getting a political appointment and new job at the Pentagon in 1994.

U.S. District Judge Emmet Sullivan has yet to approve the agreement.

According to independent counsel Kenneth Starr's 1998 report outlining the Lewinsky probe, Tripp was one of 11 people in whom the former intern confided her relationship with the president.

However, Tripp was singled out in the report for having not only recorded the conversations, but taken detailed notes as well.

"The Tripp notes, which have been extensively corroborated, refer specifically to places, dates, and times of physical contacts between the president and Ms. Lewinsky," the report read.

At one point early in the Lewinsky scandal, Mr. Clinton expressed suspicions to Lewinsky about Tripp.

"(Mr. Clinton) was concerned about Linda, and I reassured him," Lewinsky testified. "He asked me if I trusted her, and I said yes."