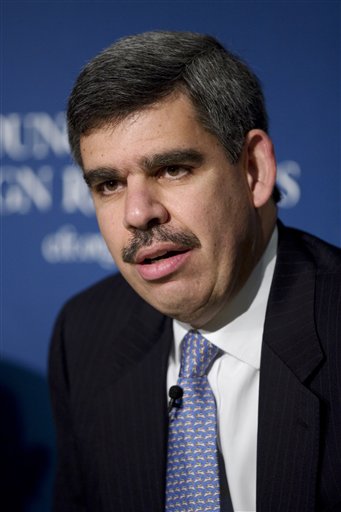 Could Treasury bonds, long considered the most rock solid of all
investments, be starting to show some cracks? In mid-March, the rating agency
Moody's said that the U.S. and a handful of other developed nations
are in danger of losing their AAA credit ratings — a move that could send
interest rates higher and make it more expensive for the U.S. government to
borrow. Is this how the long-feared "bond bubble" bursts? The
Moody's warning comes on the heels of a debt crisis in Greece, which
fueled concerns about credit bubbles throughout Europe and rocked markets
around the world.

For insights into the global debt market, CBS MoneyWatch
turned to href="http://moneywatch.bnet.com/economic-news/video/how-will-the-global-economic-crisis-shake-out/284829">Mohamed El-Erian, who
as co-chief investment officer and chief executive of bond powerhouse Pimco
manages more than $1 trillion in assets. El-Erian, one of the world’s
most influential investors, coined the phrase “the new normal”
to describe the post-recession outlook for slow growth in developed economies
and the gradual shift in wealth to the developing world. He is the author of href="http://www.amazon.com/When-Markets-Collide-Investment-Strategies/dp/0071592814">When
Markets Collide. El-Erian offered his view of global markets, the
inflation outlook, and the best places to put your money right now.

Why all the worry about U.S. Treasuries?

The rating agencies are looking closely at the sharp
increase in debt-to-GDP — which rose by a previously unthinkable 20
percentage points in under two years — and the outlook for persistently
high deficits. In the absence of timely fiscal actions and sustainable high
economic growth, debt in the U.S. could get to levels that are no longer
compatible with a triple A rating. A downgrade could increase borrowing costs
in the U.S., weaken growth prospects, and further undermine the country’s
role at the core of the international economic system.

Does this mean interest rates will go higher and investors will see the
value of their Treasuries fall?

We will see a tug-of-war in interest rates. The continuous
issuance of bonds to fund high deficits, as well as concerns in the rest of the
world about the stability of Treasury bonds, would argue for higher interest
rates and a steepening of the yield curve. At the same time, however, the
prospect of muted growth will put downward pressure on rates. The yield on the
benchmark 10-year U.S. Treasury bond will bounce around between 2.75 percent to
5 percent until the end of 2011.

It’s obvious why the world worries about U.S. bonds, but are debt
problems in tiny Greece important?

So far, the markets have dismissed Greece as too small and
isolated to matter.The same thing happened three years ago when the
inclination in the markets, and among policy makers, was to treat the href="http://moneywatch.bnet.com/investing/video/michael-lewis-change-for-wall-street/406289">sub-prime crisis as
being “contained” to a very small area of the housing
market. Yet, in our eyes, Greece is part of a broader phenomenon.

What’s happening in Greece, as well as in Dubai
last year, is part of a much bigger sovereign debt phenomenon that is going to
impact virtually every market in the world. Advanced countries have experienced
a huge and simultaneous shock to their public finances, because governments had
no choice but to step in to counter the implosion in housing, finance, and
consumer spending in 2008 and 2009. They aggressively used the public sector’s
balance sheet to minimize the disruptions.

How bad is the global debt problem?

One way to illustrate how dramatic the shock has already
been is to look at countries’ debt in relation to their GDP —
an important ratio because high debt levels can slow economic growth.

The percentage of countries with budget deficits that amount
to more than 10 percent of their GDP has been in the 0 to 5 percent range for
the past 30 years, according to Willem Buiter, chief economist at Citigroup.
Historically countries with higher deficits were in the emerging world. Today
the situation is very, very different. Countries with really high deficits
amount to over 40 percent of global GDP, and this number is dominated by
advanced economies, including the U.S. and U.K.

Remember, it’s not a question of whether countries
will adjust their ballooning balance sheets. They will. It’s
a question of when and how. And when they do, their actions will impact every
other sector in the economy. They can tax and cut spending. And, if things get
really bad, they can try to inflate themselves out of the problem or, at the
extreme, default.

What countries are you particularly worried about?

Pimco has done detailed debt sustainability analyses. We
look at traditional indicators, such as the debt burden and how much it costs
to service that debt given different economic growth rates. We also monitor
less traditional factors such as demographics and policy flexibility.

When you put it all together for advanced economies, Greece
is the most vulnerable country in Europe. Portugal is next, followed by Spain.
The least vulnerable country is Germany. The U.S. comes in the middle. It still
benefits from the fact that it supplies some key global public goods, including
the U.S. dollar as the world’s reserve currency. It also maintains
the deepest and most predictable financial markets.

What will the fallout be when governments do try to fix their balance
sheets?

Unfortunately, it is hard to see an adjustment process that
does not provide yet another headwind to growth. And remember, this comes when
there’s a prospect of increased regulation aimed at limiting the
impact of the type of market failures that played out in 2008 to 2009. This
will dampen the prospects for high returns for riskier assets, including
equities.

Putting all this together, what does the U.S. economy have in store for us
this year?

The first part will feel okay, and growth will look fine
because the markets will bounce back on the huge stimulus and the traditional
inventory cycle. Look for growth rates to be an annualized 4 percent to 5
percent in the first half of the year. Growth will likely slow in the second
half to an annualized 2 percent. Unfortunately, we will also have persistently
high unemployment. That’s very unusual in the United States, which
tends to have a flexible labor market.

What’s your outlook for inflation?

Inflation is the trickiest thing to predict, and most people
underestimate what inflation can do to their savings. In 2010, the output gap —
the difference between the actual output of an economy and its
output when it is operating at capacity — will be so large that
we should expect a gradual decline in inflation. But in 2011, the gap will
close from both sides, namely a slow recovery in demand along with a
destruction of supply.

To understand how it will work, look at the airline
industry, where these dynamics play out very fast. When demand falls, ticket
prices go down. Then planes get decommissioned and put in the desert. As a
result, you and I are stuck traveling in crowded planes, paying higher prices.

In 2011, investors will need to start thinking about
inflation protection.

Given that scenario, what advice do you have for U.S. investors?

Be careful of overloading on U.S.-based investments. You
want to be global when it comes to bonds as well as equities. For good
historical reasons, many investors put most of their money in the U.S. market,
but there are good opportunities outside of the U.S.

Your bond market allocation should reflect the fact that
this is not a plain-vanilla market. You need to take a Baskin and Robbins
kind of approach, with lots of different flavors. Within that, investors should
maintain exposure to high-quality debt, especially when it comes to corporate
bonds.

What areas of the bond market look most attractive?

The most interesting segments of the global bond markets
include local currency bonds in Brazil, select high-quality U.S. corporates,
emerging markets external bonds, several href="http://www.investopedia.com/articles/bonds/09/babs-are-born.asp">Build America Bonds, and
a handful of distressed credits that are priced well below their fundamental
value.

You are a big football fan. Who will win the Super Bowl in 2011?

Being a Jets fan for over 40 years, I have learned not to
expect too much in return for my steadfast loyalty. I combine continuous hope
with timid expectations given the years of disappointments. Having said
all that, I am excited about the Jets 2010 team!