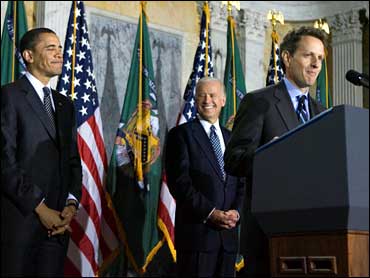 The new rules are designed to crack down on lobbyist influence over the rescue program and make sure that political clout in not a factor in awarding rescue money.

Obama administration officials said they go farther than the lobbying rules imposed by the Bush administration and are designed to ensure that bailout money is distributed with the goal of promoting the health and stability of the financial system.

"American taxpayers deserve to know that their money is spent in the most effective way to stabilize the financial system," Geithner said in a statement. "Today's actions reaffirm our commitment toward that goal."

Treasury's new rules restrict the contact officials can have with lobbyists in connection with applications for funds from the bailout program. The new restrictions are modeled on the limits that are imposed on political lobbying of Treasury Department officials on tax matters.

In making required reports to Congress on the operation of the $700 billion rescue program, officials will have to certify that each investment decision was based only on objective criteria and the facts of each case.

The rescue program will be required to publish a detailed description of the review process conducted in making the awards, and no bank will be considered for an award unless it was recommended for the assistance by the firm's primary regulator.

The new rules come in the wake of fresh lobbying reports filed with the government showing some big banks stepped up their lobbying efforts late last year even as they received billions of dollars from the bailout program.

The outgoing Bush administration committed the first $350 billion of the rescue fund in ways that left many lawmakers fuming about a lack of accountability and transparency in the program. While lawmakers failed in an effort to block release of the second $350 billion, the Obama administration said it would institute a number of reforms.

Along with the new lobbying rules, the administration has pledged to better track lending patterns by financial institutions to ensure that they are using the government assistance to increase lending. The Obama administration also has sought to limit executive compensation at institutions receiving government support and prevent shareholders at those companies from benefiting at taxpayers' expense.

Besides unveiling the new lobbying rules, Geithner scheduled a busy first full day as the nation's 75th treasury secretary. He was expected to meet with senior Treasury staff on initiatives to reform the current financial regulatory structure, something the administration has promised to address quickly in an effort to prevent another financial crisis.

The staff meetings also were scheduled to focus on efforts to overhaul the financial rescue program. The new administration has pledged to devote at least $50 billion of the second $350 billion toward helping people avoid losing their homes because of mortgage foreclosures.

Americans are losing both their homes and their jobs in alarming numbers. The recession is killing jobs at an alarming pace, with tens of thousands of new layoffs announced Monday by some of the biggest names in American business.

The job losses are now coming from every corner of the economy, reported CBS News correspondent Anthony Mason.

With the economy worsening, President Obama was making his first trip to Capitol Hill since his swearing-in last week for two private afternoon sessions Tuesday with House and Senate Republicans. The chief topic of discussion was expected to be Republican concerns over a proposed economic stimulus package.

"The goal is to seek their input. He wants to hear their ideas," White House press secretary Robert Gibbs said. "If there are good ideas - and I think he assumes there will be - we will look at those ideas."

"We're anxious to help him," the Kentucky Republican said of Mr. Obama Tuesday morning. "Frankly, the biggest problem is with his own party, the Democratic Party, which seems to be drifting away from what he said he wanted, which is a package that is at least 40 percent tax cuts and earmark free."

And House Republican leaders urged their rank and file to oppose the economic stimulus bill, delivering their appeal hours before President Mr. Obama heads to the Capitol to seek bipartisan support.

Shortly after Geithner won Senate confirmation Monday, Mr. Obama came to the Treasury Department to participate in a swearing-in ceremony and to project a sense of urgency on the part of the new administration in combatting the country's deepening economic troubles.

"We cannot lose a day, because every day the economic picture is darkening, here and across the globe," Mr. Obama told the audience assembled in Treasury's ornate Cash Room.

The Senate voted 60-34 to put Geithner in charge of the administration's economic team. Those who opposed the nomination said they could not accept Geithner's explanation that his failure to pay $34,023 in self-employment taxes from 2001 to 2004 when he worked at the International Monetary Fund was an unintentional error.

"Nominees for positions that do not oversee tax reporting and collection have been forced to withdraw their nomination for more minor offenses," said Sen. Mike Enzi, R-Wyo., noting that Geithner will oversee the Internal Revenue Service. "The fact that we're in a global economic crisis is not a reason to overlook these errors."

However, Geithner's supporters said he had paid the back taxes plus interest and that Mr. Obama deserved to have someone of Geithner's skills in financial crisis management leading the new administration's efforts.

Geithner, 47, served as undersecretary of the treasury for international affairs during the Clinton administration and was selected to be president of the New York Federal Reserve Bank six years ago. In that position, he has been a key player in the government's response to collapsing financial institutions and the housing and credit markets since last summer.