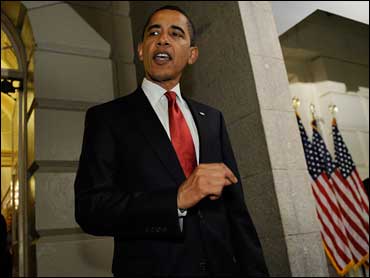 On the eve of a key vote, President Barack Obama privately promised Republican critics he stands ready to accept changes in $825 billion economic stimulus legislation, and urged lawmakers to "put politics aside" in the interest of creating badly needed jobs.

"The statistics every day underscore the urgency of the economic situation. The American people expect action," the president said in brief remarks between private meetings with House and Senate Republicans at the Capitol. "I don't expect 100 percent agreement from my Republican colleagues, but I do hope that we can all put politics aside and do the American people's business right now." (Click here for full text and video of Mr. Obama's remarks)

Following both meetings, Mr. Obama said he was "very grateful" to the Republican leaders for giving "me a chance to say my peace," reports CBS News producer John Nolen.

"What's the biggest obstacle to getting republican support for this bill? Well it's the spending pushed by liberal democrats in the house." House Minority Leader John Boehner said in an interview with told CBS News chief White House correspondent Chip Reid.

That spending includes $50 million for the National Endowment for the Arts, $335 million for educating teens about sexually transmitted diseases, and $200 million for sprucing up the national mall.

But Republicans also pushed for more tax cuts, telling the president that much of the spending will be too slow to make much difference.

Republicans who attended the sessions said the president did not agree to any specific changes but did pledge to have his aides consider some that GOP lawmakers raised dealing with additional tax relief for businesses.

Prodded to budge on another point, Obama said that despite Republican opposition, he will insist on giving relief to wage-earners who pay Social Security taxes but do not earn enough to owe income tax.

In a measure of the complicated political dynamic in Congress, one Republican quoted the president as saying any changes would have to come after the House gives what is expected to be largely party-line approval Wednesday to the Democratic-backed bill. The measure includes about $550 billion in spending and roughly $275 billion in tax cuts.

The Senate shows signs of greater bipartisanship, including a decision in the Finance Committee on Tuesday to add a new tax break for upper middle-income taxpayers, at a two-year cost of $70 billion. It was advanced by Sen. Chuck Grassley of Iowa, the panel's senior Republican.

Democratic leaders in both houses have promised to have legislation ready for Obama's signature by mid-February, and Tuesday's developments coincided with fresh evidence of deterioration in a national economy seemingly growing weaker by the day.

Housing prices tumbled by the sharpest annual rate on record in November, according to a closely watched private report released during the day, and a measure of consumer confidence dropped to a historic low.

The recession is killing jobs at an alarming pace, with tens of thousands of new layoffs announced Monday by some of the biggest names in American business - Pfizer, Caterpillar and Home Depot.

Looking ahead, economists predicted a net loss of at least 2 million jobs - possibly more - this year even if Mr. Obama's $825 billion package is enacted. Last year, the economy lost a net 2.6 million jobs, the most since 1945, though the labor force has grown significantly since then.

The job losses are now coming from every corner of the economy, reports CBS News correspondent Anthony Mason.

The unemployment rate, now at a 16-year high of 7.2 percent, could hit 10 percent or higher later this year or early next year, under some analysts' projections.

Separately Tuesday, the Treasury Department announced distribution of $386 million to 23 troubled banks, the first awards from the federal bailout fund since Obama took office a week ago.

Obama traveled to and from the Capitol in a snowy motorcade on Tuesday, far different from the inaugural parade seven days earlier. This was a business trip, marking his second reach across party lines in as many days in keeping with a pledge to seek bipartisan solutions to major problems.

On Monday, he leaned on House Democrats to jettison an item that would make it easier for states to provide family planning funds for the poor under Medicaid, a provision in the legislation that had become a target of ridicule for Republicans. White House Press Secretary Robert Gibbs said Obama supports the concept but wants it included in a different bill.

Ironically, Democrats said deleting the provision would wind up increasing federal spending, since it probably would mean more money spent on higher pregnancy and post-natal care.

House Republican leaders welcomed the president a few hours after urging their rank-and-file to oppose the stimulus bill, and it was far from clear that Obama had managed to pick up any GOP support during the day.

Gibbs said the White House expects some GOP lawmakers will vote for the measure on Wednesday in the House, and indicated he hopes there will be more in the Senate and even more later when a final compromise is reached.

One Republican senator, speaking on condition of anonymity, said the president pledged to Sen. John Ensign, R-Nev., to have aides review two specific proposals. One would affect businesses that pay down their debt. The other would provide a temporary tax holiday for companies that have money overseas and bring it back to the United States to invest.

Obama ventured into an uncertain political environment when he stepped into the Capitol, a president with high approval ratings pitching a plan that also has been favorably received in the polls.

Republicans, on the other hand, are trying to regroup after last fall's elections, in which they lost the White House as well as seats in both houses of Congress. While some conservatives seem eager to mount a frontal attack on Obama and his plans, others are pursuing a strategy of criticizing congressional Democrats rather than the president.

Hours earlier, according to officials who were present at a GOP meeting, none of the Republicans in attendance spoke up in disagreement when urged to oppose the legislation by their leaders. Rep. John Boehner of Ohio, the party's leader, and Eric Cantor of Virginia, the second in command, said they wanted "100 percent" opposition to the measure, which they argue includes billions in wasteful spending, these officials said.

Across the Capitol, Senate Republican leader Mitch McConnell suggested that Democrats in Congress were the problem, not the president.

"We think the country needs a stimulus," McConnell said on NBC's "Today" show. But he also said that he believes most people do not believe recovery can be accomplished through projects like "fixing up the Mall," a reference to funding to repair the National Mall in Washington.

He said Republicans want a bill that devotes 40 percent of its total to tax cuts.

Some conservatives were far more blunt.

"While the president was genial, his proposal remains rooted in a liberal, big-government ideology that ignores history," said Rep. Tom Price of Georgia, head of the conservative Republican Study Committee in the House.

Complicating the Republican position was evidence of support among the nation's governors for the legislation taking shape.

The measure includes more than $120 billion in aid to schools, some of it to protect them from the effects of state budget cuts in a time of recession. It also provides more than $80 billion additional funding for Medicaid, the state-federal program that provides health care for low-income people, and $40 billion more to help people who have recently lost their jobs hold onto employer-provided health care. Another $32 billion is ticketed for transportation projects, and $30 billion more for water projects and rail and mass transit.

Obama's centerpiece tax cut would provide $500 per worker and $1,000 per couple for low and middle-income wage earners.

While on the Senate side of the Capitol today, Mr. Obama paused while waiting for one of his handlers to direct him, and joked out loud, "I never know where I'm going anymore," Reid reports.

But Gibbs said the president will return to the hill as often as it takes to get this bill passed with bipartisan support - even if it turns him into a "walking comment box."