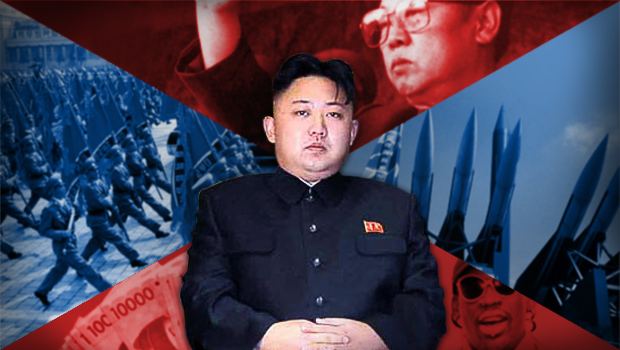 SEOUL, South Korea For years, B.R. Myers has immersed himself in the paranoid nationalist propaganda of North Korea, the world's most secretive nation. Parsing TV news reports, cartoons, movies, posters, school textbooks and novels, Myers has cracked the code of the xenophobic histrionics emanating from Pyongyang.

Where others see demented rants, cartoon dictators and a brainwashed nation of lemmings, the author of "The Cleanest Race: How North Koreans See Themselves - and Why it Matters," deconstructs how North Korea has come to see itself as "the better Korea," an oasis of purity and civilization under constant threat from barbarians, starting with the "Yankee colony" on its southern flank.

Conventional negotiating techniques and the usual incentives simply don't work with North Korea, he argues, because the country's sole mission is to preserve the ruling regime, at all costs. The nuclear-armed Kim dynasty has never been more vulnerable than right now, Myers says, adding that it's not cause for rejoicing, but for concern.

Below is an abridged interview that CBS News conducted with Myers in South Korea, where he lives and teaches at Dongseo University:

"It's really the same message as always, which is, the economy is improving but everybody needs to keep their eyes on the ultimate prize -- which is 'final victory.' And the regime defines final victory as unification under the North Korean flag. So even though we're seeing signs of economic reform there, and even a certain loosening of cultural and social standards in many ways, the country has not really budged from what has always been its main goal."

South Koreans are less interested in reunification these days, but the goal of a single Korea remains crucial to the North, why?

"North Korea not only wants unification, it absolutely has to have unification. That's really the only way this state can feel secure. We don't take enough notice of the fact that these two states have been locked in a kind of legitimacy struggle ever since the peninsula was divided. Each state has to prove that it is superior to the other, in order to maintain public support."

Despite wreaking economic havoc, the Kims have not only managed to survive, but thrive, how?

"Kim Jong-Il and Kim Il-Sung, I think they both saw this economic collapse coming on the horizon and so when Kim Jong-il took over, he lost no time in announcing that the country was under an unprecedented threat from the U.S. and that, therefore, as much as he would like to concern himself with economic matters, he had to focus all his time on strengthening the military, to defend the country against the Yankees. And this so-called 'military-first' policy was enormously successful in disassociating the regime from responsibility for the economic collapse and the famine. The people in North Korea blamed the United States for what had happened."

Why is the Kim dynasty more like a monarchy than a dictatorship?

"We should not make the mistake of assuming the Kim family is sitting up in some tower somewhere, ladling propaganda down to the passive people. There is a very strong consensus in North Korea that this is how the state should proceed. The state has done a very good job of equating itself with the race, with the nation. So even North Korean people who are not necessarily happy with economic policies are still loyal to the state itself. It's a military-first state, so whether it does very well on the economic front or not, is not central to public support for it."

Kim Il-Sung, the revered founder of North Korea, was certain the U.S. would never use nuclear weapons against his country, do North Koreans fear it today?

Why is North Korea determined to go nuclear?

"It means two things: On the domestic propaganda front, (it's) something people can be proud of... the more important reason (is) the main goal of final victory. North Korea knows that in a conventional war, it has no chance of beating the United States' and South Korea's combined forces. Therefore, it believes that by amassing nuclear strength, it would be in a better position to bully the South into submission. Not through outright violence, but through the increased threat of violence and force."

"This has emboldened North Korea to become more direct and forthright in its propaganda. Instead of saying, 'work with us, we can be friends,' they're saying outright, 'you work with us, or there's going to be problems. If you damage our pride, we're going to reduce Seoul to a sea of fire.'"

How did North Korea's founder launch such a lasting myth of North Korean greatness?

"Even refugees who have fled the country and lived here in South Korea for ten years -- they may be extremely critical of Kim Jong-Un and of his father -- but you won't hear anything bad about Kim Il-Sung, because the state was so successful in putting across the myth of Kim Il-Sung to the North Korean people. Here you had a guy who had spent the Pacific War in the Soviet Union, raising his Russian children, while the Japanese were tightening the screws on Korea, but because he had engaged in some partisan raids against the Japanese in the late 1930s, the personality cult was able to puff him up into this great anti-Japanese hero... And of course, times were much better under Kim Il-Sung, with all the money flowing in from the Soviet Union, from China. North Korea at that time was tapping even the most impoverished communist countries for aid - they were asking the Cubans for aid, for example. So North Koreans, even people who did not live through that time, have a collective memory of that time as one in which everything was perfect."

Why is it dangerous to dismiss North Korea as a failed state?

"Its entire legitimacy derives from the perception of strength and resolve. So that while it was easy enough for Krushchev to back down from the Cuban missile crisis, because the Soviet Union had other sources of legitimacy, North Korea really can't do that without admitting to its people that it's failed on the military front as well."

Is North Korean propaganda like a Madison Avenue ad campaign?

"Advertising works because it meets a psychological need, and the same can be said for propaganda... (North Koreans) have the same psychological need as you and I have, which is to give their lives some kind of significance that they feel will live on after their death... Some of us get that, in the West, from going to church, or amassing as much wealth as possible to give to our children. And in North Korea, they get that sense of purpose from believing that they all have a special part to play in this racial mission of routing the Yankees and unifying the peninsula. And it's an extremely appealing and unifying worldview. We shouldn't underestimate that."

North Koreans now have access to some information about the outside world, via South Korean popular media, and illicit cellphones - is this making the situation more volatile?

"The North Korean regime cannot explain to its people why the South Koreans do not want to be liberated by North Korea. And this is the cancer, so to speak, that is eating away at the North Korean state. But we should not be rubbing our hands in glee when we see this happening, because this is precisely what is making the regime behave so belligerently. It desperately needs to shore-up mass support and to keep people on track, and the only way to do that is by creating these (combat readiness) situations routinely."

Does North Korea want to bury the hatchet with the U.S.?

"Without the U.S., without that enemy figure, (North Korea) really has no reason to exist. (It) has no interest in normalizing relations with the U.S... I think recognition, in many ways, would take the wind out of their sails, because it would make it harder for them to claim the U.S. is responsible for the tension."

Why is North less a relic of the Cold War, than of the Pacific War?

"You're dealing with an implacably hostile enemy, a race-oriented hostile enemy, and that makes the situation much more similar to what we had in the Pacific War... of course I don't mean to equate North Korea with Nazi Germany or imperial Japan. North Korea is not an expansionist power. But the implacability of the hostility, I think that is an important commonality. We're not dealing with our grandparents' communists up there."