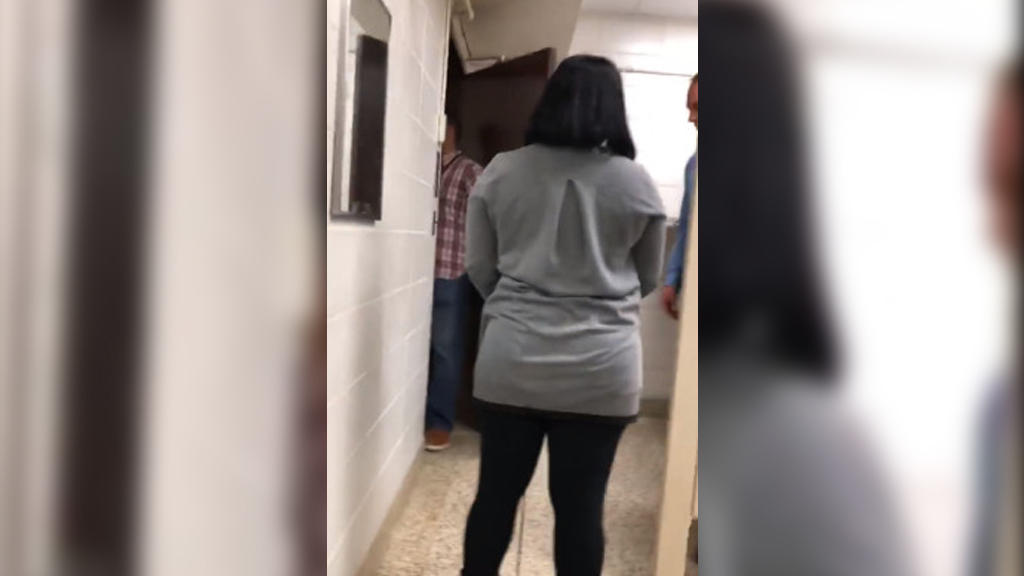 A transgender teen from Minnesota posted a video on Facebook showing school staff confronting her while she is in a stall of a high school bathroom.

The video shows the teen sitting on the toilet when a member of the Osseo Senior High School staff unhinges the lock of the bathroom stall using a long ruler. "I'm using the bathroom right now and they just violated me," the student says from the stall.

Several staff members can be seen standing in the girl's bathroom.

In another video, the teen confronts the staff members in the hallway, calling several of them out by name. "This is the dude that violated me," she said, pointing at a man in front of her.

In the Facebook caption, the teen said she was violated by the principal, administrators and hall monitors. She wrote that she cannot use the girl's bathroom because she is transgender and she wanted people to share the post to make it go viral. The videos have nearly 800,000 views combined.

However, Principal Michael Lehan said there is more to the story.

"I am aware of social media posts that significantly misrepresent an incident that occurred at school on Nov. 28. It's important for you to know that no students were barred or banned from using any bathroom at Osseo Senior High," Lehan said in a statement. "I sincerely wish I could say more, but for data privacy reasons, I cannot provide details about a situation involving a specific student."

The full statement was posed on the school district's website. It says staff only intervenes in the restrooms in limited situations, including when there's a concern about safety, health-related issues, or suspected illegal activity.

CBS Minnesota reports a spokesperson for Osseo Schools also released a statement regarding the videos. "Social media posts are significantly misrepresenting the incident and that staff works very hard every day to help ensure an inclusive school where all students feel welcome, respected and safe," the statement said. The spokesperson also said further details could not be shared due to "the student's right to data privacy."

Maple Grove Police Captain Adam Lindquist said the bathroom incident was handled by the school administration and staff. "Maple Grove Police Department have school resource officers in the school during school time hours. With this particular incident our School Resource Officer played a supportive role for the school staff as they do on a daily basis (was not actively involved in the incident)," Lindquist told CBS News in an emailed statement. "We support the Osseo School Districts statement and value our partnership with the students and staff."

"It is unfortunate, due to data privacy laws, that we will not be able to share more information involving the video posted on social media that does not accurately reflect the entire situation. The Osseo School District is handling media on this incident," Lindquist's statement read.