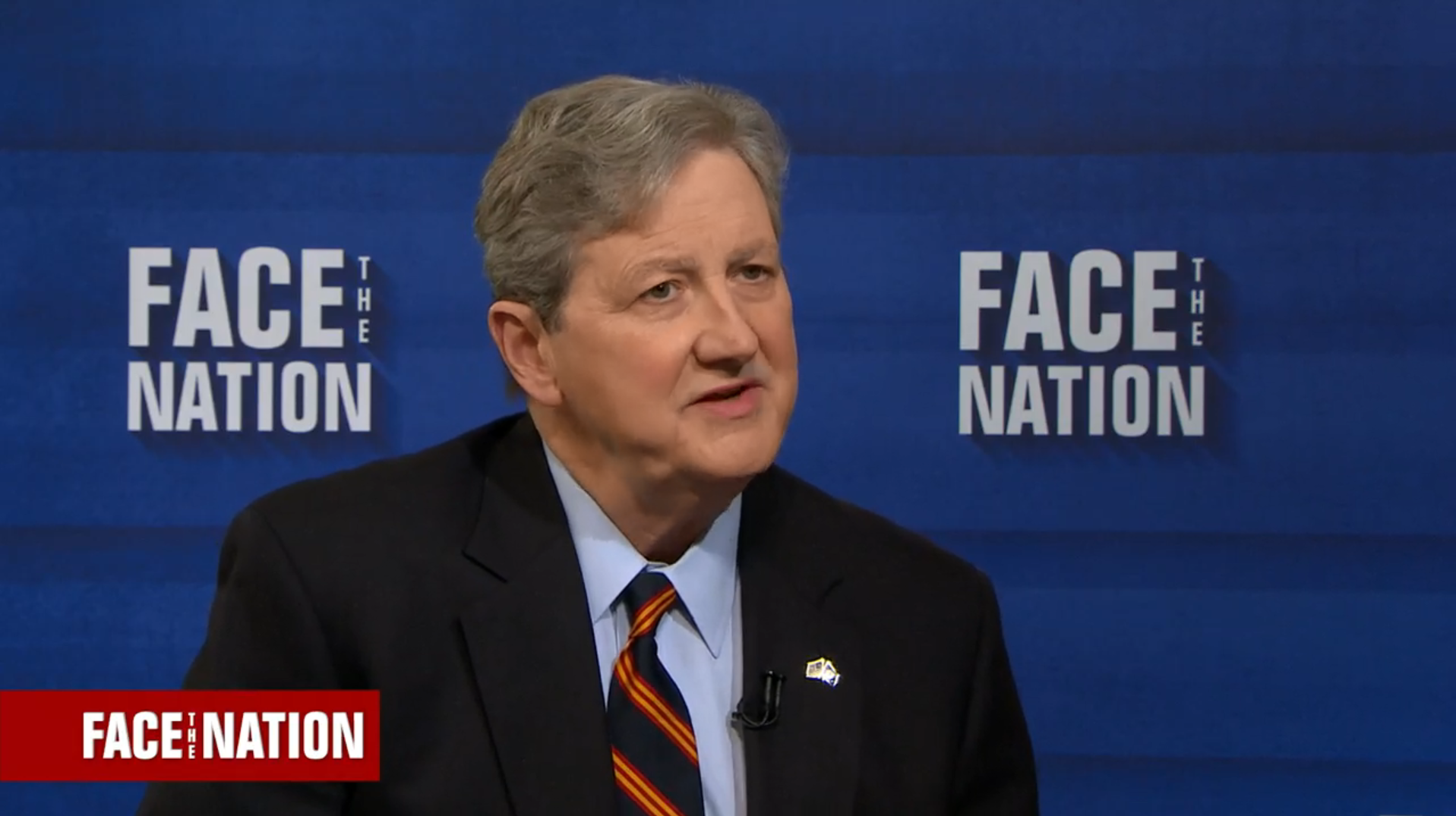 Sen. John Kennedy, Republican of Louisiana, is on the Senate Judiciary Committee and joined us to discuss Zuckerberg's testimony, potential regulation and more.

The following is a transcript of the interview with Kennedy that aired Sunday, April 8, 2018, on "Face the Nation."

MARGARET BRENNAN: We turn now to Republican Senator John Kennedy of Louisiana. He'll be one of those questioning Facebook CEO Mark Zuckerberg on Tuesday. Welcome to "Face the Nation," senator.

BRENNAN: Facebook has acknowledged that some of its search tools were used by malicious actors to obtain information and also that 87 million users had private information shared with other organizations without their consent. What do you need to hear from Mark Zuckerberg?

KENNEDY: I don't want to hurt Facebook. I don't want to regulate them half to death. But we have a problem. Our promised digital utopia has minefields in it. Mr. Zuckerberg has not exhausted himself being forthcoming. We had one hearing. Mr. Zuckerberg sent his lawyer. Very bright, very articulate. Could talk a dog off a meat wagon. But he didn't say anything. And my biggest worry in all of this -- and I have many, many questions, Mr. Zuckerberg -- but my biggest worry with all this is that the privacy issue and what I call, called the propagandist issue are both too big for Facebook to fix, and that's the frightening part.

BRENNAN: Too big for Facebook to fix. Does that mean that lawmakers like you need to seek regulations to fix it for them?

KENNEDY: It may be the case. I would rather do it with Facebook and the other social media platforms. Look, we've got to talk about the initial bargain. Is it, is it fair for me to give up all of my personal data to Facebook and apparently everybody else in the Western Hemisphere in exchange for me being able to see what some of my high school buddies had for dinner Saturday night? Who, who owns my data? Do I own it or does Facebook own it? The service agreement with Facebook. It's written in Swahili. Nobody understands it. Should I have the right to to opt in as opposed to opt out -- put the burden on Facebook? Should I have the right to erase my data? Should I have the right to demand that Facebook get my permission before it sells the data? We all know that poison is being spread on social media, not just Facebook. How are we going to stop it? And by the way while we're talking about that -- what's poison? First Amendment concerns.

KENNEDY:These are very deep issues and they're bigger--

BRENNAN: They absolutely are.

BRENNAN: They absolutely are. But some would say look is it really something that Facebook needs to police themselves or should Americans essentially have known better in that they're putting that private information out there?

KENNEDY: Facebook knows more about its business, its algorithms, its methodology, than any of us in Congress do. I'm hoping that Mr. Zuckerberg will come to the table and say, 'Okay here are the problems, here some suggested solutions, let's talk it through together.' But you know some people respond when they see the light. Others have to feel the heat and these issues are not going away. And let me say it again. I do not want to hurt Facebook. It's done a lot of good but how do we preserve the good things about Facebook while mitigating the obvious detrimental effects of it. It's, it is a minefield in many respects.

BRENNAN: Facebook already said ahead of this hearing that they're going to start disclosure, disclosing to its users whose information may have been they don't like the word breached but shared with others. And they're also talking about now requiring buyers of political ads to confirm their location and identity and display labels saying that these were paid for ads. What do you think of that kind of proactive action?

KENNEDY: I think it's a start. But the the first question that Mr. Zuckerberg needs to ask is does he really know who's running ads on his-- on his platform. He doesn't. Facebook's lawyers say they have 500,000 unique advertisers a month. I think that's probably wrong. It's probably much more. I don't think they know who is running ads and issue campaigns. We need to talk about how we're going to find out. And again you're going to get off quickly into First Amendment issues as well.

KENNEDY: I don't want Facebook to, to censor what I can see in all respects but I do want them to stop the fake news. I do want them to stop, stop people from running advertisements on Facebook that encourages the genocide of the Rohingya Muslims in Burma. These are, these are deep issues. They're not going to go away and we're not going to conclude this in one hearing, and I hope that Mr.- Mr. Zuckerberg will be forthcoming and frank.

BRENNAN: Forthcoming and frank, and if he's not what happens?

KENNEDY: Well, we can do it the easy way or the hard way. I do not want to regulate Facebook half to death but we do have two major problems we've discovered. One is the privacy issue and the other is the propagandist issue. Now Facebook needs to talk with us frankly about how we can fix that and if it doesn't know how to fix it, which is my biggest worry, it needs to be be very frank in that regard too.

BRENNAN: I want to also ask you about EPA Administrator Scott Pruitt. The president seems to have given him a pass in a tweet yesterday signaling that he's okay with some of these reports about government spending run amok and these other allegations of ethical violations. What do you think?

KENNEDY: Well Mr. Pruitt and other members of the president's cabinet, I would say ethics matter, impropriety matters, the appearance of impropriety matters. To the extent that you're, stop acting like a chucklehead, stop the unforced error, stop leading with your chin. If you don't need to fly first class don't. Don't turn on the siren on your SUV just to watch people move over, you represent the president of the United States. All of this behavior is juvenile, it's distracting from the business that we're trying to do for the American people.

BRENNAN: Should he keep his job?

KENNEDY: Well that's really up to the president. I know what I would do if I were Mr. Pruitt, I would call a press conference tomorrow and I would say "Okay let's talk about your criticisms of me."

BRENNAN: Well he did give some interviews last week--

KENNEDY: Yeah,  I would do a full blown press conference and say "Okay here are your criticisms. That's fair. I'm going to stop doing it. Here's what I think is not fair." But, but these people are hurting the president and I'm not saying he's not a good person. But--but the appearance of impropriety matters. And you can--you can--you can't put lipstick on a pig.

BRENNAN: For you though, the president-- the president and Scott Pruitt have alleged that all of this is just politically motivated by environmentalists who don't like his deregulation--

KENNEDY: Some of it is--but all of it isn't. I mean he either travels with 20 security folks or he doesn't. He either flies first class every single time or he doesn't. I don't know what the allegations about his apartment are true or not. They don't look good. Why do you want-- in his position--why do you want to rent an apartment from a lobbyist for God's sake? Stop leading with your chin. Now these are unforced errors. They are stupid. There are a lot of problems we can't solve. But you can behave. I'm not--I don't mean to denigrate Mr. Pruitt but doggone it he represents the president of the United States and it is hurting his boss and it needs to stop.

BRENNAN: Senator Kennedy, thank you for coming on "Face the Nation." We'll be back in a moment.