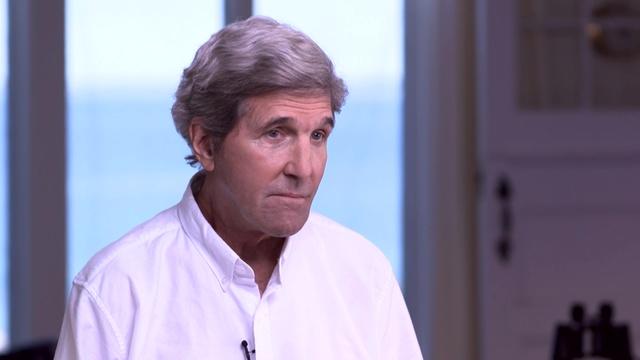 The following is a transcript of the interview with former Secretary of State John Kerry that aired Sunday, July 22, 2018, on "Face the Nation."

MARGARET BRENNAN: We traveled to Martha's Vineyard this week to talk with former Secretary of State John Kerry about his new book, "Every Day is Extra." We also took the opportunity to get his thoughts on President Trump's performance in Helsinki.

SECRETARY JOHN KERRY: I found it shocking. I found it to be one of the most disgraceful, remarkable moments of kowtowing to a foreign leader by an American president that anyone has ever witnessed. And it wasn't just that it was a kind of surrender. It's that it is dangerous. The president stood there and did not defend our country. He stood there and did not defend the truth, he did not defend the facts… and the danger, it's dangerous -- because it sends a message to President Putin and to the rest of the world that the President of the United States, the leader of the free world, really doesn't have a handle on what he's doing, and that he doesn't, you know, know either what the facts are or he won't accept the facts.

MARGARET BRENNAN: So you don't buy his walk back?

SECRETARY KERRY: I don't buy his walk back one second. And by the way, how can anyone buy walk back after walk back when you take positions here, and then you take positions over here and- and you're repetitively walking back and changing. We are at a point where after the documented untruths of this president- documented by many, many different media sources - that there is no credibility. You don't know whether to believe or not to believe, that's the worst situation you could have for a president of the United States in a dangerous world.

MARGARET BRENNAN: President Trump frequently points out that this election meddling happened on President Obama's watch. You were in the administration at the time. We heard President Obama publicly condemn Russia for doing that, but we never saw him publicly confront Vladimir Putin either.

SECRETARY KERRY: Because it was just unfolding. We discovered this in the late summer. I remember, as secretary, being in a meeting where it was disclosed to us by our intel community. I think it was August, if I recall correctly. And so you're- you're in the last moments of the presidential campaign, and the president is already being accused of, you know, engaging in trickery, and in addition, Trump, President Trump had been already publicly talking about the election being fixed, and the process being phony, and so forth. So it was essential for the president to put the people with the greatest credibility out front. And he did. The intel community went out; the Director of National Intelligence, the CIA. They framed the discussion so that--

MARGARET BRENNAN: Do you think--

SECRETARY KERRY: --so that, let me just- so that President Trump - so then candidate Trump couldn't say, "It's rigged, it's rigged. Look, this is a game for Hillary." So he had to stand back a little bit. But I was there in China when the president took President Putin aside. I know what he said to him. We had discussions about it before and after. And he confronted him. And the photograph of this - I think there were a couple photographs - the photograph shows a fairly unhappy President Putin. He made it crystal clear what would happen. And the minute we were past Election Day, so that we didn't wind up in a- in a situation- and by the way, the intel community also briefed the Republican leadership on the substance of it, and they chose to not make a move.

So the reason was, I think, that everybody was just digesting and getting a handle on exactly what they were up to. The minute the election was over, sanctions were put in place. And those sanctions have been ratcheted up since then. This is an ongoing challenge to our country. It's not- it's not a Democrat or Republican problem. This has been building for a long period of time - under President Bush, prior to that. Ever since we've had an internet there has been an escalating series of cyberattacks against corporations and against government entities. And so this is a problem for all of us as Americans and we've got to depoliticize it. We've got to get away from this constant effort to destroy a presidency whoever it is. It is tearing our country apart. And I think it's very, very dangerous for our democracy.

MARGARET BRENNAN: You were there when President Obama confronted President Putin, you said. Do you think, though, that he paid a sufficient price for meddling?

SECRETARY KERRY: I don't think at this point he has, because it continues. At that point, when we kicked people out, shut down certain entities, and- and put sanctions in place- very tough sanctions by the way. Much tougher sanctions than we've seen more recently with respect to Russia. I mean, President Trump didn't even want to implement the sanctions. How long did he sit on them for? Almost a year without putting them into place, because he didn't like them and he didn't want to do it. Something is having an impact on- on President Trump with respect to dealing with Russia. And when you go out and you attack NATO and you attack our alliance - our allies - you start denigrating major leaders who have made a very significant effort to hold Russia accountable. You are really ripping apart something critical to the security of the United States and you are doing President Putin's work for him.

MARGARET BRENNAN: I do want to ask you for your reaction to something that President Trump said to CBS News.

JEFF GLOR: Who do you think your Democratic opponent will be? Joe Biden says he'll make a decision by January. Tough opponent?

PRESIDENT DONALD TRUMP: Well, I dream, I dream about Biden. That's a dream. Look, Joe Biden ran three times. He never got more than one percent, and President Obama took him out of the garbage heap, and everybody was shocked that he did. I'd love to have it be Biden.

MARGARET BRENNAN: How do you respond to that?

SECRETARY KERRY: Well basically I'd prefer not to, to be honest with you. I think it's so outrageous. It's so personal. So unbecoming of a president of the United States to engage in that kind of- it shows fear or something, I don't know. Why is he picking that at this point in time when he has major issues he needs to deal with? Here's the bottom line. President Trump went over to have a much-heralded summit with President Putin. When he came out of two hours alone with President Putin, did they announce anything? Did they say they had an approach they were commonly going to work on towards Syria? Did they say that they were going to do something about the Middle East and violence? Did they say they had a common approach to counterterrorism? Did they say they're going to deal with North Korea? Any other of a number of major international issues. No! Nothing! Not one single positive agenda agreement for moving forward.

That's what he's trying to run away from. He wants to have you raising the question you just raised with me, which is the real question in the moment, nothing about Joe Biden or what happened in the last campaign and everything. What he does is, he's always looking for the diversion, always moving away from the real business of our country because he doesn't know how to do the real business of our country.