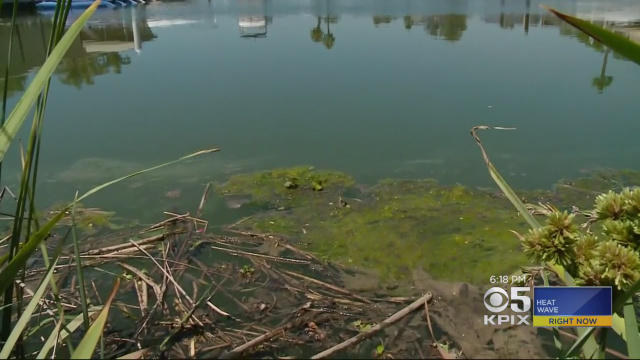 OAKLAND, Calif. -- Toxic algae has shown up in more than 40 state lakes and waterways from Los Angeles to the northern reaches of California, the highest count in state history.

Water agencies have been caught off guard by the growing extent of the algae, which is triggering health warnings, the closing of swim areas and a reduction in park visitors and revenues, the East Bay Times reported Sunday.

“The algae caught everyone by surprise, and it was difficult to get clear guidance and protocols on what to do about it,” said Carolyn Jones, an East Bay Regional Park District spokeswoman. “We went more than 80 years before we had a closure for this toxic substance in the drought.”

The cyanobacterium, which occurs naturally, can cause gastrointestinal problems and allergic reactions in people and sickness and death among pets and wildlife. The cyanobacterium has blossomed during the state’s drought.

The microbes are causing more trouble because nutrients that built up during the drought were washed off hills during this year’s rains.

Reporting of algae blooms has been spotty and inconsistent among the many different lake operators and owners. But there are many signs the algae is getting worse in California, said Beverley Anderson-Abbs, an environmental scientist with the state Water Resources Control Board.

Among the waterways affected are Del Valle Reservoir near Livermore, Pyramid Lake near Los Angeles and Lake Elsinore in San Bernardino County, which have closed at times. San Jose closed its Cunningham Lake to boating and fishing for the first time earlier this month, and Contra Costa County health officials posted warning signs this year in some waters in Discovery Bay, a boater-oriented community.

Some lake managers are testing herbicides to reduce algae blooms, but experts say there is no quick solution.

“There is no silver bullet,” Anderson-Abbs said. “Generally, the best thing to do is to stay out of the water until the bloom is over.”