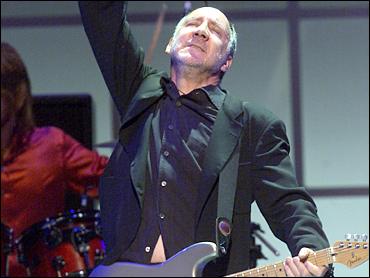 Rock guitarist Pete Townshend, co-founder of The Who, was cleared Wednesday of possessing pornographic images of children but still was placed on a national register of sex offenders.

That registration was part of a formal police caution Townshend received for accessing a Web site containing images of child abuse.

Townshend was arrested in January on suspicion of making and possessing indecent images of children. The arrest was part of Operation Ore, an FBI-led crackdown on Internet child pornography.

After a four-month investigation, London's Metropolitan Police said Wednesday the rocker "was not in possession of any downloaded child abuse images" but had accessed a site containing such images in 1999.

The musician acknowledged using his credit card to enter a Web site advertising child pornography but said he was doing research for his autobiography.

"I am not a pedophile," Townshend said at the time of his arrest.

The title character in Townshend's rock opera "Tommy" — a deaf, dumb and blind pinball wizard — is sexually abused by an uncle, and Townshend said he believed he was sexually abused as a young boy while in the care of his mentally ill grandmother.

Police said it was not a defense "to access these images for research or out of curiosity."

As part of the cautioning procedure, Townshend's fingerprints, photograph and a DNA sample will be taken by police and he will be placed on a national sex offender registry for five years.

Townshend was one of The Who's four founding members, along with bassist John Entwistle, singer Roger Daltrey and drummer Keith Moon. Moon died in 1978 and Entwistle died last year, but surviving band members continued touring.

The group, founded in London in the early 1960s, was part of the first British rock invasion with the Rolling Stones and The Beatles. Their hits included "My Generation," "I Can See for Miles," "Pinball Wizard" and "Won't Get Fooled Again."

Solange Knowles is second Black woman to have score commissioned by N.Y.C. Ballet