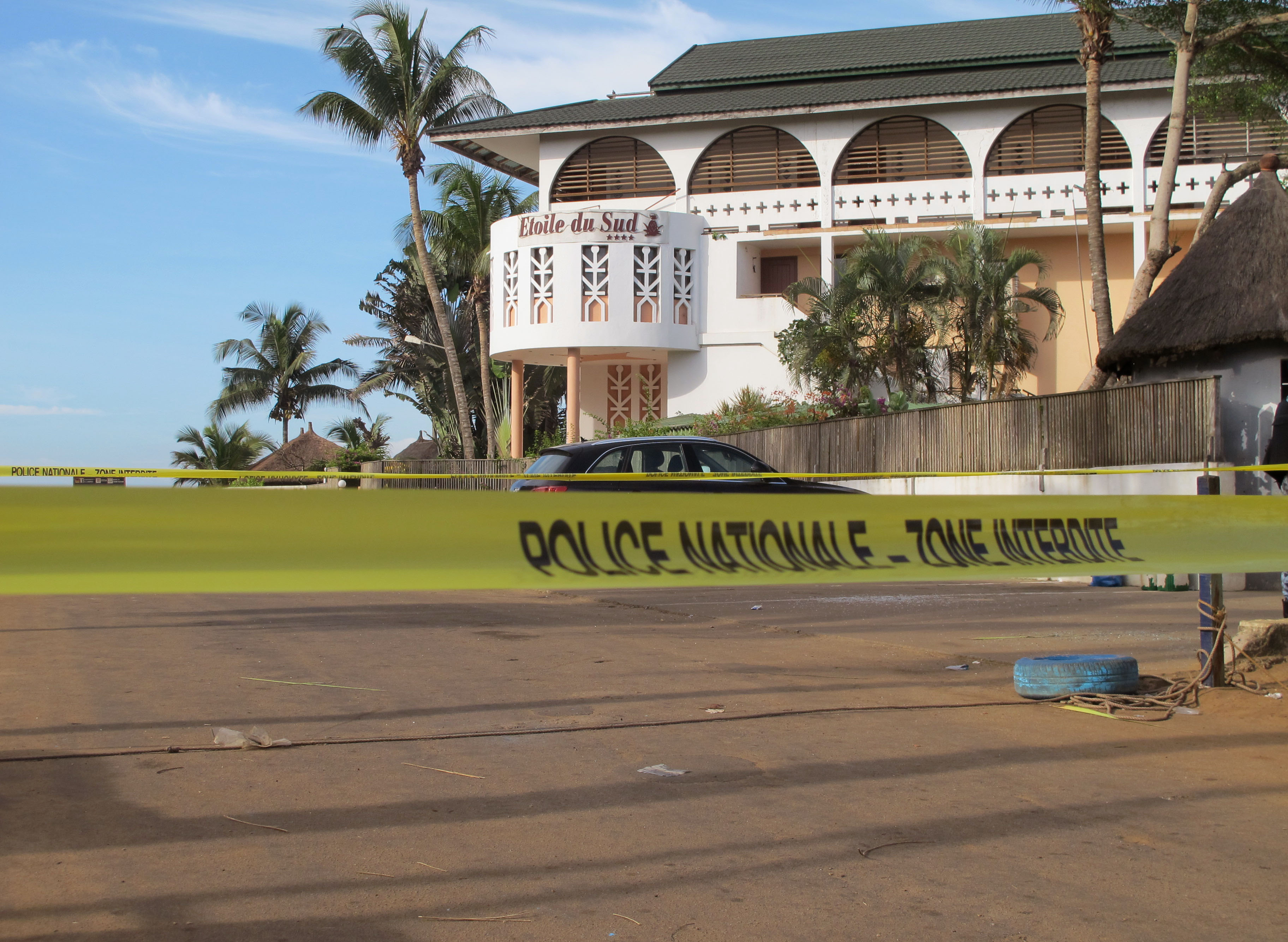 GRAND-BASSAM, Ivory Coast -- Olivier Koffi puts his head in his hands as he contemplates his future selling jewelry on Grand-Bassam beach where a gruesome attack by extremists killed 19.

"I'm afraid I won't be able to make money anymore," said the father of two young children. "Everyone is now scared, they've seen it on TV. They won't come."

His eyes welling with tears, Koffi said a colleague, a woman who sold peanuts, died in the attack.

"This village is destabilized now," he said.

Survivors of the first attack by Islamic extremists in Ivory Coast described scenes of confusion and fear as the jihadists gunned down defenseless civilians at a beachfront resort area.

The attack by members of al Qaeda in the Islamic Maghreb on Sunday hit this West African country hard, striking a symbol of Western tourism, where foreigners as well as Ivorians enjoyed life on the beach. Local businesses are now uncertain about their future, said local businessmen.

Frenchman Charles-Philippe d'Orleans said he was at the beach with a friend when he heard the first shot, and thought it was a firecracker; then he heard another and louder one. A security guard told beachgoers not to worry, that some youths had tried to enter the paid-access beach and that another guard had fired his weapon into the air, d'Orleans told French radio RTL.

But then more shooting broke out and d'Orleans and others hid behind a wall with gunmen "to the right, to the left, toward the road and toward the beach," d'Orleans told the radio interviewer. He said that when the gunfire receded he and his friend sped away in a car.

"Afterward we said 'Wow, we actually escaped something big," he said.

Ivory Coast is the third West African country to be hit recently by the extremist group al Qaeda in the Islamic Maghreb. A luxury hotel was attacked in Mali's capital in November and in January a hotel was hit in Burkina Faso's capital. All targets were places popular with Western tourists and all three countries are former French colonies.

Insecurity in Ivory Coast and the West Africa region can be costly, said Sean Smith, an analyst at risk consultancy Verisk Maplecroft.

"Ongoing insecurity in Mali has already devastated its tourism industry, with annual visitor numbers falling from just under 200,000 in 2008 to 35,000 last year. AQIM's ability to target previously unaffected countries will undoubtedly hit tourist numbers across West Africa," said Smith, who said Dakar, Senegal, may be another target.

Ivory Coast will give 300 million CFA ($500,000) to Grand-Bassam to help it recover from the attack, said government spokesman Bruno Kone. The money will go to the mayor's office to clean up the city, to the hotel associations and to local businesses, vendors and artisans, he said.

Nick Amon, an abstract artist popular with foreigners, teaches street children how to paint and relies heavily on tourist dollars.

"We need more police and security also to be sure that the people being targeted, the French, the Americans, remain safe here," said Amon.

Local police need to be able to carry guns on the beach to combat the new extremist threat, said local maritime enforcement officers, who helped respond to the attack, and who spoke on condition of anonymity because they are not permitted to speak to press. They said more equipment, including arms, radios and vehicles to drive on the sand, will help them protect those visiting the beaches.

Ivory Coast will reinforce its borders and beef up security on beaches, government spokesman Kone said. He commended the three officers who lost their lives, and the response by security forces.

"They were not there for long, the terrorists," he said, praising the quick response by security forces.

The nationalities of the attackers remains unknown, he said. al Qaeda in the Islamic Maghreb on Wednesday published photos of the three and identified them as members of al-Mourabitoun and Sahara units, according to SITE Intelligence Group.

The victims, honored in a memorial march by the Cabinet Wednesday to the beach, include four French, one German, one Lebanese, one Macedonian, one Nigerian and 11 Ivorians, including three security forces.

Regional leaders will be visiting Ivory Coast in the coming weeks to show solidarity, said Kone. Leaders from Senegal and Nigeria, as well as delegations from Ghana and Burkina Faso are expected, he said. Benin and Togo's presidents and two French Cabinet ministers visited the Ivory Coast on Tuesday.

"We are all worried, all of our countries," said Johnson Sirleaf of extremism encroaching in West Africa. "All of us are in this together."