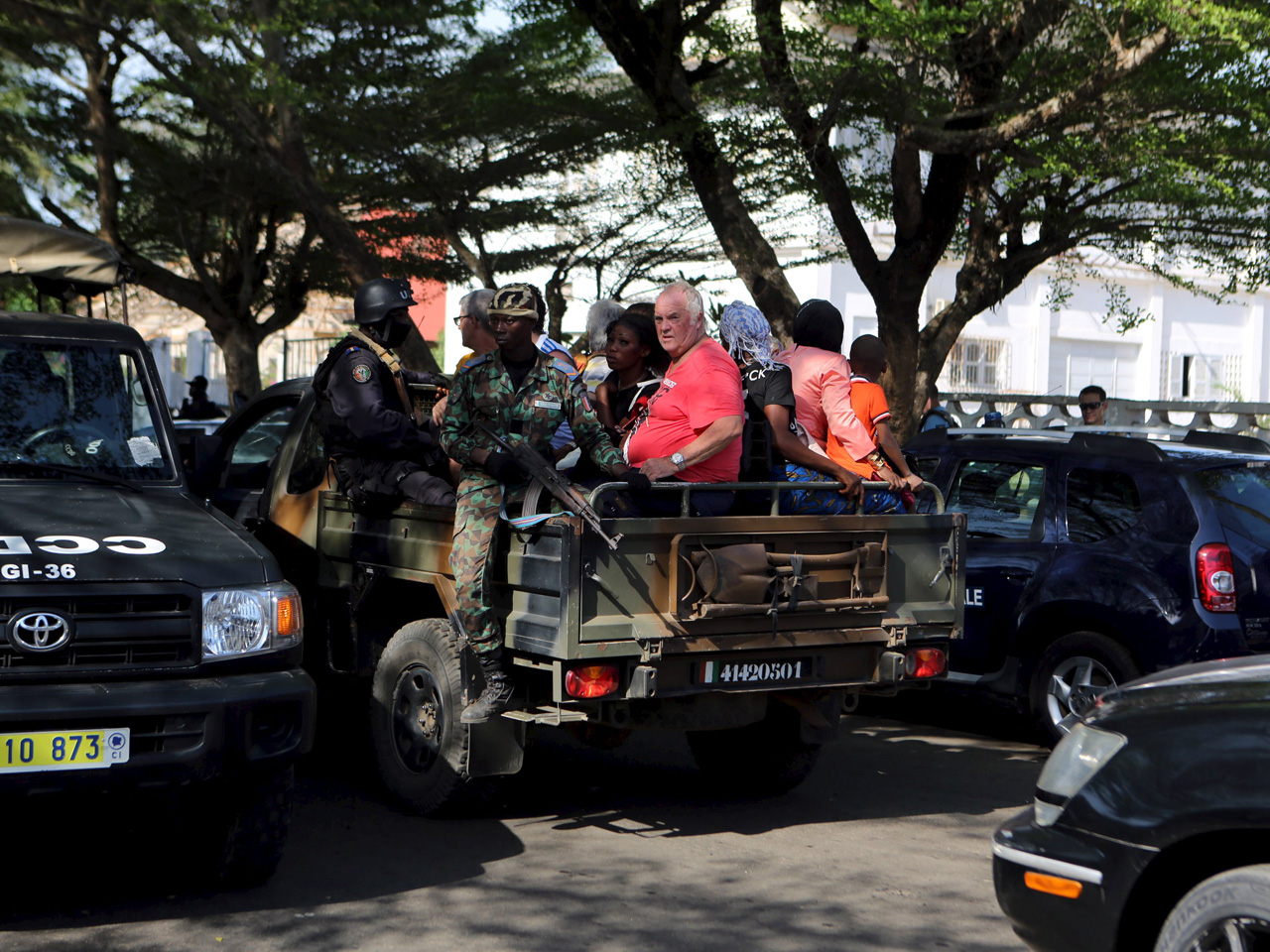 Ivory Coast's President Alassane Ouattara told reporters at the scene that 14 civilians, two special forces and six assailants were killed when the gunmen stormed the beach. The president arrived in Grand-Bassam a few hours after the attack, visiting the hotels and saluting security forces for their quick response.

"I present my condolences to the families of the people who were murdered, and of course I am very proud of our security forces who reacted so fast," Ouattara said outside the Etoile du Sud, one of the targeted hotels. "The toll could've been much heavier."

CBS News senior investigative producer Pat Milton reports a U.S. law enforcement source said there is no evidence at this point to suggest that American citizens were specifically targeted. U.S. officials are in the process of accounting for their citizens and at this time there is no information indicating Americans were killed or injured.

The source said that a U.S. Department of Commerce delegation was planning to stay at a Grand-Bassam beach resort where the attack occurred, however they had not yet arrived. The source said this was a vulnerable target for AQIM because of its location and frequency of western travelers.

"The United States condemns in the strongest terms today's terrorist attack in Grand-Bassam, Côte d'Ivoire," the statement read. "We extend our deep condolences to the families and loved ones of those who have been killed in this heinous attack."

Bloody bodies were sprawled on the beach in photos apparently taken at the scene and posted on social media. It is unclear whether any attackers got away.

CBS News Sarah Carter reports the attackers started on the beach and moved up to a hotel popular with expats and middle-class Ivorians before moving on to others.

A witness told CBS News guns, grenades and ammunition clips were found lying around one of the hotels.

Sekongo, who lives across from one of the town's many beachfront hotels, said she ran outside when she heard the gunfire and saw people running away from the beach. She said residents were hiding in their homes as security forces responded.

Some witnesses said the assailants fired at random, while others said the killing was more targeted. Witness Marcel Guy said that gunmen raced across the beach in small groups, toting Kalashnikov rifles and hunting for victims.

One gunman, who had a long beard, approached two children on the beach and Guy said he heard the man speaking Arabic. One of the children then knelt and started praying. He was spared, while the other boy was not.

"The Christian boy was shot and killed right in front of my eyes," Guy said.

An Associated Press reporter saw four bodies sprawled out on the beach in front of a small resort next to the Etoile du Sud hotel, which is popular with foreigners.

Jacques Able, who identified himself as the owner of Etoile du Sud, said he rushed to the hotel after getting a phone call. He said one person had been killed at the hotel.

A receptionist at the Etoile du Sud described the mayhem.

It was unclear how many assailants were involved. The historic town of Grand-Bassam is a UNESCO World Heritage site.

In January, more than two dozen were killed at a hotel popular with foreigners in nearby Burkina Faso, in an attack claimed by Islamic militants. Officials feared the spread of the extremists is no reaching further throughout the region.

In June of last year, 30 British tourists were among the 38 victims killed by an Islamic extremist at a Tunisian beach resort. The lone gunman was reported to have strolled along the beach with an AK-47 killing anyone he could.

"I have always said that Abidjan (Ivory Coast) and Dakar (Senegal) are the next targets for jihadist groups because these two countries represent windows of France in Africa," said Lemine Ould M. Salem, an expert on al Qaeda in the Islamic Maghreb and author of a book "The Bin Laden of the Sahara."