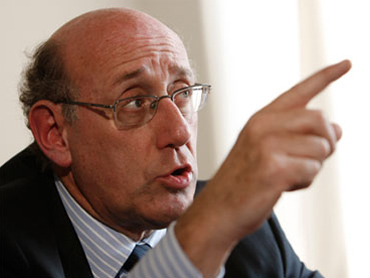 Is a strip club that caters to oil-rig workers entitled to a piece of the $20 billion fund for victims of the Gulf of Mexico disaster? How about a souvenir stand on a nearly empty beach? Or a far-off restaurant that normally serves Gulf seafood?

The farther the massive spill's effects spread, the harder it will get for President Barack Obama's new compensation czar to decide who deserves to be paid.

Fishermen, rig workers and others left jobless by the oil spill seem certain to get their slices of the pie, sooner or later. It's the people and businesses a few degrees - and perhaps hundreds of miles - removed from the Gulf but still dependent on its bounty who will have a tougher time getting their claims past Kenneth Feinberg, the lawyer who handled payouts for families of Sept. 11 victims.

"How can there not be a trickle-down effect?" said Jeffrey Berniard, a New Orleans lawyer who represents about 100 people and firms filing claims against BP PLC. "How can the businesses that serve all the people who work in the industry not be affected if all the people in these industries are out of work?"

The question of who gets paid also gets trickier with time. As the spill enters its third month, Berniard and other attorneys say they're hearing more from people who might not have been affected right away.

One of Berniard's clients is a health care consultant who makes her living matching doctors with hospitals looking to hire medical help. She usually places about a dozen doctors in a good year, he said, so one contract is a big loss.

The woman had a doctor lined up recently for a job at Florida Panhandle hospital.

"All of a sudden, the oil spill hits and the doctor says, 'I don't want to spend the next 10 or 15 years there,"' Berniard said. "I'm not overly optimistic her claim will be paid through the claims process. I think we'll have to go into litigation. But we'll see."

Feinberg has pledged to speed payments to fishermen, business owners and others who have lost money. He visited the Gulf region Tuesday.

BP PLC claims director Darryl Willis vistied a claims center in a rundown strip mall in Bayou La Batre, Ala., on Tuesday and said the company has already cut 37,000 checks for $118 million. Claims totaling about $600 million have been filed so far.

"Anyone who feels like they have been damaged or hurt or harmed has every right to file a claim," Willis said. "These are complicated in some cases, and in some cases they're straightforward. But every person should file their claim, and they will be looked at fairly."

Charles Lavis Jr., another New Orleans lawyer, said he's fielded several inquiries from people worried the value of their recreational boats could drop if they are driven through an oil slick or if fewer people are interested in buying them because they don't want to cruise along an oil-spattered coast.

There has been so much confusion over who is eligible that Feinberg has had to respond to rumors about a New Orleans strip club putting in for a payout.

The business, called Mimosa Dancing Club, turns out to be a modest bar with a small dance floor in a Vietnamese enclave on the east side of the city, at least an hour from any oiled waters. The owner did not return messages seeking comment. A woman who identified herself as the owner's sister, but would only give her first name, said the establishment was not a strip club and said she did not know whether the owner had filed an oil spill claim.

BP spokesman John Curry said the company does not comment on individual claims.

Meanwhile, shares of the British oil giant plummeted to their lowest level in 13 years Tuesday as chief executive Tony Hayward started handing over control of the cleanup to the company's managing director. Stocks in BP traded as low as $4.95 in London, the weakest since February 1997.

And BP PLC said this week it has spent $2 billion fighting the spill, with no end in sight. It's likely to be at least August before crews finish two relief wells that are the best chance of stopping the oil. Scientists estimate the blown-out well has gushed anywhere from 67 million to 127 million gallons of oil into the Gulf.

Under pressure from the White House, the company will pay $20 billion into a compensation fund that will be administered by Feinberg. Curry said the company has not rejected any of the more than 67,000 claims it has received, although it has asked thousands of people for more documentation before cutting a check.

That could be a problem for many of those who need money most urgently, said Tuan Nguyen, deputy director of the Mary Queen of Vietnam Community Development Corp. in eastern New Orleans, where many immigrants and their families work in the seafood business.

"It's a very cash-involved industry. Some of the boat captains or boat owners, they sell fish on the side of the road or directly to families. They don't have records of that," Nguyen said.

Feinberg said that when drawing the line, he probably will try to determine if the law in the state where the claim is filed would recognize it if it were filed in court, a process he used in determining who had a legitimate claim to the 9/11 victims fund. He expects to use slightly different methods when fielding claims from different categories of businesses, say, fishermen versus hotels.

"We have to decide in this facility how far removed from the Gulf we will find legitimate, valid claims," Feinberg said Tuesday at an appearance alongside Alabama Gov. Bob Riley in Mobile.

"The buck stops with me in terms of an initial determination," Feinberg said, but the claimant can appeal to a panel of three retired judges, who will be appointed by him from the Gulf states. Those judges will rule in about 10 days, and claims applicants can sue in state court if they aren't satisfied.

The spill's financial waves start at the water's edge and spread inland.

In Pensacola, Fla., a linen cleaning firm that normally cleans sheets for hotels and condominiums rented to vacationers has lost $50,000 since the oil spill began, said Carol Moore, an investigator for a law firm representing the company.

A vending company whose machines supply candy bars, potato chips and prepackaged sandwiches has seen business drop by $25,000. About a dozen banks in the area are filing claims as customers who took out loans to fund condominiums and bait-and-tackle shops struggle to make payments, Moore said.

"It is so huge that you wonder if $20 billion is going to be enough," she said.

Near Chapel Hill, N.C., Gary Huey said he typically goes through two dozen, 125-count boxes of raw oysters and another 12 gallons of shelled oysters a week at Huey's Restaurant and Oyster Bar. His Mississippi-based supplier has been able to keep him stocked so far, but has told Huey he will have to cut him off in two weeks.

"In this area there are not many oyster bars, it is my niche so to speak," Huey said. "Or it was."

Since the spill started, the price of Gulf shrimp also has gone up and it has become harder to come by since many distributors are limiting how much they will sell, he said. Huey nonetheless is not sure whether he will file a claim with BP.

"They could get in a situation that every restaurant that serves a little bit of seafood would be filing a claim, and I don't know where it stops at," he said. "I'm a fairly decent-sized restaurant, and seafood is our business, but I don't see how every restaurant could qualify."

While the prospect of lawsuits awaits, some who are missing out simply want to stay afloat.

Emma Chighizola, 68, is used to seeing dozens of tourists pouring through her doors at Blue Water Souvenirs in Grand Isle, snapping up T-shirts, rafts, shell jewelry and coolers. She and her husband filed a business claim with BP more than a month ago and "haven't gotten a penny."

Her husband went to a BP claims office over the weekend and was told the paperwork was still being processed.

"How much time do they need?" she wondered. "All I want is what I'm losing, I don't want any more."