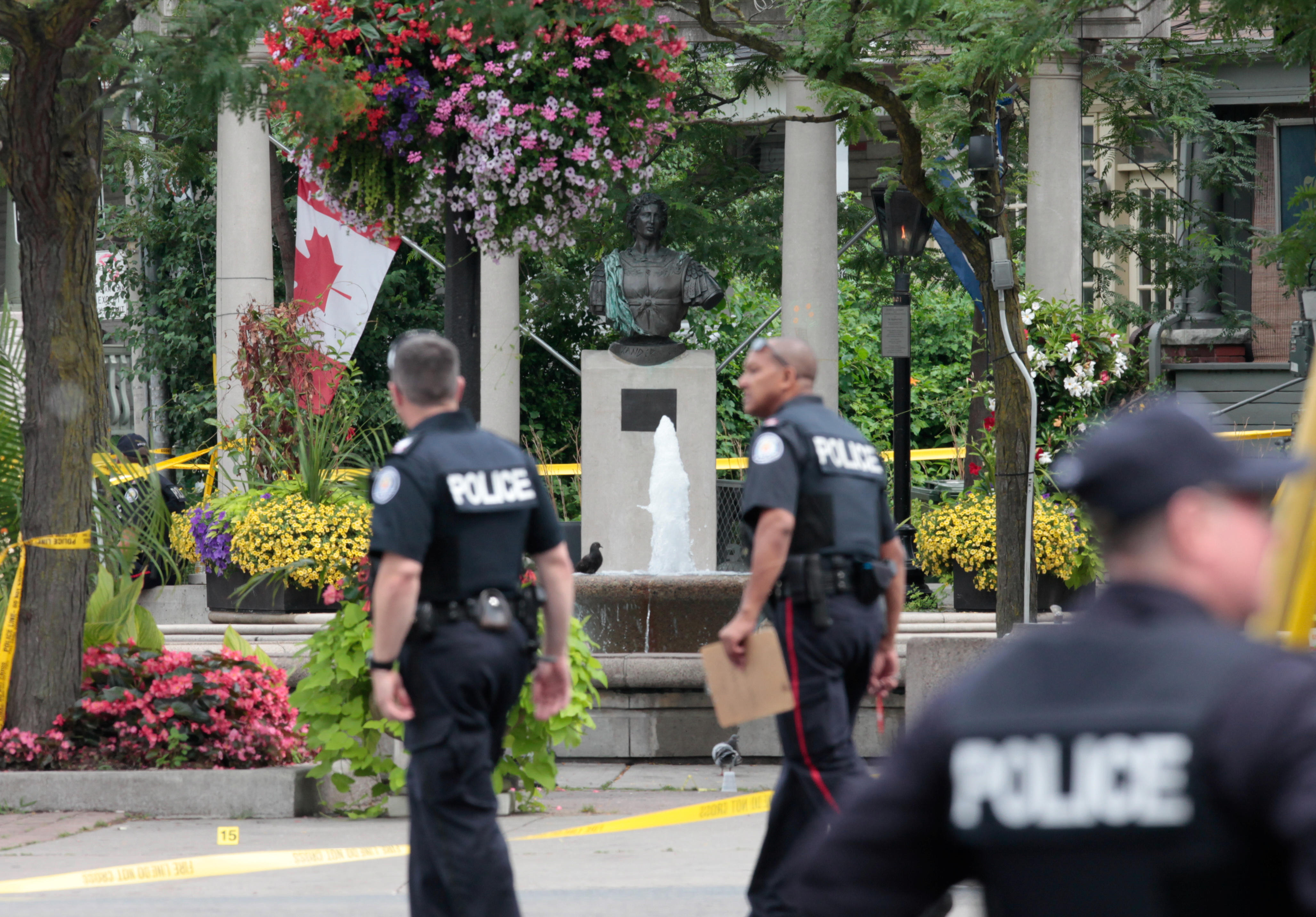 TORONTO -- Of all the things people in Toronto are horrified by in the aftermath of the shooting that killed two people and injured 13, this stands out: The man responsible had a handgun. To mass shooting-weary America - where there are about 300 million guns of all kinds - possession of a handgun might seem commonplace.

But in Toronto, the very idea that someone would have a handgun, much less take it out in public and fire it, is nearly incomprehensible. On Tuesday evening, after nearly 10 hours of discussing gun crimes, the City Council voted to urge the federal and provincial government to ban the sale of handguns and handgun ammunition in the largest city in Canada, and the fourth largest in North America.

"If anything, what's happened in the United States is what not to do," said City Councilman Joe Cressy, who proposed the motion Tuesday. Agreed Toronto Mayor John Tory: "Why does anyone in this city need to have a gun at all?"

The measure passed 41 to four; the country's public safety minister said Tuesday that Ottawa was already considering tightening handgun laws, even prior to Sunday's shooting.

It's unclear how the shooter in Sunday's tragedy obtained his gun. And officials haven't discovered a motive for why 29-year-old Faisal Hussain targeted diners enjoying a warm summer night at restaurants and cafes in Toronto's popular Greektown neighborhood, killing a 10-year-old girl and 18-year-old woman. His parents said he had suffered from severe mental illness his entire life.

Cressy acknowledged that banning handguns isn't the only thing Toronto should do to combat gun violence, which is on the rise in the city of roughly 3 million residents. Even before Sunday's shooting, city leaders were concerned about an uptick in gun violence that had prompted the Toronto police to deploy dozens of additional officers over the weekend. Toronto has seen 23 gun homicides so far this year, compared to 16 fatal shootings in the first half of 2017.

Cressy said crime prevention programs, helping those released from prison find jobs, mentoring kids and diversion programs are all initiatives that should be beefed up, along with meeting people's mental health needs.

Canada overhauled its laws after the country's worst mass shooting in 1989, when gunman Marc Lepine killed 14 women and himself at Montreal's Ecole Polytechnique college. It's now illegal to possess an unregistered handgun or any kind of rapid-fire weapon. Canada also requires training, a personal risk assessment, two references, spousal notification and criminal record checks to obtain a permit.

Canadians have long taken comfort in the peacefulness of their communities and are nervous about anything that might indicate they are moving closer to their American counterparts.

"There isn't a handgun culture here," said Toronto resident Alison MacLean, shaking her head and wearing a T-shirt with symbols of a peace sign, a heart and a moose. "Handguns aren't part of the common discourse."

Before 2012, about 75 percent of illegal firearms in Canada were trafficked from the United States. By 2017, however, about half originated from domestic sources, putting an end to the idea that most of Canada's illegal guns come from across the border, said Det. Rob Di Danieli of the Toronto police guns and gangs unit.

The allure of a quick sell at a high profit margin is one reason legal owners might sell their guns. One man sold 47 guns and made over $100,000 in a five-month period, Di Danieli said.

"They go get their license for the purpose of becoming a firearms trafficker," he said. "A lot of people are so ready to blame the big bad Americans, but we had our own little problem here."

A big difference between Canada and the U.S. is the Second Amendment of the U.S. Constitution, which grants Americans the right to bear arms. In Canada, gun ownership is not enshrined in the constitution.

"Canadians, unlike Americans, do not have a constitutional right to bear arms," Canada's high court said in a 1993 decision that upheld a ban on convertible semi-automatic weapons.

"Indeed, most Canadians prefer the peace of mind and sense of security derived from the knowledge that the possession of automatic weapons is prohibited," the court said.

Another difference is that Canadian politicians are not beholden to groups like the National Rifle Association, which donates millions of dollars to U.S. campaigns. Canada's federal elections laws put limits on contributions to political parties so that only individuals, not corporations or lobby groups, may donate.

In the wake of Sunday's shooting, many here said they were reminded of another mass shooting, one that happened 1,500 miles away in Florida in February, when a former student walked into a school with an assault rifle and killed 17 students and staff members and injured 17 others.

"I was thinking about the victims in Parkland, and their strength," said 24-year-old Laila Hawrylyshyn. "And I hope the victims here in Toronto have the strength to recover from this."

She and a several dozen of her classmates in a government relations class at York University attended the City Council session on Tuesday where council members discussed gun violence with the city's police chief.

Said Cressy: "A 10-year-old and an 18-year-old dying is heartbreaking enough. I can't fathom what it's like as a parent to wake up and send your child off to school and wonder if they'll be killed. That's not a city you want to live in."