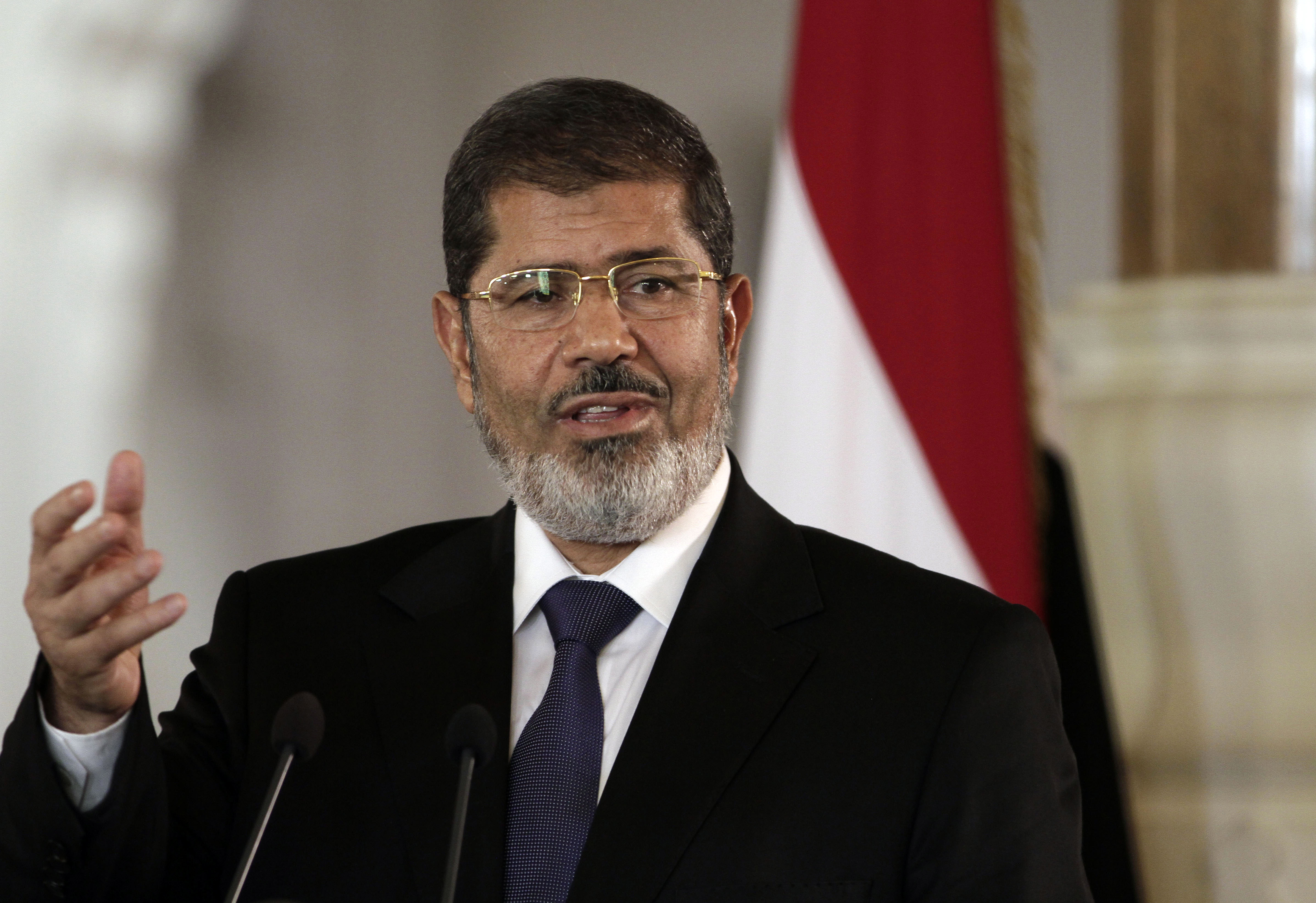 CAIRO -- Egypt's toppled President Mohammed Morsi appeared at a new trial Tuesday wearing a white prison uniform in soundproof glass-encased metal cage, pacing and shouting angrily at the judge in apparent disbelief: "Who are you? Tell me!"

In a half hour of recorded footage aired on state television, Morsi protested being in a cage for his trial on charges related to prison breaks in 2011, yelling: "Do you know where I am?"

The trial coincides with the third anniversary of one of the most violent days of Egypt's revolution that year that broke the country's police force and caused it to abandon patrolling the country's streets. Morsi supporters, meanwhile, clashed with police Tuesday in central Cairo as gunmen killed an aide to the country's interior minister.

The former president, ousted in a popularly backed July 3 coup, also declared to the judges that he remains Egypt's legitimate leader during an un-aired portion of the hearing, a state television reporter inside the courtroom said. In aired footage, defendants chanted that their trial was "invalid." Earlier, the defendants turned their back to the court to protest their prosecution, the state television journalist said.

Morsi raised his hands in the air and angrily questioned why he was in the court. Judge Shabaan el-Shami responded: "I am the head of Egypt's criminal court!"

Morsi paced in a metal cell separated from other defendants. Earlier, a promised live feed was cut, something a senior state television official told local media that security forces demanded.

This is the second time Morsi has appeared in court since the coup. At his first appearance in November, Morsi wore a trim, dark suit and appeared far less agitated, though he interrupted the judge and gave long speeches.

Authorities apparently resorted to the glass-encased cage to muffle the defendants' outbursts, which have disrupted the previous hearing. The judge controls the microphone to the cage.

Morsi already faces three other trials on various charges, some of them carrying the death penalty.

Tuesday's case is rooted in the 2011 escape of more than 20,000 inmates from Egyptian prisons - including Morsi and other Muslim Brotherhood members, during the early days of the 18-day uprising against ousted President Hosni Mubarak. Morsi and the other Brotherhood leaders were detained three years ago Monday as Mubarak's security tried to undercut the planned protests.

At the time, authorities also cut off Internet access and mobile phones networks for four days, crippling communication between protesters and the outside world.

In court Tuesday, 19 other defendants appeared with Morsi. Another 110 defendants, including members of the Palestinian militant group Hamas and Lebanon's Hezbollah, are being tried in absentia.

Authorities have said the jailbreaks were part of an organized effort to destabilize the country. Rights groups have called for an independent investigation into the chaotic events, saying they hold the police responsible for the pandemonium. A Brotherhood lawyer has said the trial appears aimed at "denigrating" Morsi and the Brotherhood.

The hearing is at a police academy complex in eastern Cairo, where a heavy security presence stood guard Tuesday.

Tuesday marked the third anniversary of "Friday of Rage," one of the most violent days of the 2011 uprising when protesters and police clashed for hours before police withdrew from the streets and the military deployed.  Morsi supporters clashed Tuesday with police forces in central Cairo, miles from the courtroom, with police lobbing tear gas to disperse the crowd that had burned tires in a main busy street.

Meanwhile, the interior ministry said two gunmen on a motorcycle shot and killed a senior police officer as he left his home in the Haram district of Giza, a Cairo neighborhood. Maj. Gen. Mohammed El-Said was the head of the technical office in the interior ministry, which is in charge of police.

Also Tuesday, MENA reported that gunmen blew up a natural gas pipeline Monday night in the volatile Sinai Peninsula south of el-Arish, the capital of the North Sinai governorate. It said firefighters rushed to the scene to extinguish a fire there.

Gas pipelines have come under attacks several times since Mubarak's downfall, which led to a fracturing of Egypt's security agencies. Suicide bombings also have spiked and spilled into the capital, Cairo, and other cities. An al-Qaida-inspired group called Ansar Beit al-Maqdis, or Champions of Jerusalem, has claimed responsibility for most of those attacks.