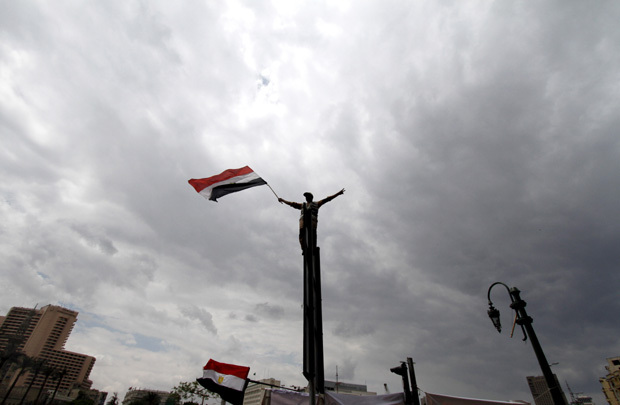 CAIRO - The same message appears on the Facebook page of Egypt's armed forces every day: Trust us, we remain on the side of the Arab Spring.

Yet it's reaching out to an increasingly tough audience — the young and impatient legions who launched Egypt's historic uprising and are now wondering why it all seems stalled with elections still months away and military caretakers firmly in charge.

The simmering frustrations in Egypt — more than three months after the stunning downfall of Hosni Mubarak — offer a distinct counterpoint to the soaring encouragement for Arab aspirations in Barack Obama's address on Thursday to mark what the U.S. president called the region's "season of change."

"The events of the past six months show us that strategies of repression and diversion won't work anymore," Obama said in Washington in a speech that included pledges of economic aid and initiatives for Egypt and Tunisia.

Although Tunisia is the birthplace of the Arab revolts, Egypt's 18-day uprising is unquestionably the landmark event in the region's epic challenges to the political order.

But Egypt also highlights some of the huge obstacles facing the wider Arab goals of building new systems without the proper tools at hand: a lack of clear leadership or vision among the new political stake holders, deep-rooted ties to the old regime in nearly every aspect of life and few institutions capable of carrying the load on the way to democracy.

Hundreds of protesters in central Cairo called Friday for the resignation of the military officer who became Egypt's de facto leader after Mubarak.

"There is conflict between those who want to push for change and those who oppose it. That is why we have ambiguity and confusion," said Mustapha Kamel al-Sayed, a political science professor at the American University in Cairo. "No revolution succeeded in toppling the old order in 24 hours. It takes time."

In various ways, Egypt carries lessons for the upheavals that followed across the region.

A tipping point against Mubarak was the military's refusal to defend the regime with widespread attacks against protests. Other regimes took note. When protests broke out in Syria and the Gulf state of Bahrain, security forces answered with smothering assaults, arrests and crackdowns.

The uprising in Bahrain appears to have collapsed under the pressures. The island kingdom imposed martial law-style rule in March and brought in a Saudi-led military force against the protests by the nation's majority Shiites, who claim of widespread discrimination by the ruling Sunni monarchy.

But Bahrain's leaders also have some breathing room as one of Washington's most critical military allies. It's home to the U.S. Navy's 5th Fleet, the Pentagon's main force confronting Iran's military ambitions in the Gulf. U.S. officials have denounced violence in Bahrain, but stopped short of any direct punishments.

Obama described Bahrain as a "long-standing partner," but said its arrests and crackdowns on protesters "will not make legitimate calls for reform go away."

Syria, meanwhile, is coming under a growing international campaign to force President Bashar Assad to back down. On Wednesday, the U.S. imposed new sanctions targeting Assad and senior officials, and the Europe Union was pushing for similar measures to punish Syria after two months of crackdowns that have killed more than 850 people.

Assad's regime replied with defiance Thursday, saying the sanctions would never undermine Syria's "independent choices and steadfastness." At the same time, Syrian forces continued to shell the border town of Talkalakh, which is believed to be a smuggling hub through territory loyal to Assad.

Obama's retort to Assad: He can lead the transition for greater political rights "or get out of the way."

If there's one epilogue from the swift collapse of the regimes in Tunisia and Egypt earlier this year, it could be this: Don't expect it to happen again like this soon.

The Arab uprisings have gone from heady and fast-moving narratives to grind-out battles with outcomes far from certain. They are further complicated by complex tribal allegiances in places such as Yemen and a sectarian web in Syria ruled by the minority Alawites, who have close ties with Iran.

In Yemen, mediators from neighboring Gulf nations left empty handed Wednesday after trying to broker an end to the three months of conflict between protesters and forces loyal to President Ali Abdullah Saleh, who has ruled for more than 30 years. Washington has stepped up its calls for Saleh to accept some kind of exit strategy, but Saleh has stood firm.

The battlefield in Libya summed up the stalemate: Moammar Gahdafi's forces pound rebel fighters with rocket barrages even as widening NATO airstrikes try to break the Libyan leader's will to fight.

But Obama noted that the struggles across the region may last for years.

"Change of this magnitude does not come easily," he said. "In our day and age — a time of 24 hour news cycles, and constant communication — people expect the transformation of the region to be resolved in a matter of weeks. But it will be years before this story reaches its end. Along the way, there will be good days and bad days."

Perhaps no place is more mired in this internal discourse than Egypt.

The protesters who led the revolt against Mubarak appear increasingly disenchanted with the pace of reform — in a mix of youthful impatience and suspicion that the military rulers may refuse to step aside despite parliamentary elections planned for September. Feeling the heat, the military has responded with a blitz of Facebook messages in the past week promising it will not stand in the way of change.

The head of Egypt's Military Council, Field Marshal Hussein Tantawi, urged Monday for an end to strikes and sit-ins calling for wider corruption probes into Mubarak's regime and replacing the military caretakers with a civilian council.

"Let's leave the past aside, not forget it, but put it aside for now so that we can push forward with the most energy we have," he said in his first nationally television address at a graduation ceremony for police cadets.

Still, the conversations among Egypt's youth are mostly peppered with frustration over the military crackdowns on post-Mubarak demonstrations for demands that include trials for Mubarak and his close allies. On the main boulevard through Cairo's suburbs, a team of activists painted the curb blocks and shouted to passing cars: "We are doing something, where is the government?"

Bilal Fadl, a columnist in the daily Al-Masry Al-Youm, has turned increasingly dark as he chronicles the frustrations that toppling Mubarak has not been followed by a total overhaul of the system.

"I now love death and hate living one more day under the shadow of the revolution that has been whittled down for reasons I don't know and I don't want to know," he wrote Thursday. "All I know now is that we will be damned if we forgo our rights and live under the shadow of a semi-valid, semi-just or semi-straight system."

On Thursday, Egypt's finance minister said the budget deficit could hit $31 billion in the next fiscal year as the government struggles with economy battered by uncertainties after Mubarak's fall but also under pressure to increase spending to meet popular demands for jobs and services.

"Everyday things are getting worse," said Muhannad Galal, a 27-year-old executive at the Cairo offices of Yahoo! "We have the same mentality in place making decisions."

Galal has called for a "new revolution" gathering on May 27 in Cairo's Tahrir Square, the center of the anti-Mubarak uprising. "Our revolution is stolen," was the slogan on a placard he wore over his chest.

But many worry that it's too soon to raise such alarms. "Is it time for confrontation?" asked Shady el-Ghazali Harb, a protest leader during the 18-day uprising.

"I think the timeframe is woefully unrealistic," said Rami Khouri, director of the Issam Fares Institute of Public Policy and International Affairs at the American University of Beirut. "They've only been doing this for a few months after 50 years of one-party, military rule. These things take time."