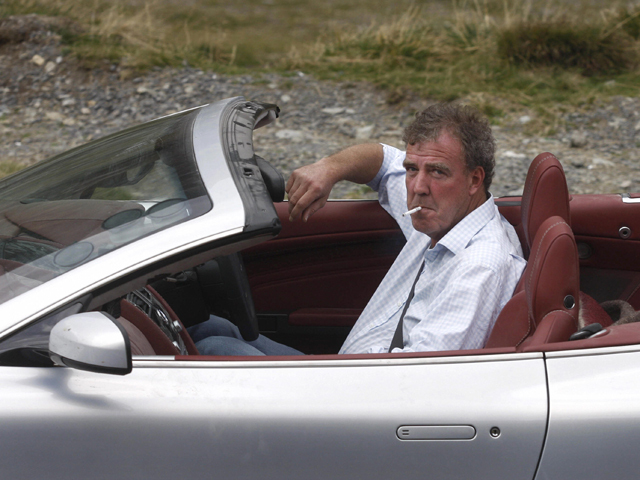 The British TV show called "Top Gear" features some of the hottest new cars, but it's the show's host, Jeremy Clarkson, who is now garnering attention for saying British public employees who went on strike this week should be shot.

The British Broadcasting Corporation is caught in the middle - between its famous integrity and a star with a money-making franchise.

Landing at London's Heathrow Airport, Clarkson said his remarks were meant to be a joke.

"If you see what I actually said, then you can judge," Clarkson said.

This is what he actually said on TV about the millions of public workers who went on strike this week: "I'd have them all shot. I would take them outside and execute them in front of their families."

Tens of thousands of people called in to complain, telling his BBC bosses Clarkson's head should roll, which puts the BBC in a bind. Clarkson's shows earn the corporation millions.

Even Prime Minister David Cameron - who is a friend - found himself sucked into the controversy.

He's the star of "Top Gear,"in which Clarkson, Richard Hammond, James May and The Stig put cars through their paces. But it's the often irreverent commentary that keeps millions tuned in.

It's also got the attention of CBS News' "60 Minutes."

At another point, Clarkson has said, "It is a weekly occurrence that somebody will complain 'Top Gear' was on last night. And it's just - you sit back and wait for the complaints. But if you start to pay attention to everybody`s concerns, you end up with something bland and boring."

In that past, he's called former Prime Minister Gordon Brown - who's half blind - "that one-eyed Scottish idiot."

Clarkson has issued something of an apology for his latest remarks, saying, "If the BBC and I have caused any offense, I'm quite happy to apologize for it alongside them."

Maybe because he reportedly cleared it with a BBC producer before going on air. They knew what to expect, D'Agata noted.

"He's garnering publicity for himself, that's what he does and does it very well. He sets out to shock and he always succeeds," said Kevin O'Sullivan, a TV critic for the U.K. publication Daily Mirror.

D'Agata added all that attention won't hurt sales of the DVD's Clarkson is promoting - just in time for Christmas.