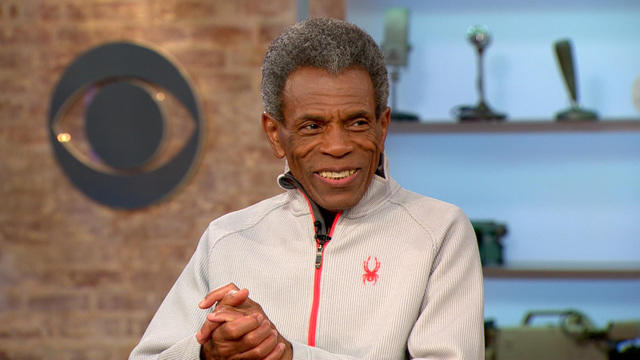 A modern-day musical rooted in ancient Greek mythology, "Hadestown" received praise fit for the gods, and last night nabbed eight Tony Awards, including Best Musical. Among the recipients: Broadway legend André De Shields, who originated the title role of "The Wiz" 44 years ago. He took home his first Tony for Best Featured Actor, after a 50-year career (and two previous nominations).

The 73-year old told co-host Anthony Mason last week he's living out the dream of his late parents. After receiving the call about his Tony nomination, he turned off his phone: "I shut it off because I needed to have that conversation with mom and dad and say, 'This might be the one.'"

In his acceptance speech at Sunday's awards ceremony, at Radio City Music Hall in New York, De Shields said, "Baltimore, Maryland, are you in the house? I hope you're watching at home, because I am making good on my promise that I would come to New York and become someone you'd be proud to call your native son."

Appearing on "CBS This Morning" the morning after, De Shields said it was his parents' dream to become performers, and that they had done so, vicariously, through his career.

The Tony recognition, Mason said, must have meant an enormous amount to him.

"Absolutely," De Shields said, "because I always considered that to be a karmic debt that I needed to pay to my parents, because it was there at conception time that absolutely formed the purpose of my life. I never had to question: 'André, what are you supposed to do with your life?'"

"Did you talk to them after the award?" Mason asked.

In his acceptance speech De Shields also shared three rules for sustaining a long career: "One, surround yourself with people whose eyes light up when they see you coming; two, slowly is the fastest way to get to where you want to be; and three, the top of one mountain is the bottom of the next, so keep climbing."

He said taking things slowly is key for those considering a life on stage, which he described as "a profession that guarantees only two things, which are not fame and fortune; it's rejection and insecurity. So, you can't be in a rush for that."

"So, getting [the award] at this time in your life, 73, is sweeter for you?" asked co-host Gayle King.

"Sweeter for me. Just the other day a colleague of mine who just celebrated his 47th birthday said to me, 'You know, André, I'm experiencing a mid-life crisis. Do you have any advice for me?' I said, 'I have to disappoint you, friend, because I have yet to reach my mid-life, so I can't talk to you about mid-life crises.'

In advance of the Broadway cast album (available June 26), you can preview tracks from "Hadestown" by clicking on the embed below (Free Spotify registration required to hear the tracks in full):