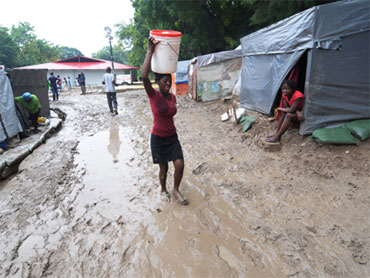 Hurricane Tomas was downgraded to a tropical storm early Saturday as it passed over the Turks and Caicos Islands, losing steam a day after battering seaside towns in Haiti.

Haiti was pummeled with 85 mph winds and from five to ten inches of rain. A foot of standing water fills the capital of Port-au-Prince, where four people are dead and two are missing.

Across the Caribbean at least 19 have died.

It's been raining all night in Port-au-Prince and, for earthquake refugees living in tent cities, it has been a miserable night, reports CBS News producer John Bentley.

There over a million people living in the portable structures, and the rain has been coming down since the sun went down. The streets are flooded and a lot of rivers and streams are overflowing, causing a lot of problems. But as far as Hurricane Tomas goes, Haiti dodged a bullet - the eye missed Port-au-Prince.

If they didn't get the strong winds and major flooding they were worried about, the other problem will be how the storm affects the water and sewage supplies - important as Haiti battles a cholera epidemic in which 400 people have died.

As of 5 a.m., the storm was about 30 miles north-northwest of Grand Turk Island and was carrying maximum sustained winds of 70 mph.

On Friday, panicked residents fled a coastal city in Haiti that had been slammed twice already this decade by killer floods. The hurricane spared most earthquake-refugee camps in the capital but battered a seaside town to the west that was nearly destroyed by January's earthquake.

It then flooded camps harboring earthquake refugees, turning some into squalid islands in Leogane, a town west of the capital that lost 90 percent of its buildings and thousands of people in the Jan. 12 quake. Two people were missing in the city.

Tomas turned streets of the capital, Port-au-Prince, into canals of flowing garbage. The storm largely spared the city's vast homeless encampments, however, allaying fears that an estimated 1.3 million displaced people would suffer from high winds and rain on hillsides and in parks and streets.

Haitians had high hopes that the storm would move on before triggering floods in Gonaives, a northwestern coastal city that completely flooded in 2004 and again in 2008, killing thousands. As rains fell on the city's slums of Raboteau and Jubilee, people living in the low-lying areas began heading for high ground.

"It's not a major flood, but it's flooding in some areas," Doctors Without Borders spokesman Francois Servranckx told The Associated Press.

Earlier in the day, police in Gonaives evacuated more than 200 inmates from one prison to a town farther down the coast.

It could be days before the storm's impact is known, as reports had only begun to filter in from isolated mountain towns cut off by the flooding. But as officials took stock and aid workers rushed to contain flood damage and a widening cholera epidemic, Tomas left harsh reminders of poverty's toll on the Caribbean nation.

"We have two catastrophes that we are managing. The first is the hurricane and the second is cholera," President Rene Preval told the nation in a television and radio address.

He could have included a third: the scores of collapsed buildings and sprawling refugee camps that still dominate the landscape 10 months after a magnitude-7 earthquake turned the capital into rubble.

Old and new disasters mingled in Leogane, where milky brown floodwaters filled quake-cracked streets and cut off a camp that had been home to hundreds of refugees.

Dozens of families carried their belongings from one camp through thigh-high floodwaters to a taxi stand on higher ground, huddling under blankets and a sign that read "Welcome to Leogane."

"We got flooded out and we're just waiting for the storm to pass. There's nothing we can do," said Johnny Joseph, a 20-year-old resident.

Protesters in Leogane took to the streets in the pouring rain, beating drums and blasting horns as they lambasted officials for failing to build a canal along a river that has overflowed repeatedly in the past. Floodwaters filled people's homes, swirling around the furniture and framed pictures.

"When it rains the water rises and causes so much damage. We want them to dig a canal to move the water," said Frantz Hilair, a 28-year-old motorcycle-taxi driver. "We have a mayor and the deputy, but they don't do anything."

Tomas had earlier killed at least 14 people in the eastern Caribbean. On Friday it came ashore as a Category 1 hurricane, pummeling Haiti's southern peninsula, before moving on to the rest of the country, eastern Cuba and the Bahamas.

Haitian authorities had urged the 1.3 million people left homeless by the earthquake in Port-au-Prince to leave the refugee camps and go to the homes of friends and family. Buses were sent to take those who wanted to evacuate to shelters.

But many chose to stay in the camps' donated plastic tarps out of fear that if they didn't, they would be permanently evicted from the private land where they have been camped out since the quake. They also feared losing their few possessions.

A near-riot broke out amid a poorly coordinated relocation effort at the government's flagship camp at Corail-Cesselesse when residents began overturning tables and throwing bottles to protest what they saw as a forced removal.

About a third of the camp's nearly 8,000 residents ultimately went to shelters in a nearby school, church and hospital, American Refugee Committee camp manager Bryant Castro said. But there was no space for many others, who were forced to ride out the storm in the open.

Poverty has steadily worsened in Haiti over the past century, with an unending spiral of political upheaval, flawed international intervention, frustrated aid attempts and natural disasters. Post-quake reconstruction has barely begun or even been funded; less than 38 percent of the money pledged for rebuilding has been delivered, including a promised $1.15 billion from the United States.

Aid workers are concerned the storm will worsen Haiti's cholera epidemic, which has killed more than 440 people and hospitalized more than 6,700 others.

U.S. Marines were standing by on the USS Iwo Jima off the coast with relief supplies.