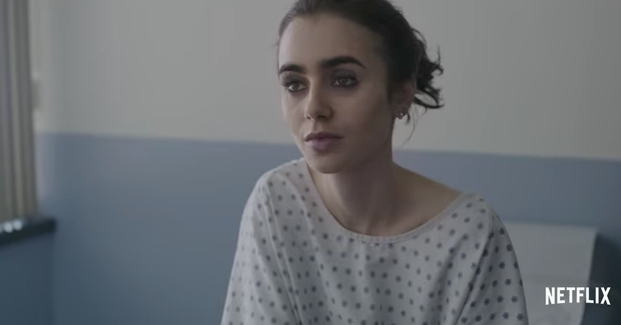 This weekend, Netflix premiered "To the Bone," a semi-autobiographical story from writer and director Marti Noxon about a young woman struggling with an eating disorder.

The movie stars Lily Collins, who battled anorexia as a teenager in real life and was required to drop weight for the role.

Before it was even released, the film sparked controversy. Based on scenes from its trailer, critics raised alarm, claiming the movie could glamorize eating disorders, trigger anyone who's struggled with the illness or body image issues, or spur vulnerable viewers to try these behaviors themselves.

Netflix and its creators stuck by the film and its message, saying its purpose is to start important conversations surrounding eating disorders. The film also includes a warning at the start that it shows graphic depictions.

"My goal with the film was not to glamorize EDs [eating disorders], but to serve as a conversation starter about an issue that is too often clouded by secrecy and misconceptions," Noxon said in a statement. "I hope that by casting a little light into the darkness of this disease we can achieve greater understanding and guide people to help if they need it."

The film succeeds in doing so in certain respects, experts tell CBS News. It sheds light on the complex relationships of family members and the role they play in eating disorder recovery. And there are scenes that dramatize things that should -- and perhaps more often, should not – be said to someone with an eating disorder.

However, when it comes to the movie's portrayal of who suffers from eating disorders and what those struggles actually look like, experts say it doesn't quite mirror the diversity and complexity of real life.

Like the overwhelming majority of mainstream stories about eating disorders, the "To The Bone" centers around a young white woman with anorexia.

"When we talk about eating disorders and eating disorders as a serious public health issue, we need to also talk about how they affect people of all sizes, races, ethnicities, socioeconomic status, men and women, boys and girls," Claire Mysko, CEO of the National Eating Disorders Association (NEDA), told CBS News.

According to NEDA, an estimated 20 million women and 10 million men will have an eating disorder in their lifetime.

Though more research is needed in the area, the organization says that the prevalence of most eating disorders is similar among different racial groups -- non-Hispanic Whites, Hispanics, African-Americans and Asians in the United States -- with the exception of anorexia, which is more common among whites.

Studies also suggests that gay, lesbian and bisexual teens may be at higher risk of binge-eating and purging than their heterosexual peers.

Additionally, other research shows that transgender students are almost five times as likely to report an eating disorder.

"To the Bone" does include a woman of color battling binge-eating disorder and a male character struggling with anorexia.

"But their story lines didn't get a whole lot of play," Mysko said. "Especially the characters of color weren't very well developed in that we didn't get to see much in their experience with eating disorders."

Stephanie Zerwas, PhD, associate professor and clinical director of the Center of Excellence for Eating Disorders at the UNC School of Medicine, said it is encouraging that the film did include some diversity in its depictions but agrees that it certainly could have gone further.

"It's not fully representative but it's a first step and hopefully it will lead to other fictional representations of eating disorders," she told CBS News.

The movie also focuses on an eating disorder in one of the most extreme forms -- a woman with anorexia near death.

"It's that gap between what works in a movie and what works in real life," Zerwas said. "We see really dramatic situations all the time in movies and we go to that to have an extreme experience sometimes, but that doesn't mean that that's how real life goes."

Mysko notes that these depictions in the media can have harmful consequences in real life.

"We hear this a lot through our help lines," she said. "People contacting us reaching out for help after struggling for a long time and not recognizing themselves in the depictions they see in film and television. It's this idea that 'I'm not that sick' or 'not sick enough' to reach out for help is really problematic. We really want to advocate as an organization for more diverse representation."

Still, both experts agree that the film is starting important conversations around eating disorders.

"I am encouraged at the level of discussion that this film has sparked and I hope that we can push for more diverse representations and really challenge the stereotypes about eating disorders," Mysko said.

If you or someone you know is suffering from an eating disorder, seek professional help or call the National Eating Disorders Helpline at (800) 931-2237. NEDA's website also offers a number of resources for people living with eating disorders and their families.