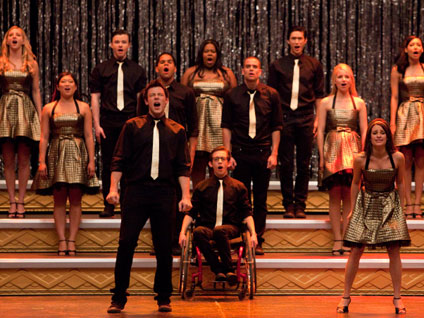 NEW YORK (CBS) For the characters on "Glee," it was all about the journey.

The show wrapped up its mostly strong first season Tuesday night, tying up many of the overarching plot points tidily and leaving the door open for next year.

(Be warned, plot spoilers are below.)

The entire season led up to New Directions' trip to regionals, where it was to take on rival show choir group, Vocal Adrenaline. The group's hopes of standing a chance of winning (the only way the school's principal won't disband the club) are dashed when the group learns that glee-hating Sue Sylvester will be on the judges' panel.

The group meets at Mr. Schuester's apartment to choose songs to sing for regionals, but the pow-wow turns into a sobfest when they realize that if they lose and New Directions is over, they all won't be together anymore - the Cheerios and the football players will go back to being popular and the other losers will, well, stay losers.

Mr. Schue seeks advice from Emma, who only reveals that she's now dating her dentist. While driving home from school, he hears a Journey song on the radio and is struck by inspiration - it's not about whether the kids win or lose at regionals, it's about - wait for it - the "journey" they're on to get there.

He shares this burst of musically-induced inspiration in one of his trademark choir room motivational speeches, and the kids vow to give regionals all they've got - which includes a medley of Journey songs (did I mention this episode is called "Journey"?).

New Directions takes to the stage and gives a fantastic performance - though, as usual, it's mostly the Rachel and Finn show, guest-starring everyone else.

The group gets off stage and a now-suddenly-ready-to-pop Quinn (seriously, she looked barely pregnant until last week's episode) is confronted by her mother, whom we haven't seen since she kicked her daughter out of the house earlier this season. She left Quinn's father and wants her daughter to come home. Quinn responds in the best way an expectant 16-year-old can: with her water breaking.

Vocal Adreneline (and the fantastic Jonathan Groff) perform Queen's "Bohemian Rhapsody" for their regionals performance, which is interspersed with quick cuts to Quinn, with Mercedes and baby-daddy Puck by her side, in the hospital giving birth. The back-and-forth between the flashy performance and the dramatic birth scene worked perfectly. Vocal Adreneline gives a rockin' performance, and Quinn gives birth to a baby girl, whom Puck names Beth.

Back at regionals, judges Olivia Newton-John, Josh Groban, local newsman Rod Remington and Sue Sylvester deliberate. The others make fun of Sue for not being a real celebrity, and criticize New Directions for having lower production values than its competitors. Sue finds herself defending the group she's vowed to destroy all season.

Meanwhile, back at the hospital, Vocal Adrenaline coach Shelby, who lamented missing out on a relationship with biological daughter Rachel earlier in the episode, adopts Puck and Quinn's baby, neatly tying up the Quinn-is-pregnant plotline along with giving Shelby the daughter she so badly wanted.

Back in the school auditorium, the glee kids sing Mr. Schuester a sweet and sad performance of Lulu's "To Sir, with Love" to show their appreciation. He teared up, and so did I.

Mr. Schuester also confesses to Emma that he loves her, and gives her a long kiss that will hopefully make her forget that dentist (though, probably not - Entertainment Weekly reports that John Stamos might take on the role next season).

Sue's conscience gets the best of her (and we see in flashback that, in a moment of kindness, she voted for New Directions to win during regionals) and convinces Principal Figgins to give the glee club another year.

In honor of their club's survival, Mr. Schuester breaks out a ukulele and, accompanied by Puck, performs for his kids - a beautiful rendition of Iz Kamakawiwo'ole's version of "Somewhere Over the Rainbow," a perfect way to end the episode and the season.

All in all, "Glee" wrapped up on a high note, leaving some of the season's less-appealing plotlines behind and heading towards the promise of more performances and more amazing Sue Sylvester one-liners next season.