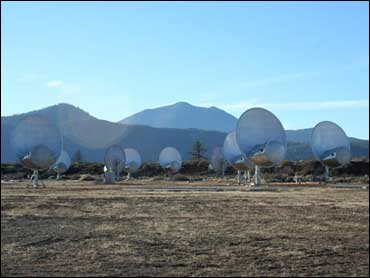 From the perspective of an extraterrestrial, I wonder if there would be much difference between a human and a deer.

You might think that's an odd question, but on Wednesday, as I stood in an open plain here, at around 5,000 feet, with Mount Shasta visible far off to the north, a stunning blue sky, I watched a deer poking around at the base of what on its own would be an odd piece of astronomy equipment.

In fact, though, the 20-foot-diameter antenna the deer was investigating was just one of 42 identical units that make up the Allen Telescope Array, currently the world's first large-scale telescope meant for the full-time use of the Search for Extra-Terrestrial Intelligence (SETI) project.

The ATA, as it's called, opened in late 2007 with these first 42 antennas. Designed to work in pairs, the antennas are intended to work together to mimic the stellar investigatory capacity of far larger single dishes. And the ATA is hardly finished. In fact, it is planned to eventually be made up of 350 of these antennas.

And while the famous Arecibo uber-antenna in Puerto Rico, with its 73,000 square meter size, has seven times the collecting area of the full ATA, the telescope here--the array in its entirety is a telescope--will be able to look at 2,500 times as much sky as Aricebo.

For my visit, resident astronomer Rick Forster took me around, explaining the history of the facility, as well as how it is used today.

Originally, the Hat Creek Radio Observatory--the official name of this facility--was a joint effort by UC Berkeley, the University of Illinois at Urbana, and the University of Maryland, called BIMA. It had ten 20-foot-diameter antennas that operated in concert to create a millimeter-wave radio interferometer.

But eventually, that project moved on, and now, Hat Creek is the home to the ATA, and for the same reason that BIMA was here: it is one of the few places in North America that provides astronomers hoping to scan the skies with little-to-no terrestrial radio interference.

That's because the facility is bounded by the Cascades on one side and a fault scarp to the east.

Of course, for the folks who live here, that means no cell phone service, and they're pretty much out of luck for listening to the radio or watching broadcast TV.

But since what these scientists want is to do serious astronomy, it's fair to say that's a trade they're willing to make.

To be sure, however, their hope for radio silence is dashed by the ever-present broadcast satellites that scream overhead. And those mean that there are a series of frequencies that simply aren't available for scanning.

The Allen Telescope Array has been funded so far mainly by Microsoft co-founder Paul Allen, and it's hoped he will be the benefactor for the future, as well.

Forster said that the original 42 antennas cost around $25 million to put up, and that while no additional funding has yet been acquired, they are in negotiations for the money to expand the array to about 128 antennas.

You may be familiar with other large-scale radio observatories. Perhaps the most famous is the Very Large Array, in New Mexico, which comprises 27 giant dishes.

Like ATA, SETI makes use of the Very Large Array. But the chief difference is that the SETI folks only get to use VLA once in a while. At ATA, however, they are always on. And that means, the SETI folks think, that their goal of tracking down E.T. is now getting a serious jump start.

Forster explained that at the full 350 antenna capacity, the SETI project will have the ability to "see" transmissions from something as large as Aricebo from as much as 1,000 light years away, meaning that if there are aliens within that distance and they have their own SETI projects going on that are broadcasting signals like we are, there's a much better chance we'll meet up eventually, now that a tool like the ATA is available.

Of course, the array here is also available simultaneously for other astronomy, but thanks to Allen's interest in finding extraterrestrials, SETI is the bread-winner here.

"Without SETI, it would never have happened," Forster said of the ATA's creation. "Since BIMA left, this luckily came along. So, yeah, it's hugely important for the existence of the observatory.

When the funding comes in for more antennas, Forster explained, the facility has a team of two techs that can put them together at a rate of about two a week. They cost about $150,000 each, a number that is cheap in the business. And they're provided by a guy in Idaho Falls, Idaho, who specializes in making large-scale satellite dishes.

Radio waves that come screaming in from outer space are captured by a receiver called an ultra-wide band log periodic feed. Forster said that electrons in the radio waves bounce off the main reflector, then bounce again off the sub-reflector and arrive at the focus of the receiver, a spot about 80 percent or so along its jagged length.

Then, through a multi-step process, those radio waves are transmitted to the scientists' computers nearby for analysis.

Ultimately, said Forster, the entire array is about doing exactly this job.
"The whole telescope is just to get that reflective surface...pointing in the right direction."

And while many large-scale telescopes require complexities for analyzing and collecting data, the ATA is quite simple, and thus, elegant, Forster said.

Eventually, the full 350-antenna array will cover about 90 acres, and be much denser than it is today, at 42 antennas.

Until then, the search for E.T. will have to make do with what is available here. But once Allen, or other benefactors come through with the money, we may just discover once and for all that we are not alone.