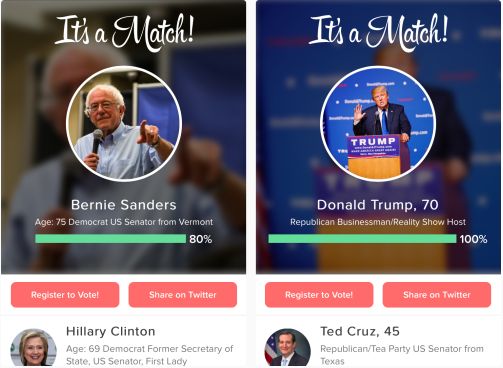 Ever dreamed about swiping right on Tinder and getting matched with Bernie Sanders or Ted Cruz? Now's your chance.

As the 2016 election season heats up, Tinder is getting into the political business with an initiative called "Swipe the Vote," which lets users swipe left or right on a series of political issues and then matches them with a candidate.

"First it was Bernie supporters, then it was Rubio," reads a post on Tinder's blog. "We've been amazed by the amount of users expressing their political views with matches during this presidential campaign. That's why we decided to build Swipe the Vote."

Some Sanders supporters earlier this year were blocked from the dating app Tinder after inundating men with pro-Sanders messages.

The new politics feature was put together in concert with Rock the Vote, the group that seeks to increase young voter participation in elections.

The app takes user through 10 different issues, asking them to swipe the same way they would on potential romantic partners: right for yes, left for no. At the end of the issue questions, the app matches users with a candidate. Issue questions range from "Drill for oil and gas in the U.S.?" to "Legalize marijuana?" or "Keep same-sex marriage legal?"

After matching with a candidate, the app directs users to register to vote with Rock the Vote.