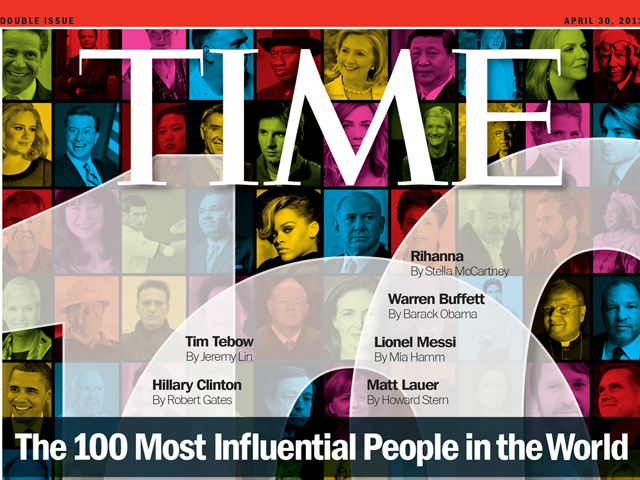 (CBS News) Time magazine announced its 100 most influential people in the word on Wednesday, and this year's list features a host of entertainers, political leaders, and even controversial figures.

As always, Time magazine asks well-known figures to write the entries for the new list of influential people.

Here are some highlights:

Matt Lauer by Howard Stern: "We all wondered, Was it over? It's over, it's over, he's losing his hair! It's got to be over! But we were wrong! ... He was still the smartest, the strongest, the classiest.... No wonder NBC is paying someone $25 million a year and it ain't me!"

Rihanna by Stella McCartney: "She's one of the coolest, hottest, most talented, most liked, most listened to, most followed, most impressive artists at work today, but she does it in her own stride.... This is the beginning for Rihanna.... She is just getting going, so watch out. "

Warren Buffett by Barack Obama: "[Warren] uses his stature as a leader to press others of great means to do the same. The Sage of Omaha has handed down plenty of lessons over the years. Today, at 81, he reminds us that life is not just about the value you seek. It's about the values you stand for."

Tim Tebow by Jeremy Lin: "[Tim] is unashamed of his convictions and faith, and he lives a life that consistently reflects his values, day in and day out.... As athletes, we pour our hearts into winning games. Tim is a reminder that life is about much more than that."

Tell us: What do you think about Time magazine's list?