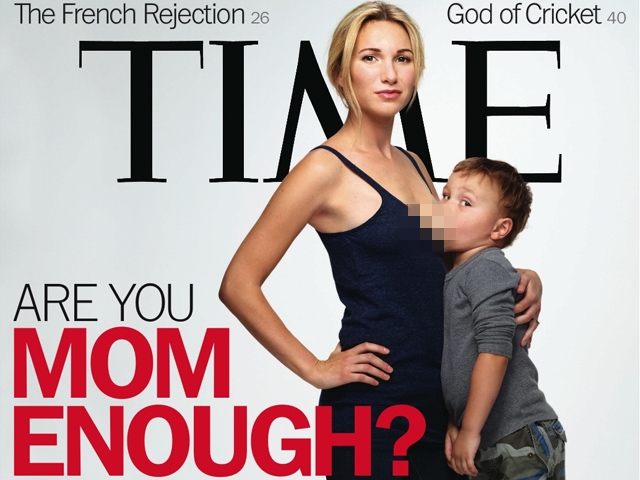 (AP) NEW YORK - Shocking or no big deal? A woman breastfeeding her 3-year-old son is the cover photo of this week's Time magazine for a story on "attachment parenting," and reactions ranged from applause to cringing to shrugs.

The photo showed Jamie Lynne Grumet, 26, a stay-at-home mom in Los Angeles who says her mother breastfed her until she was 6 years old. She told the magazine in an interview that she's given up reasoning with strangers who see her son nursing and threaten "to call social services on me or that it's child molestation."

"People have to realize this is biologically normal," she said, adding, "The more people see it, the more it'll become normal in our culture. That's what I'm hoping. I want people to see it."

Some questioned why the magazine used the photo of Grumet, a slim blonde pretty enough to be a model, to illustrate a story about a style of childrearing that's been around for a generation. The issue includes a profile of the attachment parenting guru, Dr. Bill Sears, who wrote one of the movement's bibles, "The Baby Book," 20 years ago.

Mika Brzezisnki, co-host of MSNBC's weekday morning program "Morning Joe," suggested on the air that the cover was needlessly sensational: "I'll tell you why it bothers me — because it's a profile of Bill Sears!"

On Twitter, the cover inspired X-rated jokes along with concerns that the child might be teased when he's older. But on many message boards, there was debate about whether it's OK to breastfeed beyond babyhood.

Bobbi Miller, a mother of six who lives in Arkansas, expressed disapproval in a tweet and said in a phone interview, "Even a cow knows when to wean their child." Of the cover, she said: "Why would this even be out there? It's ludicrous. It's almost on the verge of voyeurism."

But Bettina Forbes, co-founder of an organization called Best for Babes that promotes breastfeeding and supports women who want to nurse their children beyond babyhood, said she hopes the cover "will make mainstream America less squeamish" about women breastfeeding children of any age. "It's high time we talk about these things," she said.

Reaction to the cover underscored a cultural rift between traditional childrearing and what some have deemed "extreme parenting." The attachment philosophy encourages mothers to respond to their babies' every cry and form close bonds with near-constant physical contact through "co-sleeping" (letting them sleep in the bed with parents rather than in cribs) and "baby-wearing" (carrying them on slings instead of pushing them in strollers).

Retail chains including Target, Wal-Mart and Safeway did not immediately respond to requests for comment on whether the magazine, which goes on sale Friday, would be displayed in stores.

Time Managing Editor Rick Stengel said he had not heard of any retailers concerned about displaying the cover. But he acknowledged that the image is "provocative. We're posing an interesting question about a subject that couldn't be more important — how we raise our children. People have all kinds of mixed feelings about that."