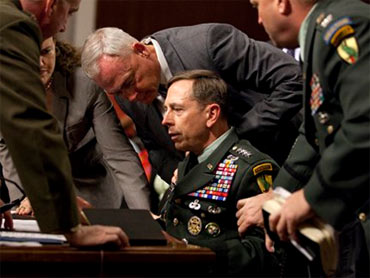 Congress needs to give congressional witnesses a break. A potty break.

General David Petraeus, who as CENTCOM Commander oversees forces in both Iraq and Afghanistan, is back before the Senate Armed Services Committee today testifying about the difficult situation in Afghanistan. It is an important hearing. There are serious questions if the military can push back the Taliban and secure that troubled country before President Obama's deadline of next summer to begin withdrawing American troops. Petraeus had to return today because yesterday's hearing was stopped after he collapsed from dehydration at the witness table.

The general was answering a question from Senator John McCain when he turned pale, seemed to lose his train of thought and then crumpled onto the table. Aides came to his assistance and he was taken from the room. A doctor saw to him immediately and after a few cups of water and some bananas, he returned to tell senators he had just gotten dehydrated and he was fine.

Watch CBS News Videos Online
Petraeus had just returned from a grueling weeklong overseas trip and had skipped breakfast. But why had he chosen not to eat breakfast or drink anything? Perhaps in part it was because like everyone who has testified before Congress he is aware of the bizarre practice of making witnesses testify for hours without a bathroom break.

These hearings can be confrontational and there are always power issues and witnesses don't like to show weakness by asking to take a bathroom break and they are almost never offered. And so Petraeus made the logical if unhealthy choice to not eat or drink before the hearing.

It was doubtless the same advice given to five oil company executives who were being grilled at the same time across the Capitol at a House hearing into the gulf oil spill. They were kept at the witnesses table for five hours without a break. Members of the committee repeatedly left the room through a back door but the witnesses couldn't leave their assigned seats.

If this kind of cruel and unusual punishment were reserved for oil company executives perhaps it could be justified but it has become routine practice at congressional hearings for cabinet officers, economists, scientists, business leaders and judicial nominees.

They often go for hours on end without being allowed to take a break. Sometimes a committee chairman will ask a witness if they need a few minute recess and the answer is almost always "no" as the witness doesn't want to show weakness, even as his bladder may be screaming for relief.

While Congress has a responsibility to hold the feet of witnesses to the fire they also should not be oblivious to the calls of nature.

It is time for this madness to stop.

When the commander of US forces in Iraq and Afghanistan, a model of middle age fitness, faints on national television, things have gone too far.

Grill the witnesses if you like. Make them sweat. But give them a glass of water and at least every few hours let them go the bathroom.

Bob Fuss is CBS Radio News' Capitol Hill Correspondent. You can read more of his posts in Hotsheet here.
View CBS News In