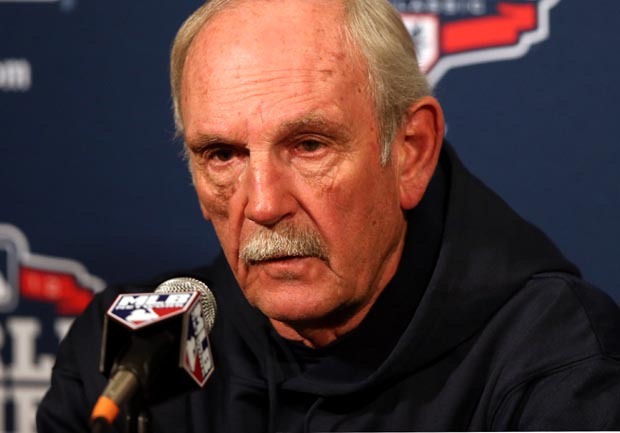 DETROIT Jim Leyland is returning next year as manager of the Detroit Tigers.

The team and its manager quickly ended any remaining speculation about his status by announcing Tuesday that Leyland's contract was extended through 2013. He managed on a one-year deal this year and led the Tigers to the World Series, where they were swept by the San Francisco Giants.

"Detroit is a tremendous baseball town and I couldn't dream of a better place to manage," Leyland said in a statement. "Tigers fans and the people of Michigan have supported us so well during my time here, I can't even begin to express how much that means to me."

The team said Leyland's coaching staff also has been invited to return.

Next season will be Leyland's 22nd as a major league manager and his eighth in Detroit. He's led the Tigers to the postseason three times and the World Series twice.

The 67-year-old Leyland leads all active managers with 1,676 wins, a total that puts him 15th on the career list.

"Jim is as fine a manager as there is in baseball, he has done a fantastic job for the organization and we are thrilled to have him back managing the Tigers in 2013," general manager Dave Dombrowski said. "I have a tremendous amount of respect for Jim and his ability to lead our club on the field. I am confident that you will not find a harder working or better prepared manager in the game."

The news that Leyland is returning will go over well in the Tiger clubhouse, writes CBSSports.com's Danny Knobler.

"I, for one, am extremely glad he's coming back," Justin Verlander said, even before the decision had officially been made.

Detroit faced high expectations this year after signing slugger Prince Fielder in the offseason. By mid-September, Leyland's future seemed uncertain as the Tigers struggled to keep pace in the AL Central, but they overtook the Chicago White Sox to win the division and then beat Oakland and the New York Yankees in the American League playoffs.

By the time the World Series started, Dombrowski had indicated Leyland would be welcome back in 2013, but both the manager and GM sought to postpone any public discussion of his status until after the season.

NOTES: The Tigers exercised a $6 million option on 2B Jhonny Peralta and a $3.5 million on RHP Octavio Dotel. Each had carried a $500,000 buyout.