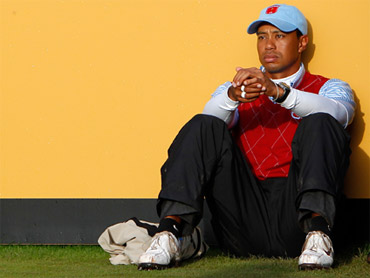 Tiger Woods' humbling return to the public eye, from his televised confession to a winless season on the golf course, was voted the sports story of the year by members of The Associated Press.

The fallout from Woods' admission of infidelity edged a very different sort of story: The New Orleans Saints winning their first Super Bowl championship, giving an emotional boost to their hurricane-ravaged city.

It was late 2009 when Woods' pristine image unraveled after he crashed his SUV into a tree outside his home, unleashing salacious revelations of extramarital affairs. The story was a late addition to last year's voting and wound up fifth.

Special Section: The Return of Tiger

But the twists and turns weren't over for Woods. Many more developments were still to unfold in 2010.

There were 176 ballots submitted from U.S. news organizations that make up the AP's membership. The voters were asked to rank the top 10 sports stories of the year, with the first-place story getting 10 points, the second-place story receiving nine points, and so on.

The Woods saga received 1316 points, with the Saints' title getting 1215 and the NBA free agency frenzy coming in third with 1085.

1. Tiger Woods: Woods returned to public view with a 13Â½-minute statement in February, then came back to golf at the Masters in April with a fourth-place finish. That would be one of his few highlights on the course - Woods went winless on the PGA Tour for the first time in his career and lost his No. 1 ranking for the first time in years. In August, he and Elin Nordegren divorced.

2. Saints Win: New Orleans residents loved their Saints for not abandoning the city after Hurricane Katrina, but it was hard to imagine the team bringing much joy on the field after 42 mostly losing seasons. Then Drew Brees and Co. upset the mighty Indianapolis Colts in their first Super Bowl, to the delight of French Quarter revelers and fans nationwide who adopted the Saints.

3. Free Agency Frenzy: NBA fans were captivated by the mystery of where MVP LeBron James and other marquee free agents would land. Few would have guessed that three of them would sign with the same team: the Miami Heat, who became basketball's Evil Empire by adding James from Cleveland and Chris Bosh from Toronto to Dwyane Wade.

4. World Cup: A World Cup of firsts ended gloriously for Spain and for Africa. South Africa hosted the continent's first World Cup without the pitfalls many predicted. And the Spaniards brought home the first World Cup title to the soccer-mad country with a 1-0 victory over the Netherlands in extra time.

5. Giants Win: The Giants hadn't won the World Series since they moved to San Francisco in 1958 - and since 1954 overall. This didn't seem to be the year to end the drought when they barely squeaked into the playoffs. But with dominant pitching and clutch hitting, they beat the Texas Rangers in five games.

6. NFL Concussions: New posters distributed to teams before the season warned of concussions' dangers in much harsher language than before. Another sign of how big the issue had become: increased reporting of concussions by players. Midseason, the NFL cracked down on helmet hits with huge fines and threatened suspensions.

7. Jimmie Johnson: The NASCAR driver extended his record with his fifth straight Sprint Cup title. Perhaps most impressively, he did it despite not being in top form all season. Johnson became the first driver in the Chase's seven-year history to overcome a points deficit in the finale.

8. Brett Favre: This comeback was nothing like last year's magical run to the NFC title game for the 41-year-old quarterback. His Minnesota Vikings struggled badly, and the NFL launched an investigation into whether he sent lewd photos of himself to a Jets employee. After voting began, his record streak of 297 starts ended.

9. UConn Wins: The Huskies' women's basketball team extended their record winning streak to 78 games with a second straight national championship in April, becoming the first team to post consecutive unbeaten seasons. And Connecticut is a powerhouse again this season.

10. Wooden Dies: The Wizard of Westwood died June 4 at the age of 99. John Wooden coached UCLA's men's basketball team to 10 NCAA championships, including seven in a row from 1967-73 and an 88-game winning streak.