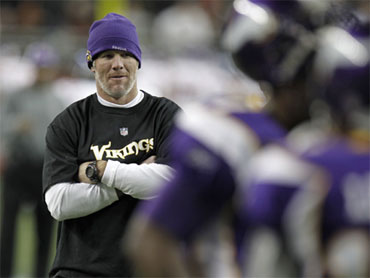 After 297 consecutive starts over 19 seasons, one of the greatest individual streaks in all of sports, Brett Favre ran into an injury he couldn't beat and sat down.

The 41-year-old Vikings quarterback who fought through broken bones, aches, pains and personal grief to play week after week, couldn't make it for the Minnesota Vikings on Monday night. Favre was sidelined by a throwing shoulder too damaged for even him to overcome.

The Vikings hoped Favre, who has started despite a broken foot and elbow tendinitis this season, could do it again when the game against the New York Giants was delayed from Sunday after the Metrodome roof collapsed. That forced the game to be moved to Ford Field, but it was not enough time for Favre to get healthy enough to play.

Leslie Frazier, Minnesota's interim coach, said the plan was for Favre to go through a pregame throwing routine to try and determine if he could play, but the three-time MVP wasn't on the field about 90 minutes before kickoff, and the Vikings announced moments later he was inactive.

"He had numbness in his hand so it wasn't a hard decision," Frazier told Fox television reporter Pam Oliver before kickoff.

It's uncertain if Favre will play again in this, his third comeback season from a brief retirement.

Favre finally came out about 35 minutes before the game started, wearing a T-shirt and warmup pants. He hugged a teammate while receiving a few cheers from the crowd, then stood at the 15-yard line and chatted with Tarvaris Jackson, the new Minnesota starter.

After Minnesota's first drive, Favre looked at photo printouts with Jackson as the Vikings went over strategy.

Ron Jaworski previously held the consecutive starts record for a quarterback, but Favre passed him all the way back in 1999.

"I knew when my streak ended, it was because of a broken leg," Jaworski said. "I knew it was over. It was just kind of interesting following Brett this week. Now that we know it's over, we can kind of look back on it and marvel. I don't know if I can even put words on it."

The crowd in Detroit, where tickets were given out for free, had a chance to witness a bit of history.

"Ahhh, I feel bad for him," said Vikings season-ticket holder JoAnn Brown, who drove 12 hours to see the game in Detroit. "I wish he could've just got out there for the first play and just tossed the ball once to keep the streak."

Both Favre and Frazier had made it clear he would not be given a ceremonial start like that. At 5-7, Minnesota still has a slim chance to make the playoffs.

The quarterback was injured when the Bills' Arthur Moats hit him square in the back and sent him to the turf on the third play from scrimmage last weekend. The day after, the rookie linebacker said he had mixed emotions about perhaps being the player who ended Favre's streak.

"I don't want to see anybody hurting and not playing any more. If he plays, that would be a good thing," Moats said. "But if he doesn't, and I was the guy to end the streak, all right. That's a little notable, yeah."

"I grew up in Baltimore and witnessed the Cal Ripken streak, but football is a completely different sport," Schwartz said. "At quarterback, you have a target on you. It's a tough, physical job and you aren't ever delivering the blow. It takes a self-sacrifice to stand in there and take a blow to make a play for the team."

As for Ripken, he took a moment to congratulate Favre as well.

"Brett has had an incredible career and his consecutive games streak is remarkable," he said through a spokesman. "As a football fan I cannot fathom his accomplishment and I appreciate his dedication to and passion for the game. He is a true gamer and has provided us all with a lot of wonderful memories."

Season No. 20, though, has been one of Favre's toughest. He's taken a beating on the field and played not only through two fractures in his left foot and elbow tendinitis but 10 stitches in his chin along with aches in his neck, back and calf before he was crunched by Moats.

His stats, including a 69.6 QB rating, haven't been so great, either.

He's also been the subject of an NFL investigation into allegations he sent inappropriate messages and photos to a game-day hostess when both worked for the New York Jets in 2008. The investigation has lasted for more than two months now, and the lawyer for Jenn Sterger was vocal last week in trying to get a ruling announced.

Through it all, Favre has led his team on the field, extending his streak further and further. Colts quarterback Peyton Manning now holds the longest streak at 205 games. He would need to keep it going for another 5½ years to surpass Favre.

"It's beyond reason. It's ridiculous," said Seahawks quarterback Matt Hasselbeck, who backed up Favre in Green Bay years ago. "He's gotten lucky a little bit too, but he's just the toughest guy in the world."

It's a record that Favre cherishes. Over the years, he has played through a separated shoulder, concussions, a sprained knee and a broken thumb - and he also took the field following the sudden death of his father and his wife being diagnosed with breast cancer.

"I far exceeded my goals," Favre said last week. "I don't know if any player comes in and says, 'Hey, I have a goal of playing 300 straight games.' To have done that with playoffs (321 games), I don't know how many consecutive starts, it's a lot, and had it ended several weeks before or last year, it is still quite an accomplishment."

He's been listed as questionable on the injury report heading into a game several times this season. But it was clear as soon as Moats blindsided him that this injury was more serious. Favre's injury, a sprained SC joint, is a rarity in sports, one that doctors say occurs most often when a person's body slams against the steering wheel in an auto accident.

Favre said Wednesday he was having difficulty putting on a shirt or pulling on socks and he did not throw a proper pass all week in preparation for the Giants.