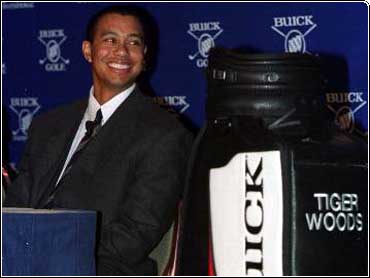 In what had to be a first in pro golf, Tiger Woods and a Buick executive stood on a dais in a hotel ballroom and removed a silver cloth that had been covering a leather golf bag, much like civic leaders unveiling a monument.

The corporate types in suits applauded. "I hope you can fit all your clubs in there," the executive said.

"Don't worry," Woods shot back. "Stevie will be carrying it."

While caddie Steve Williams will be handling the black, white and red bag with Buick's logo splashed all over it, Woods will be getting richer, pocketing the reported $20 million to $25 million he'll get in the sponsorship deal that was announced Wednesday.

Woods' commitments under the deal will begin at neighboring Torrey Pines in February, where he'll defend his Buick Invitational title.

Next to the hat, a player's bag is the most visible and attractive to corporate sponsors. Woods has carried a Titleist bag since turning pro, but bidding was under way when Titleist signed a new deal with the 23-year-old star in which it gave up the rights to use him in advertisements.

Woods even got the keys to a new supercharged car, and another Buick executive promised that somewhere down the road, so to speak, Woods will get to suggest some design touches to what will be called the "Tiger Special Edition."

"It's not a bad concept every time I come to Torrey Pines I get a new car," cracked Woods, 23, who's coming off the best season in more than 40 years.

"Obviously this is a great deal, and more importantly, a great relationship that we're going to build on from here. I'm very excited about this. I can't wait. I've always been a very creative person."

Whatever input Woods comes up with, "My neighbors probably won't like it. It'll be pretty loud."

By having Woods as a pitchman, Buick clearly hopes to draw younger customers. Woods even alluded to it, mentioning how Buicks have been "something more for parents" than young people.

"I'm hoping to broaden that scope

Just then, his parents walked in and took seats in the front row.

"It's about time you got here," Woods jokingly chided them.

Woods wouldn't divulge specifics of the deal, other to say he'll play "a couple of (Buick) tournaments" a year. As for the money he'll make, "I'm going to keep that private. I'm not going to ask you how much you make," he said in response to a question at a news conference.

Like Woods, Buick officials wouldn't discuss details, other than it's a five-year deal.

"He really prefers we don't say anything, so I've got to defer to his wishes," Buick general manager Roger Adams said.

Aams said the number of Buick tournaments Woods plays in will vary from year to year.

"It's more in the spirit of best efforts," Adams said. "We're trying to build this relationships. We think he will appear when we ask him to."

Buick became the first corporate sponsor of the PGA Tour, in 1958.

Woods closed out the year with four straight victories and won five in his last six events, including the PGA Championship. He won eight PGA Tour events and 10 tournaments overall, setting a single-season earnings record at $6,616,585. He became the first player with eight PGA Tour wins in one year since Johnny Miller in 1974.