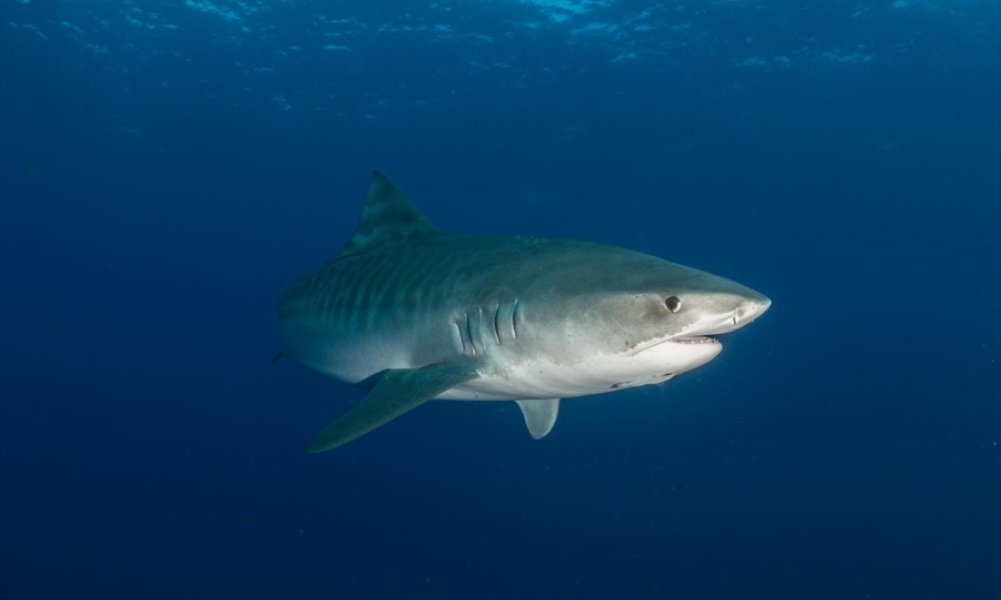 It turns out that tiger sharks are more like birds than fish when it comes to their migration patterns.

Using satellite tags, researchers writing in this week's Scientific Reports found that tiger sharks make a more than 4,660-mile, roundtrip journey between two vastly different ecosystems - the coral reefs of the Caribbean and the open waters of the North Atlantic.

"These repeated journeys were very unexpected," said James Lea, who along with Brad Wetherbee and Mahmood Shivji were part of the study and work out of Nova Southeastern University's Guy Harvey Research Institute in Florida. "The tiger shark has traditionally been considered a coastal species, and it is rare among sharks to so easily and habitually switch between the two vastly different environments."

One tiger shark, nicknamed Harry Lindo, traveled more than 27,000 miles, the longest distance documented for a tiger shark and possibly the longest ever published for a shark.

"It is truly remarkable," said conservationist Guy Harvey, who is also an author on the paper and co-led the project's tagging work, which took place near Bermuda, in collaboration with the Bermuda Shark Project.

Before the emergence of tagging technology, details of the tiger shark's movements and migrations were a mystery because they are difficult to track for more than a few months. They are considered near threatened by the International Union for Conservation of Nature due to their being killed for the fin trade. But increasingly scientists are turning to tagging. A tagged great white shark has become a Twitter star, with online fans following its movements along the East Coast.

"Understanding how these animals use the oceans is the first step toward effective conservation," Harvey said. "Protecting migratory species is a great challenge because they can be found in such a wide area. Protecting the areas where animals, such as tiger sharks, spend the most time is a tractable goal once those areas have been identified."

For this project, the tags the team attached to sharks near Bermuda lasted in many cases more than two years, and in some cases more than three years, sending satellite position data each time an animal surfaced.

The researchers were able to show that adult male tiger sharks in the Atlantic repeatedly spend their winters in Caribbean island locales including the Bahamas, Turks and Caicos Islands, and Anguilla. Then, during summers, they travel far into the North Atlantic, often more than 2,174 miles and as far north as Connecticut, though well offshore in nearly the middle of the ocean.

"Even though they've got a whole range of islands to choose from, it seems like each animal has its favorite winter spot," Shivji said.

It remains an open question as to why the sharks keep coming back to the Caribbean.

Female tiger sharks are common in the Caribbean in the winter, so the region may just be the best place for male tiger sharks to find dates. They could be going north again in search of young loggerhead turtles that also migrate that direction.

"There's got to be something really good up there to make the sharks undertake such massive, repeated swims, but exactly what is a puzzle," Shivji said.

Such migrations are unusual in sharks, and more typical of turtles and especially birds. There are several global travelers in the avian world, like the blackpoll warbler, the Cory's shearwaters and sooty shearwaters, which all make long-distance migrations between nesting sites and foraging areas.

Carl Meyer, of the Hawaii Institute of Marine Biology, who did not take part in the study, said these "are important new insights into tiger shark biology in the Atlantic."

"There are some interesting parallels here between long-distance migrations by birds and sharks. There are many bird species that overwinter in warm regions, and then migrate to highly-productive temperate regions during summer to take advantage of abundant food resources," Meyer said in an email interview. "Such migrations evolve because the cost of the long-distance migration is outweighed by the energy gained by foraging in highly-productive areas. It is certainly possible that these Atlantic tiger sharks are migrating to open-ocean areas to forage, but unlike birds, feeding in sharks is difficult to observe directly."

Meyer said said his team sees some long-distance offshore movements by tiger sharks in Hawaii but that the "species appears to be more resident in coastal areas than tiger sharks tracked in the present Atlantic study."

One of the only other instances in which researchers have found a broadly similar, repeated migration pattern between coastal and distant open water regions is with the warm-bodied, great white and salmon sharks in the Pacific Ocean. White sharks migrate in the winter from the California and Baja coasts to a mid-Pacific open water area dubbed the White Shark Cafe.

"We joke that tiger sharks, not being media stars like white sharks, wouldn't be comfortable in a cafe and prefer to hang out in their truck-stop in the mid-Atlantic," said Wetherbee.