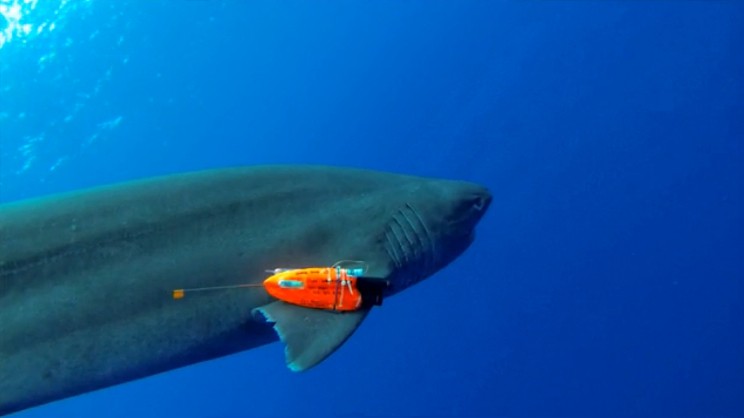 New research on sharks is challenging our views of the predators. Over the last year, scientists in Hawaii tagged and tracked more than 30 tiger sharks. The findings show they gather in popular areas for surfers and swimmers, reports CBS News correspondent Chip Reid.

In the summer of 2013, Kiowa Gatewood was attacked by a 10-foot tiger shark while sitting on his surfboard, just offshore of the island of Oahu in Hawaii.

Gatewood said the shark hung on before it dragged him down under water.

"I saw my reflection in his eyeball, and it's scary, too, because their eyeballs are just straight black," Gatewood said.

The attack lasted only seconds but the damage to his leg was severe.

"If I bend my leg, you can see the jaw line go around," Gatewood said, tracing the scar.

The shark's bottom teeth made the same shape on his surfboard.

His board help save at least a limb -- maybe his life.

"That's why it's special to me," Gatewood said.

In past decades, after a shark attack in Hawaii officials would kill as many sharks as they could find in that area.

Carl Meyer, marine biologist at Hawai'i Institute of Marine Biology Shark Research Group, has been studying sharks for more than 20 years and specializes in debunking myths about the creatures. He said all that killing was a waste of time and a waste of sharks.

"There is no evidence that sharks hang out on one particular beach waiting for people to go into the water so they can bite them," Meyer said.

He knows that because he has attached high-tech tracking devices and cameras to sharks throughout the Hawaiian islands.

Over the past 25 years shark attacks have averaged only about three a year in Hawaii. And while there have been 29 attacks since 2012, Meyer said it's too early to say there's an upward trend.

"To keep it in perspective, your drive to the beach is actually a far more risky activity than going surfing or snorkeling," Meyer said.

Meyer has also dispelled myths about shark cages -- a popular tourist attraction in Hawaii. Some critics have claimed that sharks attracted to the cages follow the boats back to shore, endangering surfers and swimmers.

"When the boats leave, all they do is go from the surface down to the bottom at those particular sites," Meyer said.

And the sharks that frequent the cages almost never include tiger sharks, which he said are responsible for most attacks in Hawaii.

CBS News decided to take a look for ourselves.

"Happy sharks. They are dying to eat you, I mean, dying to meet you," said Capt. Matt Voorhies, laughing.

In fact, there was not a tiger shark in sight -- yes, lots of sand bar sharks and their bigger cousins, the Galapagos, which are fearsome looking, but not known to attack people.

When sharks do bite people in the open ocean, Voorhies said it's generally a mistake.

"Most people survive and live to tell the tale," Voorhies said. "It's because if they did like our flavor it would be an all the time thing. Not a mistaken identity."

As for Kiowa Gatewood, it took him eight months to recover, but today he's back in the water. Now he's not frightened, just more aware.

Gatewood said he's gained respect for sharks and has no ill will toward them. After all, he said, the ocean is their home, not his.